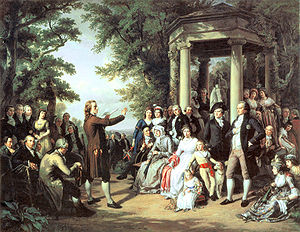 Weimar’s Courtyard of the Muses (1860) by Theobald Freiherr von Oer. Schiller reads in the gardens of Tiefurt Castle, Weimar. Amongst the audience, seated at the far left, are Wieland and Herder, while Goethe stands before the pillar, at right.

Weimar Classicism (German: Weimarer Klassik) is a German literary and cultural movement, whose practitioners established a new humanism, from the synthesis of ideas from Romanticism, Classicism, and the Age of Enlightenment.

The Weimarer Klassik movement, lasted thirty-three years, from 1772 until 1805, and involved intellectuals such as Johann Wolfgang Goethe, Johann Gottfried Herder, Friedrich Schiller, and Christoph Martin Wieland; and then was concentrated upon Goethe and Schiller during the period 1788–1805.

The German Enlightenment, called “neo-classical”, burgeoned in the synthesis of Empiricism and Rationalism as developed by Christian Thomasius (1655–1728) and Christian Wolff (1679–1754). This philosophy, circulated widely in many magazines and journals, profoundly directed the subsequent expansion of German-speaking and European culture.

The inability of this common-sense outlook convincingly to bridge “feeling” and “thought”, “body” and “mind”, led to Immanuel Kant's epochal “critical” philosophy.[clarification needed] Another, though not as abstract, approach to this problem was a governing concern with the problems of aesthetics. In his Aesthetica of 1750 (vol. II; 1758) Alexander Baumgarten (1714–62) defined “aesthetics”, which he coined earlier in 1735, with its current intention as the “science” of the “lower faculties” (i.e., feeling, sensation, imagination, memory, et al.), which earlier figures of the Enlightenment had neglected. (The term, however, gave way to misunderstandings due to Baumgarten’s use of the Latin in accordance with the German renditions, and consequently this has often led many to falsely undervalue his accomplishment.[1]) It was no inquiry into taste — into positive or negative appeals — nor sensations as such but rather a way of knowledge. Baumgarten's emphasis on the need for such “sensuous” knowledge was a major abetment to the “pre-Romanticism” known as Sturm und Drang (1765), of which Goethe and Schiller were notable participants for a time.

Following Goethe's competition with and separation from Wieland and Herder, the movement Weimar Classicism is often described to have occurred only between Goethe's first stay in Rome (1786) and the death of Schiller (1805), his close friend and collaborator, underrating especially Wieland's influence on German intellectual and poetic life. Therefore, the Weimar Classicism could also be started with the arrival of Wieland (1772) and extended beyond Schiller's death until the death of Wieland (1813) or even of Goethe himself (1832).

In Italy Goethe aimed to rediscover himself as a writer and to become an artist, through formal training in Rome, Europe's 'school of art'. While he failed as an artist, Italy appeared to have made him a better writer.

Schiller's evolution as a writer was following a similar path to Goethe's. He had begun as a writer of wild, violent, emotion-driven plays. In the late 1780s he turned to a more classical style. In 1794 Schiller and Goethe became friends and allies in a project to establish new standards for literature and the arts in Germany.

It was named in light of the four authors’ immense significance, and, more particularly, of Goethe's and Schiller's, both of whom resided in the Duchy of Saxe-Weimar at this time, hence the toponymic “Weimar Classicism”. Responding to Johann Joachim Winckelmann’s (1717–1768) Gedanken über die Nachahmung der griechischen Werke in der Malerie und Bildhauerkunst ("Thoughts on the Imitation of Greek Works in Painting and Sculpture"; 1755) and Geschichte der Kunst des Alterthums (History of the Art of Antiquity; 1764),[2] Goethe and Schiller developed a literary pursuit and praxis of the imitation of ancient Greek, classical models, a veritable undertaking of socio-cultural reformation through aesthetic conceptions and values, where organic wholeness and harmony (among other classical values, partly spurred on by the Enlightenment) were of central inspiration and importance.[clarification needed]

By contrast the contemporaneous and efflorescing literary movement of German Romanticism was in opposition to Weimar and German Classicism, especially to Schiller. It is in this way both may be best understood, even to the degree in which Goethe continuously and stringently criticized it through much of his essays, such as “On Dilettantism”,[3] on art and literature. After Schiller's death, the continuity of these objections partly elucidates the nature of Goethe's ideas in art and how they intermingled with his scientific thinking as well,[4] inasmuch as it gives coherence to Goethe's work. Weimar Classicism may be seen as an attempt to reconcile—in “binary synthesis” — the vivid feeling emphasized by the Sturm und Drang movement with the clear thought emphasized by the Enlightenment, thus implying Weimar Classicism is intrinsically un-Platonic. On this Goethe remarked:

“The idea of the distinction between classical and romantic poetry [Dichtung[5]], which is now spread over the whole world, and occasions so many quarrels and divisions, came originally from Schiller and myself. I laid down the maxim of objective treatment of poetry, and would allow no other; but Schiller, who worked quite in the subjective way, deemed his own fashion the right one, and to defend himself against me, wrote the treatise upon ‘Naïve and Sentimental Poetry.’ He proved to me that I myself, against my will, was romantic, and that my ‘Iphigenia,’ through the predominance of sentiment, was by no means so classical and so much in the antique spirit as some people supposed.

“The Schlegels took up this idea, and carried it further, so that it has now been diffused over the whole world; and every one talks about classicism and romanticism—of which nobody thought fifty years ago.”[6]

Centrally, the conception of “harmony” (also “totality” or “wholeness”) — as it was earlier accepted as a fundamental element in Greek culture by German Classicism—profoundly embedded within Weimar Classicism, which developed during a period of social turmoil and upheaval, is neither an aim toward Platonic perfection nor, as promoted by the German Romantics, toward universality, which was systematized later by G. W. F. Hegel. In fact, it is the sole expression of a particular’s singular imperfect integrity.[clarification needed]Similarly, Goethe held that the two polarities of classicism and romanticism may be employed in a work of art by means of excellence and discretion, and that the naïve and sentimental forms of poetry, which are displayed by classicism and romanticism, respectively, remain within a relation of mutual dependence according to which they are limited.

Between 1786 and Schiller's death in 1805 he and Goethe worked to recruit a network of writers, philosophers, scholars and artists to their cause. This alliance later became known as ‘Weimar Classicism’, and it came to form a part of the foundation of 19th-century Germany’s understanding of itself as a culture and the political unification of Germany.

Similar to the binarity noted above is Schiller's treatment of Formtrieb (“formal drive”) and Stofftrieb (“material drive”) when the two of them (which were inspired by Kant's various critiques), via reciprocal coordination—in a “proto-Hegelian” dialectical fashion—give birth to Spieltrieb (“ludic drive”), that is to say, the aesthetic par excellence.[clarification needed] Schiller's elementary attitude toward art is given in “What Difference Can a Good Theatrical Stage Actually Make?” (1784):

[Art] should remain play, but also be poetic play. All art is dedicated to joy, and there is no higher and more serious task than of making people happy. The highest enjoyment, however, is the freedom of the inner life of feeling in the living play of all of its powers.

“I cannot help laughing at the aesthetical folks,” said Goethe, “who torment themselves in endeavoring, by some abstract words, to reduce to a conception that inexpressible thing to which we give the name of beauty. Beauty is a primeval phenomenon [Urphänomen], which itself never makes its appearance, but the reflection of which is visible in a thousand different utterances of the creative mind, and is as various as nature itself.”[6]

These are essentials used by Goethe and Schiller for which it is necessary to understand the course of their project.

In sum, Gehalt and Stoff must coalesce through the creative, aesthetic potential of the artist as a means to manifest Gestalt whereby all faculties converge within the percipient who may thereby participate in apperceptive aesthetic imagination in lieu of the artist's artistic imagination.[clarification needed]

Christoph Martin Wieland was the first writer to arrive in Weimar. In 1772 he was called by the widowed Anna Amalia of Brunswick-Wolfenbüttel, then regent of the Duchy Sachsen-Weimar, to educate her son. Weimar remained Wieland's home until his death. Here, in 1773, he founded Der teutsche Merkur, which under his editorship (1773–1789) became the most influential literary review in Germany.

1776, one year after his arrival, Goethe arranged that Herder was called to Weimar, whom he had admired already in his Strasbourg years.

Although the vociferously unrestricted, even “organic”, works that were produced, such as Wilhelm Meister, Faust, and West-östlicher Divan, where playful and turbulent ironies abound,[8] may perceivably lend Weimar Classicism the double, ironic title “Weimar Romanticism”,[9] it must nevertheless be understood that Goethe consistently demanded this distance via irony to be imbued within a work for precipitate aesthetic affect.[10] This, similar to what Schiller wrote of Bürger's poetry, partly explains the varied nature of the works they both produced in a considerable light and how it is they can sometimes escape the most exacting of categorizations. The vast array of writings themselves, other than being solely literary pursuances or distichs, include scientific, philosophic, and aesthetic disquisitions and periodicals as well.

Primary works of the period

By Goethe and Schiller both in collaboration

See also: works by Herder, works by Goethe, and works by Schiller.

Weimar Classicism's two most notable exponents, Goethe and Schiller, especially influenced later Germans where their works have been read and studied by fellow playwrights, and also philosophers: Hegel, Schopenhauer, Nietzsche. Musicians were inspired to compose for the works of these writers: Ludwig van Beethoven, Paul Dukas, Wolfgang Amadeus Mozart, Carl Friedrich Zelter. Through the efforts of Scotsman Thomas Carlyle, who translated some of these works and wrote a biography of Schiller, they became more accessible to the English-speaking peoples in the mid-19th Century.

Some of Goethe's ideas in the Theory of Colours have impacted scientific figures such as Charles Darwin. Goethe's color spectrum is still used.