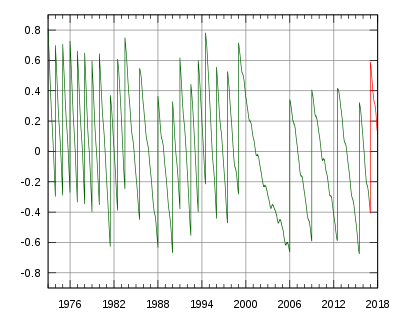 Graph showing the difference in seconds between UT1 and UTC over time. A vertical transition indicates the use of a leap second. The red portion of the graph indicates predicted values.

UTC is maintained via leap seconds, such that DUT1 remains within the range −0.9 s < DUT1 < +0.9 s. The reason for this correction is partly that the rate of rotation of the Earth is not constant, due to tidal braking and the redistribution of mass within the Earth, including its oceans and atmosphere, and partly because the SI second (as now used for UTC) was already, when adopted, a little shorter than the current value of the second of mean solar time.[1]

Forecast values of DUT1 are published by IERS Bulletin A.

Weekly updated values of DUT1 with 0.1 s precision are broadcast by several time signal services, including WWV and MSF. These services transmit one pulse per second of some sort. To represent positive DUT1 values from +0.1 to +0.8 seconds, the pulses sent during seconds 1 through 8 are "emphasized" in some way, generally by transmitting a double pulse. The number of emphasized pulses gives the value of DUT1. Negative DUT1 values, from −0.1 to −0.8 seconds, are similarly represented by emphasizing pulses 9 through 16. For example, a DUT1 value of −0.4 would be transmitted by emphasizing pulses 9 through 12.