In Horology, the study of clocks and watches, a complication refers to any feature in a timepiece beyond the simple display of hours and minutes. A timepiece indicating only hours and minutes is otherwise known as a simple movement. Common complications in commercial watches are day/date displays, alarms, chronographs, and automatic winding mechanisms.

The more complications in a watch, the more difficult it is to design, create, assemble, and repair. A typical date-display chronograph may have up to 250 parts, while a particularly complex watch may have a thousand or more parts. Watches with several complications are referred to as grandes complications.

The initial ultra-complicated watches appeared due to watchmakers' ambitious attempts to unite a great number of functions in a case of a single timepiece. The mechanical clocks with a wide range of functions, including astronomical indications, suggested ideas to the developers of the first pocket watches. As a result, as early as in the 16th century, the horology world witnessed the appearance of numerous complicated and even ultra-complicated watches. 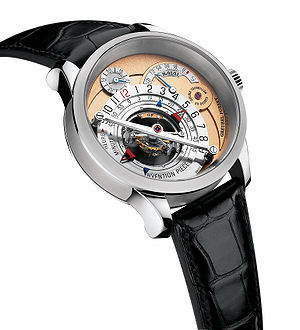 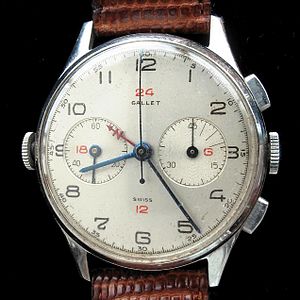 The most complicated pocket watch movements

According to watch manufacturer Patek Philippe, the three most complicated watches in the world are all pocket watches made by that company.

The Vacheron Constantin Reference 57260 is now widely regarded as the most complicated watch in the world. It is a highly complicated mechanical pocket watch, featuring 57 functions. The watch was assembled by Vacheron Constantin and introduced it in 2015. The company claims that it is the most complicated mechanical pocket watch ever created. The Reference 57260 took eight years to assemble. The watch has 2826 parts and 31 hands, weighs 957 grams, and spans 98mm.

The most complicated wristwatch movement

The Franck Muller Aeternitas Mega 4 is the world's most complicated wristwatch. It has 36 complications, 25 of them visible, 1483 components and 1000-year calendar.[8]

The Hybris Mechanica Grande Sonnerie is the world's second most complicated wristwatch. Powered by the Jaeger LeCoultre Calibre 182 movement, with 27 complications and over 1300 parts. The movement is housed in a 44mm by 15mm 18k white gold case.[9]

Examples of complications include:

Sometimes various displays in or on a watch are counted as complications even if they have nothing to do with timetelling. Often-seen examples include thermometer, barometer (rare in watches; more frequent in clocks), compass, or altimeter. Many horologists will not count nonhorological complications when adding up the number of complications on a given watch or clock, and some purists even exclude the power reserve from the complications count because it does not show a time indication (although its function is related to timekeeping).