From Infogalactic: the planetary knowledge core
Jump to: navigation, search
This article is about the tree. For other uses of the term "pine", see Pine (disambiguation).

Pines are conifer trees in the genus Pinus /ˈpiːnuːs/,[1] in the family Pinaceae. They are the only genus in the subfamily Pinoideae. The Plant List compiled by the Royal Botanic Gardens, Kew and Missouri Botanical Garden accepts 126 species names of pines as current, together with 35 unresolved species and many more synonyms.[2]

The modern English name pine derives from Latin pinus which some have traced to the Indo-European base *pīt- ‘resin’ (source of English pituitary).[3] In the past (pre-19th century) they were often known as fir, from Old Norse fura, by way of Middle English firre. The Old Norse name is still used for pines in some modern north European languages, in Danish fyr, in Norwegian fura/fure/furu, Swedish fura/furu, Dutch vuren, and Föhre in German, but in modern English, fir is now restricted to fir (Abies) and Douglas-fir (Pseudotsuga).

Pines are gymnosperms. The genus is divided into three subgenera, which can be distinguished by cone, seed, and leaf characters: 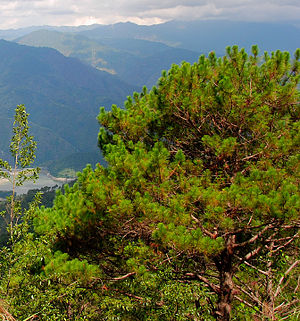 A Khasi pine in Benguet, Philippines 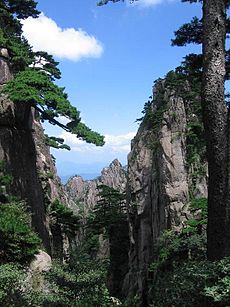 Most regions of the Northern Hemisphere (see List of pines by region) host some native species of pines. One species (Sumatran pine) crosses the equator in Sumatra to 2°S. In North America, various species occur in regions at latitudes from as far north as 66°N to as far south as 12°N.

Various species have been introduced to temperate and subtropical regions of both hemispheres, where they are grown as timber or cultivated as ornamental plants in parks and gardens. A number of such introduced species have become invasive[5] and threaten native ecosystems. 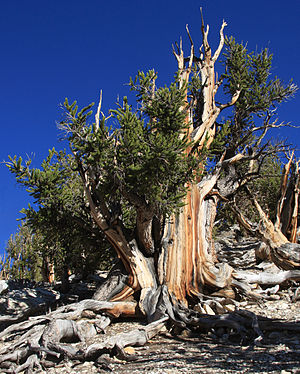 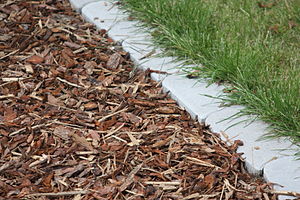 The bark of most pines is thick and scaly, but some species have thin, flaky bark. The branches are produced in regular "pseudo whorls", actually a very tight spiral but appearing like a ring of branches arising from the same point. Many pines are uninodal, producing just one such whorl of branches each year, from buds at the tip of the year's new shoot, but others are multinodal, producing two or more whorls of branches per year. The spiral growth of branches, needles, and cone scales are arranged in Fibonacci number ratios.[citation needed] The new spring shoots are sometimes called "candles"; they are covered in brown or whitish bud scales and point upward at first, then later turn green and spread outward. These "candles" offer foresters a means to evaluate fertility of the soil and vigour of the trees.

Pines are long-lived, typically reaching ages of 100–1,000 years, some even more. The longest-lived is the Great Basin bristlecone pine, Pinus longaeva. One individual of this species, dubbed "Methuselah", is one of the world's oldest living organisms at around 4,600 years old. This tree can be found in the White Mountains of California.[7] An older tree, now cut down, was dated at 4,900 years old. It was discovered in a grove beneath Wheeler Peak and it is now known as "Prometheus" after the Greek immortal.[citation needed] 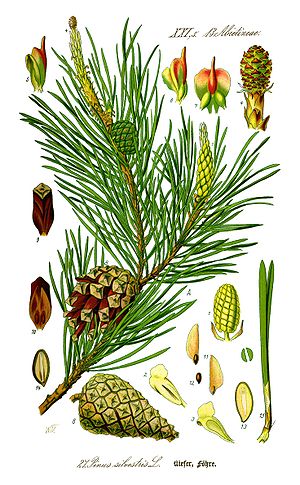 Pines have four types of leaf:

Pines are mostly monoecious, having the male and female cones on the same tree, though a few species are sub-dioecious with individuals predominantly, but not wholly, single-sex. The male cones are small, typically 1–5 cm long, and only present for a short period (usually in spring, though autumn in a few pines), falling as soon as they have shed their pollen. The female cones take 1.5–3 years (depending on species) to mature after pollination, with actual fertilization delayed one year. At maturity the female cones are 3–60 cm long. Each cone has numerous spirally arranged scales, with two seeds on each fertile scale; the scales at the base and tip of the cone are small and sterile, without seeds. The seeds are mostly small and winged, and are anemophilous (wind-dispersed), but some are larger and have only a vestigial wing, and are bird-dispersed (see below). At maturity, the cones usually open to release the seeds, but in some of the bird-dispersed species (e.g. whitebark pine), the seeds are only released by the bird breaking the cones open. In others, the seeds are stored in closed ("serotinous") cones for many years until an environmental cue triggers the cones to open, releasing the seeds. The most common form of serotiny is pyriscence, in which a resin binds the cones shut until melted by a forest fire. 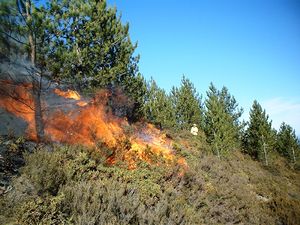 The seeds are commonly eaten by birds and squirrels. Some birds, notably the spotted nutcracker, Clark's nutcracker and Pinyon jay, are of importance in distributing pine seeds to new areas. Pine needles are sometimes eaten by some Lepidoptera (butterfly and moth) species (see list of Lepidoptera that feed on pines), the Symphytan species pine sawfly, and goats.[citation needed] 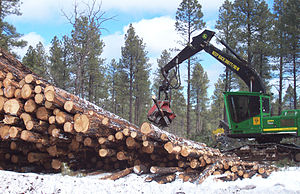 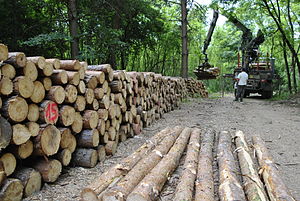 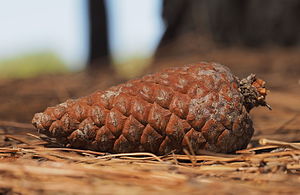 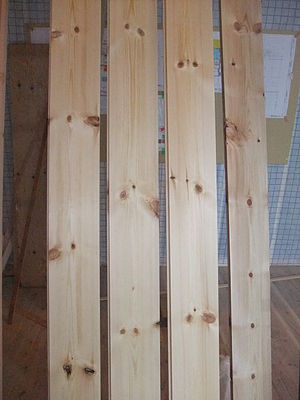 Pines are among the most commercially important tree species valued for their timber and wood pulp throughout the world. In temperate and tropical regions, they are fast-growing softwoods that will grow in relatively dense stands, their acidic decaying needles inhibiting the sprouting of competing hardwoods. Commercial pines are grown in plantations for timber that is denser, more resinous, and therefore more durable than spruce (Picea). Pine wood is widely used in high-value carpentry items such as furniture, window frames, panelling, floors and roofing, and the resin of some species is an important source of turpentine.

Many pine species make attractive ornamental plantings for parks and larger gardens with a variety of dwarf cultivars being suitable for smaller spaces. Pines are also commercially grown and harvested for Christmas trees. Pine cones, the largest and most durable of all conifer cones, are craft favorites. Pine boughs, appreciated especially in wintertime for their pleasant smell and greenery, are popularly cut for decorations. A number of species are attacked by nematodes, causing pine wilt disease, which can kill some quickly. Pine needles are also used for making decorative articles like baskets, trays, pots, etc. This Native American skill is now being replicated across the world. Pine needle handicrafts are made in the US, Canada, Mexico, Nicaragua and India. Pine needles serve as food for various Lepidoptera. See List of Lepidoptera that feed on pines.

Because pines have no insect or decay resistant qualities after logging, they are generally recommended for construction purposes as indoor use only (ex. indoor drywall framing). This wood left outside can be expected to last no more than 12–18 months depending on the local climate. It is commonly referred to by several different names which include North American timber, SPF (spruce, pine, fir) and whitewood. 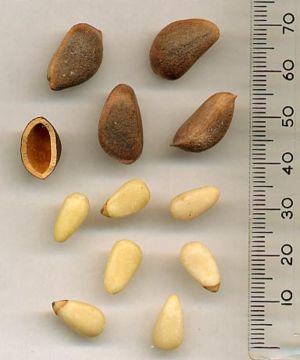 Some species have large seeds, called pine nuts, that are harvested and sold for cooking and baking. They are an essential ingredient of Pesto alla genovese.

The soft, moist, white inner bark (cambium) found clinging to the woody outer bark is edible and very high in vitamins A and C. It can be eaten raw in slices as a snack or dried and ground up into a powder for use as an ersatz flour or thickener in stews, soups, and other foods, such as bark bread. Adirondack Indians got their name from the Mohawk Indian word atirú:taks, meaning "tree eaters".

A tea made by steeping young, green pine needles in boiling water (known as "tallstrunt" in Sweden) is high in vitamins A and C.

Pine has been listed as one of the 38 substances used to prepare Bach flower remedies,[8] a kind of alternative medicine promoted[clarification needed by whom?] for its effect on health. However, according to Cancer Research UK, "there is no scientific evidence to prove that flower remedies can control, cure or prevent any type of disease, including cancer".[9]