Dmitri Shostakovich composed his Symphony No. 12 in D minor, Op. 112, subtitled The Year of 1917, in 1961, dedicating it to the memory of Vladimir Lenin, leader of the Bolshevik Revolution, as he did for his Symphony No. 2. The symphony was premiered that October by the Leningrad Philharmonic Orchestra under conductor Yevgeny Mravinsky. This was also the last Shostakovich symphony which Mravinsky premiered; his refusal to give the first performance of the Thirteenth Symphony, Babi Yar, caused a permanent strain in their working relationship.[1][2]

The symphony, scored for a medium-sized orchestra, is approximately 40 minutes long and divided into four movements:

Shostakovich had attempted, or at least announced his intent, to compose a symphony depicting Lenin as far back as the latter 1930s, elaborating on the subject in more than half a dozen interviews over a two-and-a-half-year period. He had planned this symphony as a biographical drama, tracing Lenin from his youth to the new Russian society he had created and using text by such writers as Vladimir Mayakovsky. In December 1940 Shostakovich admitted that he had overreached himself and failed to write a Lenin cantata based on Mayakovsky's text. Reports of a Lenin symphony continued well into 1941, however, dissipating only with the German invasion that May.[3]

By the summer of 1959, Shostakovich again mentioned that he was at work on a major work commemorating Lenin. "What form my idea will take, whether it will be an oratorio, a cantata, a symphony, or a symphonic poem, I don't want to predict. One thing is clear: the effort to embody the mighty image of the greatest man of our most complex epoch will demand the exertion of all creative resources."[4] Though Shostakovich expressed the desire to have this work ready for the ninetieth anniversary of Lenin's birth in April 1960, this date came and passed without its completion. Progress was slowed further when the composer fell and broke his left leg at his son Maxim's wedding in October 1960. He completed the work the following year.[5]

The Twelfth Symphony follows the model of the Eleventh Symphony in being programmatic in intent. Therefore, programmatic rather than symphonic considerations dictate its musical development, the subtitle for the symphony and movement titles commemorating the Russian Revolution. There is a difference from there as to how the music in both symphonies progresses. While the Twelfth is written like the Eleventh in four movements that proceed from one to the next without break, the Twelfth does not recapture the sense of newsreel commentary that characterized the Eleventh. Instead, the movements of the Twelfth become a series of reflections, as though one is watching a series of tableaux. (For this reason, the Twelfth was called a "folk heroic epic", as opposed to the Eleventh as a "folk music drama.")[6] The Twelfth is also unlike its other direct ancestor, the experimental Second Symphony, in being extremely traditional, with the fast opening movement laid out along academically correct lines that Myaskovsky or his teacher Glazunov would have followed.[7]

Some have commented negatively that the musical treatment in the symphony resembles an overblown film score, forgetting the work is program music above all. A further hindrance to the organic integration of the symphony is the use of revolutionary songs. While this fulfils the programmatic intent of the work, it is also non-symphonic material that does not allow the music to cohere in a traditional symphonic statement.[8] 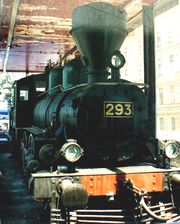 Locomotive of Lenin’s train, on which he arrived at Finland Station, Petrograd in April, 1917.

The fact some critics, especially in the West, have considered the Twelfth among the least satisfying musically of Shostakovich's symphonies cannot be attributed to a creative slump, given that he had recently written the First Cello Concerto and the Eighth String Quartet. Shostakovich had become a Party member in 1960 and may have felt compelled to write a Party line symphony, if for no reason other than to protect himself. The fact the composer would have felt compelled to do so in the midst of the Khrushchev Thaw could certainly be considered questionable, and the government at this point in his career may have found it more politic to exploit Shostakovich than to harass him.[9] Nevertheless, the fact was that the 1948 Zhdanov decree had been rescinded only in 1958, and there were also still memories of Shostakovich's 1936 denunciation.[10] Nor was the composer totally free to express what he wished, as the political controversy over his Thirteenth Symphony would soon prove. Because of these circumstances, it has been suggested by some critics that the Twelfth represents an unwelcome infiltration of officialdom into Shostakovich's main compositional oeuvre, instead of being limited to patriotic film scores and other commissioned works.[11]

It has also been surmised that the naiveté of the Twelfth's program, structure and thematic invention indicate that Shostakovich had to write the work quickly after the abandonment of an earlier, possibly rashly satirical composition.[11] The source of this story was the composer's friend Lev Lebidinsky, whom the composer contacted a few days before the work's premiere. This theory has two major challenges. First, Shostakovich had only a few days in which to rewrite a 40-minute symphony. Second, the work had already been performed before the Union of Composers on 8 September, so any substantial changes would have attracted considerable attention and comment. Although only a detailed analysis of the manuscript can confirm it, what seems more likely is that Shostakovich reconsidered his conception of the symphony radically. This would have taken place between the summer of 1960 and the summer of 1961, when he completed the work.[12]

The Twelfth Symphony was well received in the Soviet Union, though more coolly than its predecessor. While the Eleventh Symphony was received fairly warmly in the West due in part to its assumed allusion to the Hungarian uprising of 1956, the Twelfth's apparently pro-Communist subject matter led to a poor reception there.[13] Western listeners became more receptive after the Cold War but the Twelfth remains in the lower echelon of Shostakovich's symphonies due to its workmanlike nature.[14]