Beckley is a city and county seat of Raleigh County located in West Virginia, United States. It was founded on April 4, 1838.[6] Beckley was named in honor of John James Beckley, who was the first Clerk of the House of Representatives and the first Librarian of Congress. It was founded by his son Alfred Beckley (US Army general and Confederate militia commander, born in Washington, D.C.). The current mayor is Bill O'Brien [7] 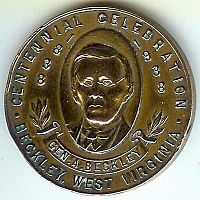 Although founded in 1838, Beckley existed only on paper at that time, "Alfred Beckley said he "was frequently jeered and laughed at for his Paper Town..."[8] Early in its history, the town was known as Beckleyville and Raleigh Court House. In 1850, "The act of creating the county (Raleigh) made the town of Beckleyville the county seat." [9] The city is sometimes called the "Smokeless Coal Capital", "The City of Champions" and the "Gateway To Southern West Virginia."[citation needed] Beckley had the first "community antenna" television system in the United States, a forerunner of cable television.[citation needed]

During the presidential primaries of 1960, the vehicles of rivals John F. Kennedy and Hubert Humphrey stopped at the same streetcorner in Beckley. Recognizing each other, the two men got out and chatted briefly.[10]

Due to its elevation, the climate of Beckley is either classified as mountain temperate or humid continental (Köppen Cfb or Dfb, respectively), and the city straddles the border between USDA Plant Hardiness Zones 6B and 7A.[12] Summers are warm and humid, usually a few degrees cooler than lower-elevation places within the state, with some days of 90 °F (32 °C)+ highs annually. Winters are generally cold and snowy with occasional intervening warm periods and some nights with a sub-10 °F (−12 °C) lows. Temperatures range from (approximate) 31.1 °F (−0.5 °C) in January to (approximate) 86.4 °F (30.2 °C) in July. Snowfall varies with an yearly average of (appromimately) 61.4 inches (156 cm) per season and mostly occurs from December to March with an occasional snowfall in November of (usually) 2–3 inches (5–8 cm).

There were 7,800 households of which 25.6% had children under the age of 18 living with them, 36.8% were married couples living together, 15.5% had a female householder with no husband present, 4.2% had a male householder with no wife present, and 43.4% were non-families. 37.5% of all households were made up of individuals and 15.4% had someone living alone who was 65 years of age or older. The average household size was 2.17 and the average family size was 2.85.

There were 7,651 households out of which 25.1% had children under the age of 18 living with them, 40.9% were married couples living together, 16.2% had a female householder with no husband present, and 40.0% were non-families. 35.6% of all households were made up of individuals and 16.5% had someone living alone who was 65 years of age or older. The average household size was 2.18 and the average family size was 2.83.

Three universities are located in Beckley: WVU Beckley, University of Charleston-Beckley and a branch campus of Concord University. Also located in Beckley is New River Community and Technical College. The nonprofit, nondenominational Appalachian Bible College[18] is located just outside the city limits, in nearby Bradley.

The city is the regional hub for over 100,000 Southern West Virginia residents. It is the eighth-largest city in West Virginia, exceeded in population by Fairmont and followed by Martinsburg. 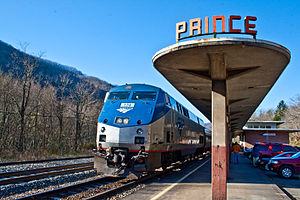 Beckley is well known for two major tourist attractions: The Beckley Exhibition Coal Mine and Tamarack. The Exhibition Coal Mine is a preserved coal mine that offers daily tours and a history lesson on coal mining in Appalachia. Tamarack, a showcase of Appalachian arts and crafts, was built in 1996 at a cost of $10 million and dedicated to former Governor Gaston Caperton.