From Infogalactic: the planetary knowledge core
Jump to: navigation, search
"First Pacific Squadron" redirects here. It is not to be confused with Pacific Squadron, Pacific Station, or Pacific Fleet.

The Pacific Fleet (Russian: Тихоокеанский флот,[1] translit: Tikhookeanskiy flot, named Red Banner Pacific Fleet, Краснознамённый Тихоокеанский флот in Soviet times) is the part of the Russian Navy that is stationed in the Pacific Ocean, which formerly secured the Far Eastern borders of the Soviet Union. The fleet headquarters is located in Vladivostok and a number of fleet bases are located in the Vladivostok area. Another important fleet base in the Russia Far East area is Petropavlovsk-Kamchatsky in Avacha Bay on the Kamchatka Peninsula, with a major submarine base located at Vilyuchinsk in the same bay.

In the Soviet years, the Pacific Fleet was also responsible for the administration and operational direction of the Soviet Navy's Indian Ocean (8th) Squadron and Soviet naval technical support points hosted by nations in the Indian Ocean rim, such as the facilities in Socotra Island.

In 1731, the Imperial Russian Navy created the Okhotsk Military Flotilla (Охотская военная флотилия, Okhotskaya voyennaya flotiliya) under its first commander, Grigoriy Skornyakov-Pisarev, to patrol and transport government goods to and from Kamchatka. In 1799, 3 frigates and 3 smaller ships were sent to Okhotsk under the command of Rear-Admiral I. Fomin to form a functioning military flotilla. In 1849, Petropavlovsk-na-Kamchatke became the Flotilla's principal base, which a year later would be transferred to Nikolayevsk-on-Amur and later to Vladivostok in 1871. In 1854, the men of the Flotilla distinguished themselves in the defense of Petropavlovsk-Kamchatskiy during the Crimean War, (1853-1856). In 1856, the Okhotsk Military Flotilla changed its name to the "Siberian Military Flotilla" (Сибирская военная флотилия, Sibirskaya voyennaya flotiliya).

In 1860, the provisions of the Convention of Peking ceded parts of Outer Manchuria in northeastern China, including the modern day Primorsky Krai to the Russian Empire. A large squadron under Rear Admiral A. A. Popov was sent from the Baltic Fleet to the Pacific Ocean. During the American Civil War ships of the squadron visited San Francisco while the Baltic Fleet visited New York City. Parts of the squadron, including the Finnish corvette Kalevala, returned to the Baltic in 1865.

At the turn of the 19th century, the Flotilla was still small in numbers. Owing to a gradual deterioration in Russo-Japanese relations, the Imperial Russian government adopted a special shipbuilding program to meet the needs of the Russian Far East region, but its execution dragged on and in addition there were several clashes and defeats between Russian and Imperial Japanese Navy vessels. In response, the Naval headquarters in St. Petersburg ordered the Baltic Fleet to the Pacific to reinforce Russian naval forces, primarily the Pacific Squadron on the east coast of Asia and its naval base at Port Arthur.

During the Russo-Japanese War, most of the Russian Navy in the Pacific was destroyed. The Russian Baltic Fleet under Admiral Zinovy Rozhestvensky, renamed the Second Pacific Squadron, was defeated at the Battle of Tsushima.

The headquarters of the Pacific Fleet in Vladivostok

During the Russian Revolution of 1905, the sailors of the Pacific Fleet were actively engaged in the revolutionary movement, participating in armed revolts in Vladivostok in January 1906 and October 1907. During the October Revolution of 1917, the sailors of the Siberian and Amur military flotillas fought for the establishment of Soviet authority in the Far East and against the White army and interventionists. During the Russian Civil War, almost all of the ships of the Pacific Fleet were seized by the White army and the Japanese. After the departure of the interventionists in 1922, the Soviets created the Naval Forces of the Far East, under commander Ivan Kozhanov, as a part of the Vladivostok unit, and the Amur Military Flotilla (Амурская военная флотилия, or Amurskaya voyennaya flotiliya). In 1926, these were disbanded: the Vladivostok unit was transferred to the command of the frontier troops in the Far East, and the Amur flotilla became a flotilla of its own.

Owing to Japanese aggression in Manchuria in 1931, the Central Committee and the Soviet government decided to create the Naval Forces in the Far East on 13 April 1932. In January 1935, they were renamed the Pacific Fleet, under commander M. Viktorov. The creation of the fleet entailed great difficulties. The first units were formed with small ships delivered by railroad. In 1932, the torpedo boat squadron and eight submarines were put into service. In 1934, the Pacific Fleet received 26 small submarines. The creation of the naval aviation and coastal artillery was underway. In 1937, they opened the Pacific Military School.

During the Great Patriotic War (the Soviet World War II campaign against Nazi Germany of 1941–45) the Pacific Fleet was in a permanent state of alert and ready for action, although the Soviets remained neutral with respect to the Empire of Japan, the only Axis power in the Pacific, even after Japan entered World War II. At the same time, the Soviets transferred 1 destroyer leader, 2 destroyers, and 5 submarines from the Pacific Fleet to the Northern Fleet (see Soviet Red Banner Northern Fleet). More than 140,000 sailors from the Pacific Fleet were incorporated in the rifle brigades and other units on the Soviet front against Germans in Europe. By August 1945, the Pacific Fleet consisted of two cruisers, one destroyer leader, ten destroyers, two torpedo boats, 19 patrol boats, 78 submarines, ten minelayers, 52 minesweepers, 49 "MO" anti-submarine boats (MO stands for Малый Охотник, or "little hunter"), 204 motor torpedo boats and 1459 war planes.

During the Soviet-Japanese War of 1945, the Pacific Fleet participated in the removal of the Empire of Japan from Northern Korea (a part of the Manchurian Operation of 1945), in the Invasion of South Sakhalin and the Kuril Islands Landing Operation the same year. 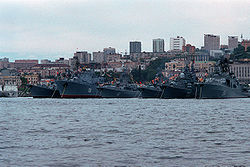 Ships of the Soviet Pacific Fleet at Vladivostok in 1990

On 5 May 1965, the Pacific Fleet itself was awarded with the Order of the Red Banner.

Following the victory of communist North Vietnam and the end of the Vietnam War in 1975, a Soviet naval material-technical support facility was established by intergovernmental agreement at Cam Ranh Bay in the south of the unified country.

The Pacific Fleet started deploying forces to the Indian Ocean, and established the 8th Operational (Indian Ocean) Squadron in 1968, after the British government announced its intention to withdraw its military forces east of the Suez Canal by 1971. In addition to the defensive function of balancing the naval strength in the Indian Ocean against that of the United States Navy, the 8th Squadron played a role in promoting Soviet foreign policy. Regular visits and port calls were made in the Indian subcontinent, the Persian Gulf, and the East African coast. After 1975, its major stronghold was Cam Ranh Bay in Vietnam.

The 8th Operational Squadron grew quite substantial at times; in 1980, a Soviet flotilla of 'about ten guided missile cruisers, destroyers and frigates and more than a dozen support ships' was juxtaposed to the U.S. Navy's Task Force 70 in the region.[2] There were also 23 other Soviet ships in the South China Sea, at the same time. In addition, Soviet IL-38 reconnaissance planes, based in Aden or Ethiopia, maintained a close watch on U.S. vessels, as did Ka-25 Hormone helicopters from Soviet warships.

In the 1980s, Soviet naval strategy shifted to an emphasis on bastion defense, fortifying the Sea of Okhotsk for that purpose.[citation needed] By the mid-1980s, the Pacific Fleet had constituted 32% of all Soviet naval assets, up from 28% in 1975 and 25% in 1965. It included approximately 800 ships, over 120 submarines, and 98 surface combatants.[3] Two of the ships were aircraft carriers Minsk and Novorossiysk, which served from the 1970s and 1980s to the 1990s. The battlecruiser Admiral Lazarev of the Kirov class served with the fleet in the 1980s and 1990s as well.

In the 1990s and 2000s, the Pacific Fleet lost many of its larger units. Within a few years after the collapse of the Soviet Union, the Fleet lost all its aircraft carriers, and by early 2000 only one cruiser remained active with the Fleet. By the end of the 2010s, the Fleet consisted of one large missile cruiser, five destroyers, ten nuclear submarines, and eight diesel-electric submarines.

Plans for deployment of new large units to the Fleet have been announced. Several new SSBN submarines, and large cruisers are to join the Fleet in the coming years.[4][5]

Between 5–12 July 2013, warships from the Russian Pacific Fleet and the North Sea Fleet of the People's Liberation Army Navy participated in Joint Sea 2013, bilateral naval maneuvers held in the Peter the Great Bay. Joint Sea 2013 was the largest naval drills yet undertaken by the PRC's navy with a foreign navy.[6]

An accident aboard Nerpa, a nuclear-powered attack submarine doing a test run during sea trials in the Sea of Japan on 8 November 2008, killed more than 20 people,[7] marking the worst submarine disaster since Kursk sank in 2000. Nerpa was an Akula-class submarine belonging to the Pacific Fleet. Its construction began in 1991, but was delayed due to lack of funding.[8]

Commanders of the Pacific Fleet

In January 1947, the Pacific Fleet was divided into the 5th and 7th fleets:

In April 1953, the Fleets were once again combined under one command:

Organization of the Pacific Fleet