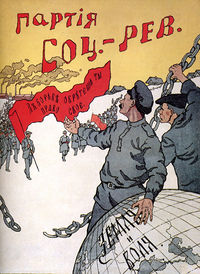 Socialist–Revolutionary election poster, 1917. The caption in red reads "партия соц-рев" (in Russian), short for Party of the Socialist Revolutionaries. The banner bears the party's motto "В борьбе обретешь ты право свое" ("Through struggle you will attain your rights"), and the globe bears the slogan "земля и воля" ("land and freedom") expressing agrarian socialist ideology of the party.

The Socialist Revolutionary Party, or Party of Socialists Revolutionaries (the SRs; Russian: Партия социалистов-революционеров (ПСР), эсеры) was a major political party in early 20th century Russia and a key player in the Russian Revolution. Its general ideology was revolutionary socialism of democratic socialist and agrarian socialist forms. After the February Revolution of 1917, it shared power with other liberal and democratic socialist forces within the Russian Provisional Government. In November 1917, it won a plurality of the national vote in Russia's first-ever democratic elections (to the Russian Constituent Assembly), but the October Revolution had changed the political landscape and the Bolsheviks disbanded the Constituent Assembly in January 1918.[1] The SRs soon split into pro-Bolshevik and anti-Bolshevik factions. The anti-Bolshevik faction of this party, known as the Right SRs, which remained loyal to the Provisional Government leader Alexander Kerensky was defeated and destroyed by the Bolsheviks in the course of the Russian Civil War and subsequent persecution.

Prior to the Russian Revolution

The party's ideology was built upon the philosophical foundation of Russia's narodnik–Populist movement of the 1860s-70s and its worldview developed primarily by Alexander Herzen and Pyotr Lavrov. After a period of decline and marginalization in the 1880s, the Populist/narodnik school of thought about social change in Russia was revived and substantially modified by a group of writers and activists known as "neonarodniki" (neo-Populists), particularly Viktor Chernov. Their main innovation was a renewed dialogue with Marxism and integration of some of the key Marxist concepts into their thinking and practice. In this way, with the economic spurt and industrialization in Russia in the 1890s, they attempted to broaden their appeal in order to attract the rapidly growing urban workforce to their traditionally peasant-oriented programme. The intention was to widen the concept of the 'people' so that it encompassed all elements in society that opposed the Tsarist regime.

The party's program was democratic socialist and agrarian socialist; it garnered much support among Russia's rural peasantry, who in particular supported their program of land-socialization as opposed to the Bolshevik programme of land-nationalisation—division of land to peasant tenants rather than collectivization in state management. The party's policy platform differed from that of the Russian Social Democratic Labour Parties — both Bolshevik and Menshevik — in that it was not officially Marxist (though some of its ideologues considered themselves such); the SRs believed that the 'labouring peasantry', as well as the industrial proletariat, would be the revolutionary class in Russia. Whereas Russian SDs defined class membership in terms of ownership of the means of production, Chernov and other SR theorists defined class membership in terms of extraction of surplus value from labour. On the first definition, small-holding subsistence farmers who do not employ wage labour are, as owners of their land, members of the petty bourgeoisie; on the second definition, they can be grouped with all who provide, rather than purchase, labour-power, and hence with the proletariat as part of the 'labouring class'. Nevertheless, Chernov considered the proletariat as 'vanguard', and the peasantry as the 'main body' of the revolutionary army.[2] 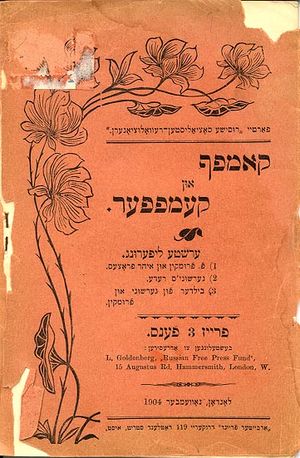 The party played an active role in the Revolution of 1905, and in the Moscow and St. Petersburg Soviets. Although the party officially boycotted the first State Duma in 1906, 34 SRs were elected, while 37 were elected to the second Duma in 1907; the party boycotted both the third and fourth Dumas in 1907–1917. In this period, party membership drastically declined, and most of its leaders emigrated from Russia.

A distinctive feature of party tactics until about 1909 was its heavy reliance on assassinations of individual government officials. These tactics were inherited from SRs' predecessor in the Populist movement, People's Will, a conspiratorial organization of the 1880s. They were intended to embolden the "masses" and intimidate ("terrorize") the Tsarist government into political concessions. The SR Combat Organization, responsible for assassinating government officials, was initially led by Gershuni and operated separately from the party so as not to jeopardize its political actions. SRCO agents assassinated two Ministers of the Interior, Dmitry Sipyagin and V. K. von Plehve, Grand Duke Sergei Aleksandrovich, the Governor of Ufa N. M. Bogdanovich, and many other high-ranking officials.

In 1903, Gershuni was betrayed by his deputy, Yevno Azef, an agent of the Okhrana secret police, arrested, convicted of terrorism and sentenced to life at hard labor, managing to escape, flee overseas and go into exile. Azef became the new leader of the SRCO, and continued working for both the SRCO and the Okhrana, simultaneously orchestrating terrorist acts and betraying his comrades. Boris Savinkov ran many of the actual operations, notably the assassination attempt on Admiral Fyodor Dubasov.

Terrorism was controversial for the party from the beginning, however. At its Second Congress in Imatra in 1906, the controversy over terrorism was one of the main reasons for the defection of the SR Maximalists on the left and the Popular Socialists on the right. The Maximalists endorsed not only attacks on political and government targets but also 'economic terror' (i.e., attacks on landowners, factory owners etc.); the Popular Socialists rejected all terrorism. Other issues also divided the defectors from the PSR: Maximalists disagreed with the SRs' strategy of a 'two-stage' revolution as advocated by Chernov, the first stage being 'popular-democratic' and the second 'labour-socialist'. To Maximalists, this seemed like the Social-Democrats' distinction between 'bourgeois-democratic' and 'proletarian-socialist' stages of revolution. Maximalism stood for immediate socialist revolution. Meanwhile, the Popular Socialists disagreed with the party's proposal to 'socialise' the land (i.e., turn it over to collective peasant ownership) and instead wanted to 'nationalise' it (i.e., turn it over to the state; they also wanted landowners to be compensated, while the PSR rejected indemnities).

In late 1908, a Russian narodnik and amateur spy hunter Vladimir Burtsev suggested that Azef might be a police spy. The party's Central Committee was outraged and set up a tribunal to try Burtsev for slander. At the trial, Azef was confronted with evidence and was caught lying, he fled and left the party in disarray. The party's Central Committee, most of whose members had close ties to Azef, felt obliged to resign. Many regional organizations, already weakened by the revolution's defeat in 1907, collapsed or became inactive. Savinkov's attempt to rebuild the SRCO failed and it was suspended in 1911. Ironically, Gershuni had defended Azef from exile in Zurich until his death there.

The Azef scandal contributed to a profound revision of SR tactics that was already underway. As a result, it renounced assassinations ("individual terror") as a means of political protest.

With the start of World War I, the party was divided on the issue of Russia's participation in the war. Most SR activists and leaders, particularly those remaining in Russia, chose to support the Tsarist government mobilization against Germany. Together with the like-minded members of the Menshevik party, they became known as oborontsy ("defensists"). Many younger defensists living in exile joined the French army as Russia's closest ally in the war. A smaller group, the internationalists, which included Chernov, favored the pursuit of peace through cooperation with socialist parties in both military blocs. This led them to participate in the Zimmerwald and Kienthal conferences with Bolshevik emigres led by Lenin. This fact was later used against Chernov and his followers by their right-wing opponents as alleged evidence of their lack of patriotism and Bolshevik sympathies.

The February Revolution allowed the SRs to return to an active political role. Party leaders, including Chernov, returned to Russia. They played a major role in the formation and leadership of the Soviets, albeit in most cases playing second fiddle to the Mensheviks. One member, Alexander Kerensky, joined the Provisional Government in March 1917 as Minister of Justice, eventually becoming the head of a coalition socialist-liberal government in July 1917, although his connection with the party was tenuous. (He had served in the Duma with the Trudoviks, breakaway SRs that defied the party's refusal to participate in the Duma.)

After the fall of the first coalition in April–May 1917 and the reshuffling of the Provisional Government, the party played a larger role. Its key government official at the time was Chernov who joined the government as Minister of Agriculture. He also tried to play a larger role, particularly in foreign affairs, but soon found himself marginalized and his proposals of far-reaching agrarian reform blocked by more conservative members of the government. After the failed Bolshevik uprising of July 1917, Chernov found himself on the defensive as allegedly soft on the Bolsheviks and was excluded from the revamped coalition in August 1917. The party was now represented in the government by Nikolai Avksentyev, a right-wing defensist, as Minister of the Interior.

This weakening of the party's position intensified the growing divide within it between supporters of the coalition with the Mensheviks and those inclined toward more resolute, unilateral action. In August 1917, Maria Spiridonova, leader of the Left SRs, advocated scuttling the coalition and forming an SR-only government, but was not supported by Chernov and his followers. This spurred the formation of the left-wing faction and its growing support for cooperation with the Bolsheviks. The Left SRs believed that Russia should withdraw immediately from World War I, and they were frustrated that the Provisional Government wanted to postpone addressing the land question until after the convocation of the Russian Constituent Assembly instead of immediately confiscating the land from the landowners and redistributing it to the peasants.

After the October Revolution

In the election to the Russian Constituent Assembly held two weeks after the Bolsheviks took power, the party still proved to be by far the most popular party across the country, gaining 40% of the popular vote as opposed to the Bolsheviks' 25%.[4] However, in January 1918 the Bolsheviks disbanded the Assembly and after that the SR became of less political significance.[5] The Left SRs became the coalition partner of the Bolsheviks in the Soviet government, although they resigned their positions after the Treaty of Brest-Litovsk. A few Left SRs like Yakov Grigorevich Blumkin joined the Communist Party.

Dissatisfied with the Treaty of Brest-Litovsk, two Chekists who were left SRs assassinated the German ambassador to Russia, Count Wilhelm Mirbach early in the afternoon on July 6.[6] Following the assassination, on July 6-7, 1918, the left SRs attempted a "Third Russian Revolution" against the Bolsheviks, which failed, leading to the arrest, imprisonment, exile, and execution of party leaders and members. In response, some SRs turned again to violence. A former SR, Fanny Kaplan, tried to assassinate Lenin on August 30, 1918. Many SRs fought for the Whites or Greens in the Russian Civil War alongside some Mensheviks and other banned moderate socialist elements. The Tambov Rebellion against the Bolsheviks was led by an SR, Aleksandr Antonov. However, after Admiral Kolchak was installed as "Supreme Leader," of the White Movement in November 1918, he expelled all Marxists from the ranks. As a result, many SRs placed their organization behind White lines at the service of the Red Guards and the CHEKA. Later, many Left SRs became Communists.

Following Lenin's instructions, a show trial of SRs was held in Moscow in 1922, which led to protests by, among others, Eugene Debs, Karl Kautsky, and Albert Einstein. Most of the defendants were found guilty, but did not plead guilty, unlike the defendants in the later show trials in the Soviet Union in the late 1920s and the 1930s.[7]

The party continued its activities in exile. A Foreign Delegation of the Central Committee was established, based in Prague. The party was a member of the Labour and Socialist International between 1923 and 1940.[8]