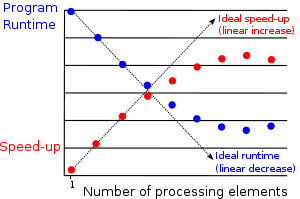 A diagram of the program runtime (shown in blue) and program speed-up (shown in red) of a real-world program with sub-optimal parallelization. The dashed lines indicate optimal parallelization–linear increase in speedup and linear decrease in program runtime. Note that eventually the runtime actually increases with more processors (and the speed-up likewise decreases). This is parallel slowdown.

Parallel slowdown is a phenomenon in parallel computing where parallelization of a parallel algorithm beyond a certain point causes the program to run slower (take more time to run to completion).

Parallel slowdown occurs when the algorithm requires significant communication, particularly of intermediate results. Some problems, known as embarrassingly parallel problems, do not require such communication, and thus are not affected by slowdown.