A goal and challenge pursued by some computer scientists and practitioners in distributed systems is location transparency; however, this goal has fallen out of favour in industry, as distributed systems are different from conventional non-distributed systems, and the differences, such as network partitions, partial system failures, and partial upgrades, cannot simply be "papered over" by attempts at "transparency" (see CAP theorem).

The word distributed in terms such as "distributed system", "distributed programming", and "distributed algorithm" originally referred to computer networks where individual computers were physically distributed within some geographical area.[5] The terms are nowadays used in a much wider sense, even referring to autonomous processes that run on the same physical computer and interact with each other by message passing.[4] While there is no single definition of a distributed system,[6] the following defining properties are commonly used:

In this article, the computational entities are called computers or nodes.

A distributed system may have a common goal, such as solving a large computational problem.[9] Alternatively, each computer may have its own user with individual needs, and the purpose of the distributed system is to coordinate the use of shared resources or provide communication services to the users.[10]

Other typical properties of distributed systems include the following: 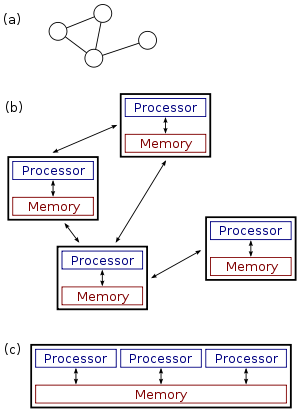 The figure on the right illustrates the difference between distributed and parallel systems. Figure (a) is a schematic view of a typical distributed system; as usual, the system is represented as a network topology in which each node is a computer and each line connecting the nodes is a communication link. Figure (b) shows the same distributed system in more detail: each computer has its own local memory, and information can be exchanged only by passing messages from one node to another by using the available communication links. Figure (c) shows a parallel system in which each processor has a direct access to a shared memory.

The use of concurrent processes that communicate by message-passing has its roots in operating system architectures studied in the 1960s.[19] The first widespread distributed systems were local-area networks such as Ethernet, which was invented in the 1970s.[20]

ARPANET, the predecessor of the Internet, was introduced in the late 1960s, and ARPANET e-mail was invented in the early 1970s. E-mail became the most successful application of ARPANET,[21] and it is probably the earliest example of a large-scale distributed application. In addition to ARPANET, and its successor, the Internet, other early worldwide computer networks included Usenet and FidoNet from the 1980s, both of which were used to support distributed discussion systems.

Various hardware and software architectures are used for distributed computing. At a lower level, it is necessary to interconnect multiple CPUs with some sort of network, regardless of whether that network is printed onto a circuit board or made up of loosely coupled devices and cables. At a higher level, it is necessary to interconnect processes running on those CPUs with some sort of communication system.

Another basic aspect of distributed computing architecture is the method of communicating and coordinating work among concurrent processes. Through various message passing protocols, processes may communicate directly with one another, typically in a master/slave relationship. Alternatively, a "database-centric" architecture can enable distributed computing to be done without any form of direct inter-process communication, by utilizing a shared database.[22]

Ghaemi et al. define a distributed query as a query "that selects data from databases located at multiple sites in a network" and offer as an SQL example:

Many tasks that we would like to automate by using a computer are of question–answer type: we would like to ask a question and the computer should produce an answer. In theoretical computer science, such tasks are called computational problems. Formally, a computational problem consists of instances together with a solution for each instance. Instances are questions that we can ask, and solutions are desired answers to these questions.

Theoretical computer science seeks to understand which computational problems can be solved by using a computer (computability theory) and how efficiently (computational complexity theory). Traditionally, it is said that a problem can be solved by using a computer if we can design an algorithm that produces a correct solution for any given instance. Such an algorithm can be implemented as a computer program that runs on a general-purpose computer: the program reads a problem instance from input, performs some computation, and produces the solution as output. Formalisms such as random access machines or universal Turing machines can be used as abstract models of a sequential general-purpose computer executing such an algorithm.

The field of concurrent and distributed computing studies similar questions in the case of either multiple computers, or a computer that executes a network of interacting processes: which computational problems can be solved in such a network and how efficiently? However, it is not at all obvious what is meant by “solving a problem” in the case of a concurrent or distributed system: for example, what is the task of the algorithm designer, and what is the concurrent or distributed equivalent of a sequential general-purpose computer?

The discussion below focuses on the case of multiple computers, although many of the issues are the same for concurrent processes running on a single computer.

In the case of distributed algorithms, computational problems are typically related to graphs. Often the graph that describes the structure of the computer network is the problem instance. This is illustrated in the following example.

Consider the computational problem of finding a coloring of a given graph G. Different fields might take the following approaches:

In parallel algorithms, yet another resource in addition to time and space is the number of computers. Indeed, often there is a trade-off between the running time and the number of computers: the problem can be solved faster if there are more computers running in parallel (see speedup). If a decision problem can be solved in polylogarithmic time by using a polynomial number of processors, then the problem is said to be in the class NC.[32] The class NC can be defined equally well by using the PRAM formalism or Boolean circuits—PRAM machines can simulate Boolean circuits efficiently and vice versa.[33]

In the analysis of distributed algorithms, more attention is usually paid on communication operations than computational steps. Perhaps the simplest model of distributed computing is a synchronous system where all nodes operate in a lockstep fashion. During each communication round, all nodes in parallel (1) receive the latest messages from their neighbours, (2) perform arbitrary local computation, and (3) send new messages to their neighbours. In such systems, a central complexity measure is the number of synchronous communication rounds required to complete the task.[34]

This complexity measure is closely related to the diameter of the network. Let D be the diameter of the network. On the one hand, any computable problem can be solved trivially in a synchronous distributed system in approximately 2D communication rounds: simply gather all information in one location (D rounds), solve the problem, and inform each node about the solution (D rounds).

On the other hand, if the running time of the algorithm is much smaller than D communication rounds, then the nodes in the network must produce their output without having the possibility to obtain information about distant parts of the network. In other words, the nodes must make globally consistent decisions based on information that is available in their local neighbourhood. Many distributed algorithms are known with the running time much smaller than D rounds, and understanding which problems can be solved by such algorithms is one of the central research questions of the field.[35]

Other commonly used measures are the total number of bits transmitted in the network (cf. communication complexity).

Traditional computational problems take the perspective that we ask a question, a computer (or a distributed system) processes the question for a while, and then produces an answer and stops. However, there are also problems where we do not want the system to ever stop. Examples of such problems include the dining philosophers problem and other similar mutual exclusion problems. In these problems, the distributed system is supposed to continuously coordinate the use of shared resources so that no conflicts or deadlocks occur.

There are also fundamental challenges that are unique to distributed computing. The first example is challenges that are related to fault-tolerance. Examples of related problems include consensus problems,[36] Byzantine fault tolerance,[37] and self-stabilisation.[38]

A lot of research is also focused on understanding the asynchronous nature of distributed systems:

The halting problem is an analogous example from the field of centralised computation: we are given a computer program and the task is to decide whether it halts or runs forever. The halting problem is undecidable in the general case, and naturally understanding the behaviour of a computer network is at least as hard as understanding the behaviour of one computer.

However, there are many interesting special cases that are decidable. In particular, it is possible to reason about the behaviour of a network of finite-state machines. One example is telling whether a given network of interacting (asynchronous and non-deterministic) finite-state machines can reach a deadlock. This problem is PSPACE-complete,[42] i.e., it is decidable, but it is not likely that there is an efficient (centralised, parallel or distributed) algorithm that solves the problem in the case of large networks.

Coordinator election (sometimes called leader election) is the process of designating a single process as the organizer of some task distributed among several computers (nodes). Before the task is begun, all network nodes are either unaware which node will serve as the "coordinator" (or leader) of the task, or unable to communicate with the current coordinator. After a coordinator election algorithm has been run, however, each node throughout the network recognizes a particular, unique node as the task coordinator.

The network nodes communicate among themselves in order to decide which of them will get into the "coordinator" state. For that, they need some method in order to break the symmetry among them. For example, if each node has unique and comparable identities, then the nodes can compare their identities, and decide that the node with the highest identity is the coordinator.

The definition of this problem is often attributed to LeLann, who formalized it as a method to create a new token in a token ring network in which the token has been lost.

Coordinator election algorithms are designed to be economical in terms of total bytes transmitted, and time. The algorithm suggested by Gallager, Humblet, and Spira [43] for general undirected graphs has had a strong impact on the design of distributed algorithms in general, and won the Dijkstra Prize for an influential paper in distributed computing.

Many other algorithms were suggested for different kind of network graphs, such as undirected rings, unidirectional rings, complete graphs, grids, directed Euler graphs, and others. A general method that decouples the issue of the graph family from the design of the coordinator election algorithm was suggested by Korach, Kutten, and Moran.[44]

When using the Bully algorithm, any process sends a message to the current coordinator. If there is no response within a given time limit, the process tries to elect itself as leader.

The Chang and Roberts algorithm (or "Ring Algorithm") is a ring-based election algorithm used to find a process with the largest unique identification number.