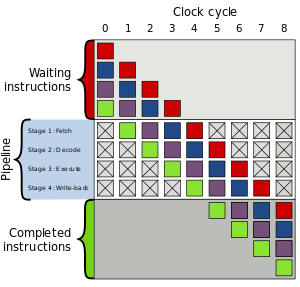 Generic 4-stage pipeline; the colored boxes represent instructions independent of each other

(Not to be confused with multiple instruction set computer, also abbreviated MISC, such as the HLH Orion or the OROCHI VLIW processor.)

Minimal Instruction Set Computer (MISC) is a processor architecture with a very small number of basic operations and corresponding opcodes. Such instruction sets are commonly stack-based rather than register-based to reduce the size of operand specifiers.

Such a stack machine architecture is inherently simpler since all instructions operate on the top-most stack entries.

As a result of the stack architecture is an overall smaller instruction set, a smaller and faster instruction decode unit with overall faster operation of individual instructions.

Also, the instruction pipelines of MISC as a rule tend to be very simple. Instruction pipelines, branch prediction, out-of-order execution, register renaming and speculative execution broadly exclude a CPU from being classified as a MISC architecture system.

Some of the first digital computers implemented with instruction sets were by modern definition Minimal Instruction Set computers.

Among these various computers, only ILLIAC and ORDVAC had compatible instruction sets.

The disadvantage of an MISC is that instructions tend to have more sequential dependencies, reducing overall instruction-level parallelism.

MISC architectures have much in common with the Forth programming language and the Java Virtual Machine that are weak in providing full instruction-level parallelism.

Probably the most commercially successful MISC was the original INMOS transputer archecture that had no floating-point unit. However, many eight-bit microcontrollers (for embedded computer applications) fit into this category.