From Infogalactic: the planetary knowledge core
Jump to: navigation, search
For the company, see Salzgitter AG.

listen))[2][3] is an independent city in southeast Lower Saxony, Germany, located between Hildesheim and Braunschweig. Together with Wolfsburg and Braunschweig, Salzgitter is one of the seven Oberzentren of Lower Saxony (roughly equivalent to a metropolitan area). With 109,142 inhabitants and 223.94 square kilometres (86.46 sq mi) (as of 30 January 2004), its area is the largest in Lower Saxony and one of the largest in Germany. Salzgitter originated as a conglomeration of several small towns and villages, and is today made up of 31 boroughs, which are relatively compact conurbations with wide stretches of open country between them. The main shopping street of the young city is in the borough of Lebenstedt, and the central business district is in the borough of Salzgitter-Bad. The city is connected to the Mittellandkanal and the Elbe-Seitenkanal by a distributary. The nearest metropolises are Braunschweig, about 23 kilometres (14 miles) to the northeast, and Hanover, about 51 km (32 miles) to the northwest. The population of the City of Salzgitter has exceeded 100,000 inhabitants since its foundation in 1942 (which made it a city (Großstadt) in contrast to a town (Stadt) by the German definition), when it was still called Watenstedt-Salzgitter. Beside Wolfsburg, Leverkusen and Eisenhüttenstadt, Salzgitter is therefore one of the few cities in Germany founded during the 20th century.

History of the name

Salzgitter is located in a bride dell coated with loess, between the Oderwald Forest and the Salzgitter-Höhenzug ("Salzgitter Hills"). The city stretches up to 24 km (15 mi) from north to south and up to 19 km (12 mi) from east to west. The highest point is the hill Hamberg (275 m or 902 ft), located northwest of Salzgitter-Bad.

The following cities, towns and municipalities, listed clockwise beginning in the northeast, border on the city of Salzgitter. (As Salzgitter was founded on the area of the district of Wolfenbüttel, that district borders on Salzgitter in the west and in the east and is therefore listed twice.) 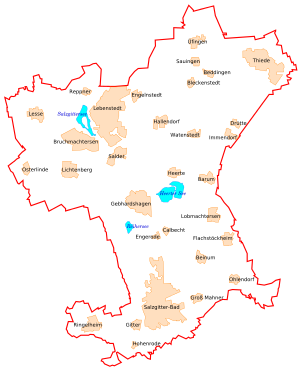 Salzgitter and its 31 boroughs

These 31 boroughs are combined to 7 towns (German: Ortschaften). Each town has an elected mayor and town council.

The towns with their boroughs are:

Salzgitter originated in the beginning of the 14th century around salt springs near the village Verpstedt (later Vöppstedt). The name was derived from the neighbouring village Gitter (nowadays a city borough) as "up dem solte to Gytere", which means "salt near Gitter"; the first mention was in 1347. After 200 years of salt production at various springs, the peasants in the area which is nowadays Salzgitter were chartered around 1350, but lost municipal law again when being transferred to the Duchy of Brunswick-Lüneburg in the beginning of the 16th century. Later, Salzgitter belonged to the diocese of Hildesheim. When the diocese was transferred to Prussia in 1803, the municipal law was reconfirmed, but taken away once more in 1815, when Salzgitter became part of the Kingdom of Hanover. In 1830, a brine bath was established in Salzgitter.

After the Kingdom of Hanover was transferred to Prussia in 1866, Salzgitter became a Prussian municipality, which was chartered again in 1929. Prior to that, the towns Vorsalz and Liebenhall had been incorporated (in 1926 and 1928, respectively). Salzgitter now belonged to the Landkreis (district) of Goslar and included, apart from Salzgitter itself, also some small settlements like Gittertor, which is nowadays part of Salzgitter-Bad. In 1936, Kniestedt was incorporated; it is also part of Salzgitter-Bad now. 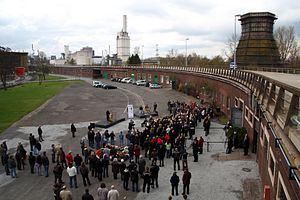 Due to the large iron ore body in Salzgitter, which had been mentioned first in 1310, the National Socialists founded the "Reichswerke Hermann Göring" for ore mining and iron production in 1937. In order to facilitate an unobstructed development of the smelting works, a unique administration structure in the whole area was conceived. Therefore, it was decreed in the Order about the area settlement around the Hermann-Göring-Werke Salzgitter, effective from 1 April 1942, to form a unified city district (independent city). Towards this aim, the town of Salzgitter and the municipalities Beinum, Flachstöckheim, Groß-Mahner, Hohenrode, Ohlendorf and Ringelheim (7 in total, all belonging to the Landkreis Goslar) and Barum, Beddingen, Bleckenstedt, Bruchmachtersen, Calbecht, Drütte, Engelnstedt, Engerode, Gebhardshagen, Hallendorf, Heerte, Immendorf, Lebenstedt, Lesse, Lichtenberg, Lobmachtersen, Osterlinde, Reppner, Salder, Thiede-Steterburg (nowadays simply Thiede) and Watenstedt (21 in total, all belonging to the Landkreis Wolfenbüttel) were merged to form the Stadtkreis Watenstedt-Salzgitter. As the neighbouring municipality Gitter had already been incorporated in 1938, the young city initially comprised 29 boroughs in 1942. Together with the remainder of the district of Goslar, the new independent municipality was integrated into the Free State of Brunswick. In return, Braunschweig transferred the Landkreis Holzminden to the Prussian Province of Hanover. In October, 1942, the SS established the Drütte concentration camp, a subcamp of the Neuengamme concentration camp, to provide slave labour for the Hermann Göring Works.[4] This large subcamp held 2,800 inmates. There were three concentration camps located in Salzgitter. During the war, Salzgitter was severely damaged by several American and British bombings. After the war, the State of Braunschweig became part of the Land Lower Saxony, and Watenstedt-Salzgitter became an Independent City in the "Administrative District of Braunschweig" (later Regierungsbezirk Braunschweig).

Georg mine in Salzgitter in 1961

In 1951, the city was renamed to "Stadt Salzgitter" (City of Salzgitter), while the borough Salzgitter was renamed to "Salzgitter-Bad", referring to the brine bath there. In the course of the local administrative reform of Lower-Saxony effective from 1 March 1974, the municipalities Üfingen and Sauingen (formerly Landkreis Wolfenbüttel) were incorporated, increasing the number of boroughs to 31. Iron ore continued to be mined in Salzgitter until 1982; in the former mine Schacht Konrad (Konrad mine), an ultimate disposal place for radioactive waste has been planned since 1975.

Population figures in order to the then area, i.e. until 1942 the contemporary quarter Salzgitter-Bad and from 1942 on the Independent City Watenstedt-Salzgitter and Salzgitter respectively.

The Catholics, who moved into the city again afterwards, belonged – like before the Reformation – to the diocese of Hildesheim, which established a separate deanery in Salzgitter, to which all parishes of the city belong nowadays.

Beside the two big churches, there are parishes, too, that belong to free churches, for example a Baptist parish, the Church of God, the Plymouth Brethren and the Seventh-day Adventist Church. In addition, there are several New Apostolic Churches in Salzgitter. Due to the immigration of foreign workers during the 1970s, there are some Islamic mosques.

After the creation of Salzgitter a state commissar was set in place as provisional Mayer of the city of Watenstedt-Salzgitter. After World War II, the military government of the British zone of occupation installed the communal constitution of Britain. Furthermore, there is an elected Council in place. The Council elects one of its members to Mayor (German: Oberbürgermeister) as leader and representative of the city. Besides, since 1946 on there was the Oberstadtdirektor as the Chief Executive of the City Council. Since 2001, the office of the leader of the Council and the Chief Executive are merged into one, simply called Mayor. Being elected by the people, he represents the city and leads the Council.

Salzgitter's Coat of Arms consists of a silver furnace visible behind a silver pinnacle wall on which there is a buckler whose upper ground is green and adorned with two saltern instruments and whose lower ground is gold and adorned with a black sledge and black iron. On the red ground behind the furnace, there are two wheaten ears.

The Coat of Arms stands for the agriculture, which is important for many villages of Salzgitter, on the one hand, and for the industry, which led to Salzgitter's foundation, on the other hand.

Like many German cities, Salzgitter has used the city's logo for some years. It is a green field with a white snaking way that narrows towards the horizon.

The City of Salzgitter is twinned to these cities and towns:

There are three bus companies in Salzgitter. The bus network is quite important considering Salzgitter consists of many spread-out villages. 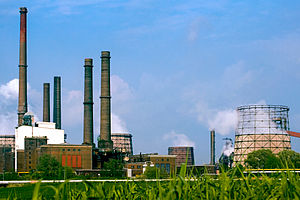 Salzgitter is seat of these public institutions:

Since 1993, there is a site of the Fachhochschule Braunschweig-Wolfenbüttel, where you can study

In addition, you can study after having completed a study in the past

and – by correspondence course –

The other sites of the Fachhochschule are Braunschweig, Wolfenbüttel and Wolfsburg.

Furthermore, there are several general-education schools (meaning that general knowledge is taught there in contrast to occupation-specific knowledge) and vocational schools, among them three grammar schools, the Gymnasium Salzgitter-Bad, the Gymnasium am Fredenberg and the Kranich-Gymnasium, the latter two located at Salzgitter-Lebenstedt.

There is no theatre in Salzgitter nor any building used as one. Yet there are several representations at various places. For example, in Salzgitter-Bad there is a society rooting in the students' theater of the local grammar-school that supports the amateur play. They act on various stages, with an auditory between 100 and 600 people. Furthermore, there are irregular performances of musicals. 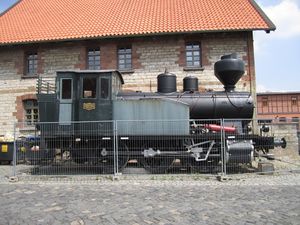 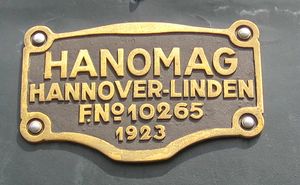 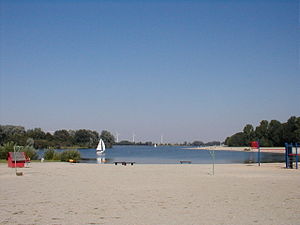