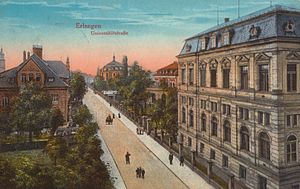 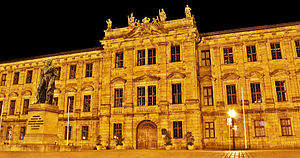 listen); East Franconian: Erlang) is a Middle Franconian city in Bavaria, Germany. It is located north-west of Nuremberg at the confluence of the river Regnitz and its large tributary, the Untere Schwabach. Erlangen has more than 100,000 inhabitants.

As of 2015[update] Erlangen is dominated by the University of Erlangen-Nuremberg and the numerous branch offices of Siemens AG, as well as a large research Institute of the Fraunhofer Society and the Max Planck Institute for the Science of Light. An event that left its mark on the city was the settlement of Huguenots after the revocation of the Edict of Nantes in 1685.

Felix Klein's Erlangen program of 1872, considering the future of research in mathematics, is so called because Klein then taught at the University of Erlangen-Nuremberg.

Erlangen was first mentioned in official records in 1002 under the name of Villa Erlangon. In 1361, the village was sold to Emperor Karl IV. Three years later, a city was built close to the village, which in 1374 got its own coining station (mint). In 1398, the municipal rights were confirmed. In 1402, the city came into the possession of the House of Hohenzollern as part of the principality of Brandenburg-Kulmbach (from 1603 on Brandenburg-Bayreuth), remaining under their rule until 1806. During the four year Napoleonic occupation, Erlangen was the capital of the so-called "Low County" (Unterland) of the principality, encompassing the area until Neustadt an der Aisch and separated from the "High County" (Oberland) by a land corridor. In 1810 it became part of the Kingdom of Bavaria, together with the rest of former Brandenburg-Bayreuth.

While it was still part of Brandenburg-Bayreuth, the first French Huguenot refugees arrived in Erlangen in 1686. Christian Ernst, Margrave of Brandenburg-Bayreuth, built a "new town" (Neustadt) for them. In 1706, the old town (just below the site of the annual Bergkirchweih) was almost completely destroyed by a fire, but soon rebuilt. In 1812, the old and new towns were merged into one.

In 1742, Frederick, Margrave of Brandenburg-Bayreuth, founded a university for his royal seat of Bayreuth, but due to the rebelliousness of the local students, the university was transferred to Erlangen. Only later did it obtain the name of "Friedrich-Alexander-University" and become a Prussian state university. Famous students of these times were Johann Ludwig Tieck and Wilhelm Heinrich Wackenroder and Emmy Noether.

The Bergkirchweih is an annual beer festival, similar to the Oktoberfest in Munich but smaller in scale. It takes place during the twelve days before and after Pentecost (that is, 49 days after Easter); this period is called the "fifth season" by the locals. The beer is served at wooden tables in one-litre stoneware jugs under the trees of the "Berg", a small, craggy, and wooded hill with old caves (beer cellars) owned by local breweries. The cellars extend for 21 km (14 miles)[2] throughout the hill (the "Berg") and maintain a constant cool underground temperature. Until Carl von Linde invented the electric refrigerator in 1871, this was considered to be the largest refrigerator in Southern Germany.[3]

It is commonly known by local residents as the "Berchkärwa" (pronounced "bairch'-care-va") or simply the "Berch", like in "Gehma auf'n Berch!" ("Let's go up the mountain!").

This is an outdoor event frequented and enjoyed by Franconians. Despite a relatively high number of visitors, it is not commonly known by tourists, or people living outside Bavaria.

Erlangen is twinned with several cities:

Though a small village for much of its history and now only a small city of only 100k inhabitants, Erlangen has made significant contributions to the world, primarily through its many Lutheran theologians, to its University of Erlangen-Nuremberg scholars, and the Siemens AG pioneers in science and technology.

Among its noted residents are;

For a more complete list, please check out Category:People from Erlangen