From Infogalactic: the planetary knowledge core
Jump to: navigation, search
For other uses, see Ufa (disambiguation).

pronunciation (help·info)) is the capital city of the Republic of Bashkortostan, Russia, and the industrial, economic, scientific and cultural center of the republic. Population: 1,105,667[13] (2015).

File:Atlas Cosmographicae (Mercator) 035.jpg
Gerardus Mercator's map of Europe with Pascherti (Bashkort) settlement presumably in the position of modern Ufa.[14] Map was compiled in 1554, twenty years before the official date of the foundation of Ufa.

Early history of the surrounding area of Ufa out in Paleolithic times.[15]

Presumably in the 5th to the 16th centuries on the site of Ufa there was a medieval city.[16] On the map of Pizzigano brothers (1367)[17] and on the Catalan Atlas (1375)[18] approximately on the Belaya River was designated a town Pascherti (Bashkort),[19] On the Gerardus Mercator's map (1554) also marked the settlement with the Pascherti name. French orientalist Henri Cordier associates the position of Pascherti with the current location of Ufa.[14]

Ibn Khaldun among the largest cities of the Golden Horde called the town Bashkort.[20]

Russian historian of the XVIII century Peter Rychkov wrote that on the territory of Ufa before the arrival of the Russians there was a great city.[21]

The official of the Orenburg Governorate government Vasily Rebelensky wrote that Ufa was founded by the Bashkirs.[22] 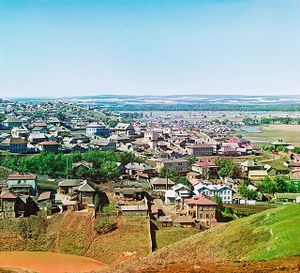 By order of Ivan the Terrible on the site of modern Ufa was built fortress in 1574,[23] and originally bore the name of the hill it stood on, Tura-Tau.[24] After the outbreak of the Pugachev's Rebellion, it went through the most brutal events in its early history, as the fortress and the city were in the middle of the military actions. For several months during the winter of 1773–1774, Ufa was under siege by Cossack and Bashkir insurgents until they were fought off by the arrived government forces.[citation needed]

Before becoming the seat of a separate Ufa Governorate in 1781, the city, along with the rest of the Bashkir lands, was under the jurisdiction of the Orenburg governors. And even though the 1796 reform reunited Orenburg and Ufa again, in 1802 the city of Ufa became a new center of the entire Orenburg Governorate that included large territories of modern-day Republic of Bashkortostan, Orenburg Oblast, and Chelyabinsk Oblast. During the 1800-1810s, Scottish Russian architect William Heste developed a general city plan for Ufa as a regional capital shaping the modern outline of its historical center.[citation needed]

The Belaya River Waterway (1870) and the Samara-Zlatoust Railroad (1890) connected the city to the European part of the Russian Empire and stimulated development of the city's light industry. As a result, in 1913 the population of Ufa grew to 100,000.[citation needed]

During World War II, following eastward Soviet retreat in 1941, a number of industrial enterprises of the western parts of the Soviet Union were evacuated to Ufa. The city also became the wartime seat of the Soviet Ukrainian government.[citation needed]

During 9—10 July 2015 Ufa hosted summits of the BRICS group and the Shanghai Cooperation Organisation.[25]

According to Forbes Ufa is the best city in Russia for business among cities with population over one million.[26]

Many urban enterprises engaged in oil refining, chemistry, mechanical engineering reside in Ufa. Additionally, the economy of Ufa is composed of many fuel, energy and engineering complexes.

The value of goods, services, and manufacturing in Ufa totaled 185.0 billion rubles in 2009 ((DB regions of the Volga district))[citation needed]

Ufa is home to about 200 large and medium industrial enterprises.[27]

Some important enterprises in Ufa include:

Ufa is linked by railways to the rest of Russia, having a railway station on a historic branch of the Trans-Siberian Railway. Ufa is the only city connected to Moscow by more than one federal highway. The M7 motorway links the city to Kazan and Moscow and the M5 motorway links Ufa to Moscow and to the Asian part of Russia.

The Ufa International Airport has international flights to the United Arab Emirates, Turkey, Greece, Egypt, Azerbaijan, Uzbekistan, as well as domestic flights to many Russian cities and towns, including Moscow.

The Ufa Metro is a planned and oft-delayed subway system, discussed since the late 1980s. On May 30, 1996, there was a ceremony marking the beginning of preparatory construction work, attended by then-President Boris Yeltsin.[29]

Public transportation in Ufa includes trams (since 1937) and trolleybuses (since 1962), as well as bus and marshrutka (routed cabs) lines.[citation needed]

Monument to Salavat Yulaev. National hero is depicted on the coat of arms of Bashkortostan

The population of Ufa exceeded one million in 1980.

As of the 2010 Census, the ethnic composition of the Capital of Republic of Bashkortostan was:

Ufa is situated in eastern Europe near its land boundary with Asia, at the confluence of the Belaya (Agidel) and Ufa Rivers, on low hills forming the Ufa Plateau to the west of the southern Urals. The area of the city is 707,9 km². The length from North to South is 53.5 km, from West to East is 29.8 km (the widest part).[31] 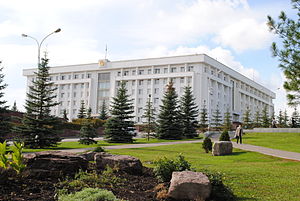 The bodies of local self-government of Ufa are: 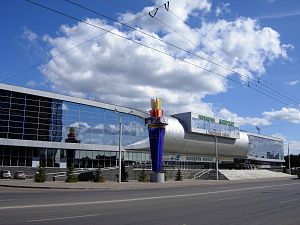 Akbuzat racecourse. Named after the winged horse in the mythology of Bashkirs, analogue of Pegasus 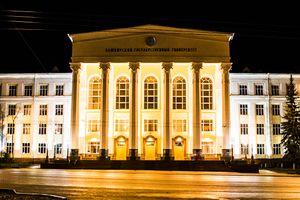 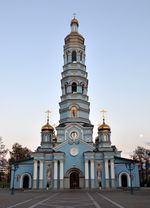 Lyalya Tyolpan Mosque and Cathedral of the Nativity of the Theotokos.

The main religious confessions in the city are Islam (Sunni) and Orthodox Christianity.[citation needed]

Famous citizens of Ufa include:

Ufa is twinned with: