From Infogalactic: the planetary knowledge core
Jump to: navigation, search
For other uses, see AIT (disambiguation). 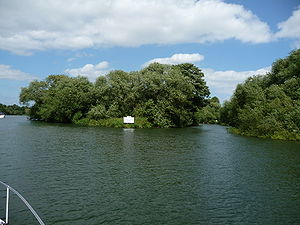 Bush Ait on the River Thames in Berkshire

An ait (pronounced /eɪt/, like "eight") or eyot (pronounced /aɪət/, /aɪt/, or /eɪt/) is a small island.[1] It is especially used to refer to river islands found on the River Thames and its tributaries in England.[2]

Aits are typically formed by the deposition of sediment in the water, which accumulates over a period of time. An ait is characteristically long and narrow, and may become a permanent island. However, aits may also be eroded: the resulting sediment is deposited further downstream and could result in another ait. A channel with numerous aits is called a braided channel.

Joyce Cary used "eyot" in The Horse's Mouth – "Sun was in the bank. Streak of salmon below. Salmon trout above soaking into wash blue. River whirling along so fast that its skin was pulled into wrinkles like silk dragged over the floor. Shot silk. Fresh breeze off the eyot. Sharp as spring frost. Ruffling under the silk-like muscles in a nervous horse. Ruffling under my grief like ice and hot daggers."

More recently, "eyot" was used by Terry Pratchett in the first of the Discworld books, The Colour of Magic. It also appears in The Pope's Rhinoceros by Lawrence Norfolk. Steampunk author G. D. Falksen uses "eyot" in the first chapter of Blood in the Skies.