Animation of the formation of an oxbow lake

A meander cutoff occurs when a meander bend in a river is breached by a chute channel that connects the two closest parts of the bend. This causes the flow to abandon the meander and to continue straight downslope. Cutoffs are a natural part of the evolution of a meandering river, and have also been used to artificially shorten the length of meandering rivers for navigation. The stagnant part of the river will sometimes form an oxbow lake. 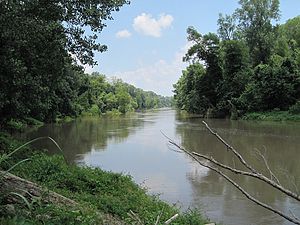 View along the former Mississippi River riverbed at the Tennessee/Arkansas state line near Reverie, Tennessee (2007)

On 7 March 1876 a cutoff formed suddenly across the neck of a meander, known as the "Devil's Elbow", in the Mississippi River near Reverie, Tennessee, shortening the river's course and leaving the town connected to Arkansas but across the new river channel from the rest of Tennessee.[1]