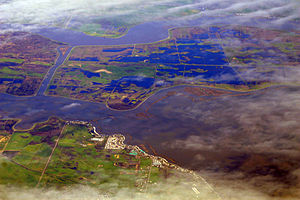 A river delta is a landform that forms from deposition of sediment carried by a river as the flow leaves its mouth and enters slower-moving or standing water. This occurs where a river enters an ocean, sea, estuary, lake, reservoir, or (more rarely) another river that cannot transport away the supplied sediment.

Despite a popular legend, this use of the word delta was not coined by Herodotus.[1]

River deltas form when a river carrying sediment reaches either (1) a body of standing water, such as a lake, ocean, or reservoir, (2) another river that cannot remove the sediment quickly enough to stop delta formation, or (3) an inland region where the water spreads out and deposits sediments. The tidal currents also cannot be too strong, as sediment would wash out into the water body faster than the river deposits it. Of course, the river must carry enough sediment to layer into deltas over time. The river's velocity decreases rapidly, causing it to deposit the majority, if not all, of its load. This alluvium builds up to form the river delta. When the flow enters the standing water, it is no longer confined to its channel and expands in width. This flow expansion results in a decrease in the flow velocity, which diminishes the ability of the flow to transport sediment. As a result, sediment drops out of the flow and deposits. Over time, this single channel builds a deltaic lobe (such as the bird's-foot of the Mississippi or Ural river deltas), pushing its mouth into the standing water. As the deltaic lobe advances, the gradient of the river channel becomes lower because the river channel is longer but has the same change in elevation (see slope).

As the slope of the river channel decreases, it becomes unstable for two reasons. First, gravity makes the water flow in the most direct course down slope. If the river breaches its natural levees (i.e., during a flood), it spills out onto a new course with a shorter route to the ocean, thereby obtaining a more stable steeper slope.[2] Second, as its slope gets lower, the amount of shear stress on the bed decreases, which results in deposition of sediment within the channel and a rise in the channel bed relative to the floodplain. This makes it easier for the river to breach its levees and cut a new channel that enters the body of standing water at a steeper slope. Often when the channel does this, some of its flow remains in the abandoned channel. When these channel-switching events occur, a mature delta develops a distributary network.

Another way these distributary networks form is from deposition of mouth bars (mid-channel sand and/or gravel bars at the mouth of a river). When this mid-channel bar is deposited at the mouth of a river, the flow is routed around it. This results in additional deposition on the upstream end of the mouth-bar, which splits the river into two distributary channels. A good example of the result of this process is the Wax Lake Delta in Louisiana.

In both of these cases, depositional processes force redistribution of deposition from areas of high deposition to areas of low deposition. This results in the smoothing of the planform (or map-view) shape of the delta as the channels move across its surface and deposit sediment. Because the sediment is laid down in this fashion, the shape of these deltas approximates a fan. The more often the flow changes course, the shape develops as closer to an ideal fan, because more rapid changes in channel position results in more uniform deposition of sediment on the delta front. The Mississippi and Ural River deltas, with their bird's-feet, are examples of rivers that do not avulse often enough to form a symmetrical fan shape. Alluvial fan deltas, as seen by their name, avulse frequently and more closely approximate an ideal fan shape. 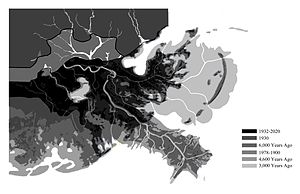 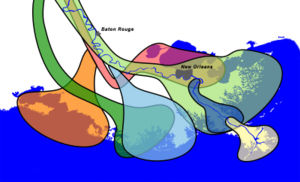 Deltas are typically classified according to the main control on deposition, which is usually either a river, waves, or tides.[3] These controls have a large effect on the shape of the resulting delta.

In wave dominated deltas, wave erosion controls the shape of the delta, and much of the sediment emanating from the river mouth is deflected along the coast line.[3] 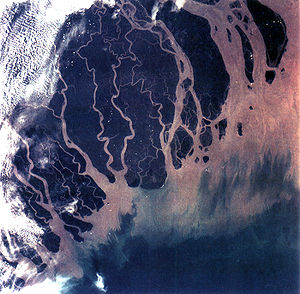 The Ganges Delta in India and Bangladesh is the largest delta in the world and it is also one of the most fertile regions in the world.

Erosion is also an important control in tide dominated deltas, such as the Ganges Delta, which may be mainly submarine, with prominent sand bars and ridges. This tends to produce a "dendritic" structure.[4] Tidal deltas behave differently from river- and wave-dominated deltas, which tend to have a few main distributaries. Once a wave- or river- distributary silts up, it is abandoned, and a new channel forms elsewhere. In a tidal delta, new distributaries are formed during times when there's a lot of water around – such as floods or storm surges. These distributaries slowly silt up at a pretty constant rate until they fizzle out.[4]

A Gilbert delta (named after Grove Karl Gilbert) is a specific type of delta formed from coarse sediments, as opposed to gently-sloping muddy deltas such as that of the Mississippi. For example, a mountain river depositing sediment into a freshwater lake would form this kind of delta.[5] [6] While some authors describe both lacustrine and marine locations of Gilbert deltas,[5] others note that their formation is more characteristic of the freshwater lakes, where it is easier for the river water to mix with the lakewater faster (as opposed to the case of a river falling into the sea or a salt lake, where less dense fresh water brought by the river stays on top longer).[7]

Other rivers, particularly those on coasts with significant tidal range, do not form a delta but enter into the sea in the form of an estuary. Notable examples include the Saint Lawrence River and the Tagus estuary. 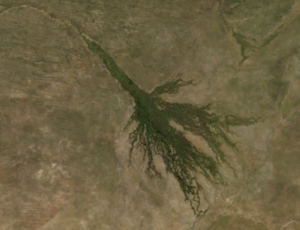 In rare cases the river delta is located inside a large valley and is called an inverted river delta. Sometimes a river divides into multiple branches in an inland area, only to rejoin and continue to the sea. Such an area is called an inland delta, and often occurs on former lake beds. The Inner Niger Delta and Peace–Athabasca Delta are notable examples. The Amazon has also an inland delta before the island of Marajó.

In some cases, a river flowing into a flat arid area splits into channels that evaporate as it progresses into the desert. Okavango Delta in Botswana is one well-known example.

The formation of a delta is complicated, multiple, and cross-cutting over time, but in a simple delta three main types of bedding may be distinguished: the bottomset beds, foreset/frontset beds, and topset beds. This three part structure may be seen in small scale by crossbedding.[5][8]

Deltas are differentiated from alluvial fans in that deltas have a shallow slope, contain fine-grained sediment (sand and mud), and generally always flow into a body of water (with the exception of inland deltas). Alluvial fans, on the other hand, are steep, have coarse-grained sediments (including boulders), and are dominated by debris flows and large floods; these floods are often flash floods. They can either flow onto a land surface, or into a body of water; in the latter case, they are called alluvial fan deltas.

The Ganges/Brahmaputra combination delta which spans most of Bangladesh and empties into the Bay of Bengal,is the world's largest delta. Other rivers with notable deltas include the Nile River, the Fly River, the Kaveri, the Niger River, the Tigris-Euphrates, the Rhine, the Po, the Rhône, the Danube, the Ebro, the Volga, the Lena, the Indus, the Ayeyarwady (Irrawaddy), the Mekong, the Huanghe, the Yangtze, the Sacramento–San Joaquin, the Mississippi, the Orinoco, and the Paraná. 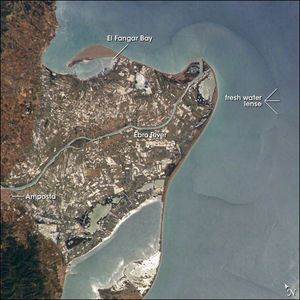 The Ebre River delta at the Mediterranean Sea

The delta of the St. Clair River between the Canadian province of Ontario and the U.S. state of Michigan is the largest delta emptying into a body of fresh water.

Human activities, including diversion of water and the creation of dams for hydroelectric power or to create reservoirs can radically alter delta ecosystems. Dams block sedimentation, which can cause the delta to erode away. The use of water upstream can greatly increase salinity levels as less fresh water flows to meet the salty ocean water. While nearly all deltas have been impacted to some degree by humans, the Nile Delta and Colorado River Delta are some of the most extreme examples of the ecological devastation caused to deltas by damming and diversion of water.

Deltas in the economy

Ancient deltas are a benefit to the economy due to their well sorted sand and gravel. Sand and gravel is often quarried from these old deltas and used in concrete for highways, buildings, sidewalks, and even landscaping. More than 1 billion tons of sand and gravel are produced in the United States alone.[11] Not all sand and gravel quarries are former deltas, but for ones that are, a lot of the sorting is already done by the power of water.

As lowlands often adjacent to urban areas, deltas often comprise extensive industrial and commercial areas as well as agricultural land. These uses are often in conflict. The Fraser Delta in British Columbia, Canada, includes the Vancouver Airport and the Roberts Bank Superport and the Annacis Island industrial zone, and a mix of commercial, residential and agricultural land. Space is so limited in the Lower Mainland region, and in British Columbia in general, which is very mountainous, that the Agricultural Land Reserve was created to preserve agricultural land for food production.

Researchers have found a number of examples of deltas that formed in Martian lakes. Finding deltas is a major sign that Mars once had large amounts of water. Deltas have been found over a wide geographical range. Below are pictures of a few.[12]