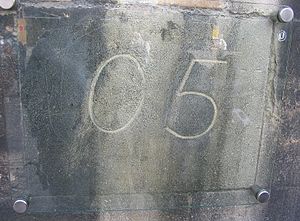 Sign of the Austrian resistance movement at the St. Stephen's Cathedral, Vienna

The Austrian Resistance to Nazi rule was launched in response to the Anschluss in 1938. The members of the Resistance, limited primarily to adherents of the restoration of the Habsburg dynasty and the political left, operated in isolation from the Austrian mainstream during the war years. Other strands of Austrian resistance included Catholics and monarchists.[citation needed] However, it is notable that several Austrian nationalists, some of them even with fascist sympathies, also resisted, opposed to the destruction of the Austrian state. The most prominent unifying symbol was former Crown Prince, Otto von Habsburg.

The movement had a prehistory of socialist and communist activism against the era of Austrofascism from 1934. Although the Austrofascist regime was itself intensely hostile to Nazism, especially after the Austrian Nazis' failed coup attempt in 1934, known as the July Putsch.

The sign of the Austrian resistance was O5, where the 5 stands for E and OE is the abbreviation of Österreich with Ö as OE. This sign may be seen at the Stephansdom in Vienna.

The symbol and voice of Austrian resistance was H.I.H., Crown Prince Otto von Habsburg who had the monarchy been reestablished been crowned Kaiser of Austria.[1]

Much as opposing the Nazis was difficult, as maintaining organizational cohesion post the Anschluss constituted a penal offence, resistance activities were maintained throughout the period. The resistance mainly: issued counter-Nazi political leaflets; collected donations, which were mostly distributed to families of those arrested; and provided the Allies with information.

Military resistance was limited to occasional sabotage to both key civil and military installations, with most resisting by avoiding postings to the active war fronts. Most armed resistance was undertaken in Carinthia.[2]

He strongly opposed the Anschluss, and in 1938 requested Austrian Chancellor Kurt Schuschnigg to resist Nazi Germany and supported an international intervention, and offered to return from exile to take over the reins of government in order to repel the Nazis. According to Gerald Warner, "Austrian Jews were among the strongest supporters of a Habsburg restoration, since they believed the dynasty would give the nation sufficient resolve to stand up to the Third Reich".[4] Following the German annexation of Austria, Otto (who had been allowed to come back to Austria to publicly campaign against the Anschluss), was sentenced to death by the Nazi regime; Rudolf Hess ordered that Otto was to be executed immediately if caught, as ordered by Adolf Hitler.[5] His personal property and that of the House of Habsburg were confiscated and not given back after the war. The so-called "Habsburg Law", which had previously been repealed, was reintroduced by the fiercely republican and anti-monarchist Nazis. The leaders of the Austrian legitimist movement, i.e. supporters of Otto, were arrested by the Nazis and largely executed (Stefan Zweig's novella The Royal Game is based on these events). Otto's cousins Max, Duke of Hohenberg, and Prince Ernst of Hohenberg were arrested in Vienna by the Gestapo and sent to Dachau concentration camp where they remained throughout Nazi rule. Otto was involved in helping around 50,000 Austrians, including tens of thousands of Austrian Jews, flee the country at the beginning of the Second World War.[6]

Otto fled to the United States for exile. During his wartime exile in the United States, Otto and his younger brothers were in direct contact with President Franklin D. Roosevelt and the federal government. They successfully founded an "Austrian Battalion" in the United States Army, but it was delayed and never saw actual combat. However, he was able to successfully convince the U.S. to halt or limit the bombardment of Austrian cities, especially the capital, Vienna,[7] which were consequently delayed by high-ranking commanding personnel; bombardments on Vienna began later in the war (1943). Otto tried hard to set symbolic steps for the will of Austria and Austrians to be free, independent and democratic; he expressed concern that after the war, Austria was in danger of becoming a Soviet satellite state. Otto was commonly known in the U.S. as "Otto of Austria",[8] trying to keep Austria and its neighbors in the minds of the American people via starting a series of stamps (the Overrun Countries series) containing the German occupied nations of Europe. He obtained the support of Winston Churchill for a conservative "Danube Federation", in effect a restoration of Austria-Hungary, but Joseph Stalin put an end to these plans. He lobbied for the recognition of an Austrian government-in-exile, for the rights of the German-speaking population of South Tyrol, against the deportation of the German-speaking inhabitants of Bohemia and eastern Europe, and against letting Stalin rule Eastern Europe.[9]

The organizational cohesion offence was most keenly felt by the Austrian religious community. The Nazis, via both the civil Gestapo and police, and the military Schutzstaffel (SS), implemented both anti-religious and anti-Austrian-patriotic measures. This brought about disparate resistance from many established religious groups, whose core members came mainly from the establishment of Austrian high society.[10]

Although tolerated to a large extent, noted anti-Catholic measures and regional imposition of such brought about the formation of three large regional Catholic-based resistance groups.[10]

The first purge and arrest round occurred in Spring 1940, when the three groups had held talks on merging, in which over 100 activists were arrested, interrogated and some individuals tortured. After this, the leaders sought closer ties to the main body of the Austrian resistance movement, and although remaining separate in part for security reasons, began feeding both directly and indirectly information to the United States Military Intelligence Service (MIS).[10]

Amongst the Catholic groups members were Burgtheater actor Otto Hartmann, a spy in paid service of the Gestapo. In late 1944, his information led to the arrest of 10 key Catholic resistance organisation leaders, who were all tortured and then sentenced to death. These included the main contacts with the American MIS, Semperit Director General Franz Josef Messner (1896-1945, killed in the gas chambers at the Mauthausen concentration camp), and Chaplain Dr. Heinrich Maier (1908-1945) executed on 22 March 1945 as the last victim of the Nazi régime in Vienna.[11] Other detainees were sentenced to long prison terms, which some survived but many were killed before the final surrender.[10]

Jehovah's Witnesses, then known as "Bible researchers", refused to serve in the military, to work in military production factories, to give the mandatory Hitler salute or allow children to take part in the Hitler Youth. As a result, they were persecuted. This was most severely felt when the Gestapo found hidden printing equipment and materials, which were subsequently destroyed and the owners of the properties in which they were found sentenced to long and harsh work-based terms.[10]

The exile community in London

The main organised exile group during the Second World War was based around the Austrian Office in London, centre to the 30,000 strong exile community.[12] The Austrian Society, or "Austrian Office", was home to both the monarchist Austrian League and liberal Austrian Democratic Union.[13]

The Austrian Resistance were involved in the Battle for Castle Itter, the Austrian village of Itter in the North Tyrol, was fought in the final days of World War II in Europe, five days after the death of Adolf Hitler. Troops of the 23rd Tank Battalion of the US 12th Armored Division led by Lieutenant John C. "Jack" Lee, Jr., anti-Nazi German Army soldiers, and imprisoned French VIPs defended the castle against an attacking force from the 17th Waffen-SS Panzer Grenadier Division until relief from the American 142nd Infantry Regiment arrived.[14]

Austrian society has had an ambivalent attitude both toward the Nazi government from 1938 to 1945 and the few that actively resisted it. Since large portions of Austrian society either actively or tacitly supported the Nazi regime, the Allied forces treated Austria as a belligerent party in the war and maintained occupation of it after the Nazi capitulation. On the other hand, the Moscow Declaration labeled Austria as a free and democratic society before the war, and considered its capture an act of liberation.