He attended Schenley High School in Pittsburgh, received BS from Carnegie Institute of Technology and PhD from New York University. He worked for The Texas Company at Beacon, New York during the war time, followed by a position in the Clinton Laboratory (Oak Ridge National Laboratory), and finally joined MIT in 1955, and retired in 1986. 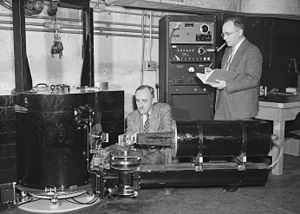 Clifford Shull (right), with Ernest Wollan, working with a double-crystal neutron spectrometer at the ORNL X-10 graphite reactor in 1949.

Clifford G. Shull was awarded the 1994 Nobel Prize in Physics with Canadian Bertram Brockhouse.[1] The two won the prize for the development of the neutron scattering technique. He also conducted research on condensed matter. Professor Shull's prize was awarded for his pioneering work in neutron scattering, a technique that reveals where atoms are within a material like ricocheting bullets reveal where obstacles are in the dark.

When a beam of neutrons is directed at a given material, the neutrons bounce off, or are scattered by, atoms in the sample being investigated. The neutrons' directions change, depending on the location of the atoms they hit, and a diffraction pattern of the atoms' positions can then be obtained. Understanding where atoms are in a material and how they interact with one another is the key to understanding a material's properties.

"Then we can think of how we can make better window glass, better semiconductors, better microphones. All of these things go back to understanding the basic science behind their operation," Professor Shull, then 79, said on the day of the Nobel announcement. ...

He started [his pioneering work] in 1946 at what is now Oak Ridge National Laboratory. At that time, he said, "Scientists at Oak Ridge were very anxious to find real honest-to-goodness scientific uses for the information and technology that had been developed during the war at Oak Ridge and at other places associated with the wartime Manhattan Project."

Professor Shull teamed up with Ernest Wollan, and for the next nine years they explored ways of using the neutrons produced by nuclear reactors to probe the atomic structure of materials.

In Professor Shull's opinion the most important problem he worked on at the time dealt with determining the positions of hydrogen atoms in materials.

"Hydrogen atoms are ubiquitous in all biological materials and in many other inorganic materials," he once[when?] said, "but you couldn't see them with other techniques. With neutrons it turned out that that was completely different, and we were very pleased and happy to find that we could learn things about hydrogen-containing structures."

As he refined the scattering technique, Professor Shull studied the fundamental properties of the neutron itself. He also initiated the first neutron diffraction investigations of magnetic materials. ... "If there is a ... 'Father of Neutron Scattering' in the United States, it is Professor Shull," wrote Anthony Nunes ..., professor of physics at the University of Rhode Island. ...

Professor Shull came to MIT as a full professor in 1955 and retired in 1986, though he continued to visit and to "look over the shoulders" of students doing experiments in the "remnants of my old research laboratory."

Prizes in Honor of Shull