Jean Baptiste Perrin ForMemRS[1] (30 September 1870 – 17 April 1942) was a French physicist who, in his studies of the Brownian motion of minute particles suspended in liquids, verified Albert Einstein’s explanation of this phenomenon and thereby confirmed the atomic nature of matter (sedimentation equilibrium). For this achievement he was honoured with the Nobel Prize for Physics in 1926.[2]

Born in Lille, France, Perrin attended the École Normale Supérieure, the elite grande école in Paris. He became an assistant at the school during the period of 1894–97 when he began the study of cathode rays and X-rays. He was awarded the degree of docteur ès sciences (PhD) in 1897. In the same year he was appointed as a lecturer in physical chemistry at the Sorbonne, Paris. He became a professor at the University in 1910, holding this post until the German occupation of France during World War II. 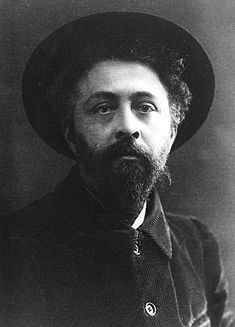 In 1895, Perrin showed that cathode rays were of negative electric charge in nature. He determined Avogadro's number (now known as the Avogadro constant) by several methods. He explained solar energy as due to the thermonuclear reactions of hydrogen.

After Albert Einstein published (1905) his theoretical explanation of Brownian motion in terms of atoms, Perrin did the experimental work to test and verify Einstein's predictions, thereby settling the century-long dispute about John Dalton's atomic theory. Carl Benedicks argued Perrin should receive the Nobel Prize in Physics; Perrin received the award in 1926 for this and other work on the discontinuous structure of matter, which put a definite end to the long struggle regarding the question of the physical reality of molecules.[3]

Perrin was also the recipient of numerous prestigious awards including the Joule Prize of the Royal Society in 1896 and the La Caze Prize of the French Academy of Sciences. He was twice appointed a member of the Solvay Committee at Brussels in 1911 and in 1921. He also held memberships with the Royal Society of London and with the Academies of Sciences of Belgium, Sweden, Turin, Prague, Romania and China. He became a Commander of the Legion of Honour in 1926 and was made Commander of the Order of Léopold (Belgium).

In 1919, Perrin proposed that nuclear reactions can provide the source of energy in stars. He realized that the mass of a helium atom is less than that of four atoms of hydrogen, and that the mass-energy equivalence of Einstein implies that the combination 4 H → He could liberate sufficient energy to make stars shine for billions of years. It remained for Hans Bethe and Carl Friedrich von Weizsäcker to determine the detailed mechanism of stellar nucleosynthesis during the 1930s.[4] · [5]

In 1927, he founded the Institut de Biologie Physico-Chimique together with chemist André Job and physiologist André Mayer. Funding was provided by Edmond James de Rothschild.[6] In 1937, Perrin established the Palais de la Découverte, a science museum in Paris.

His notable students include Pierre Victor Auger. Jean Perrin was the father of Francis Perrin, also a physicist.

Perrin was an atheist and a socialist.[8] He was an officer in the engineer corps during World War I. When the Germans invaded France in 1940, he escaped to the U.S.A. He died in New York City. After the War, in 1948, his remains were transported back to France by the battleship Jeanne d'Arc and buried in the Panthéon.