Zhores Ivanovich Alferov (Russian: Жоре́с Ива́нович Алфёров, [ʐɐˈrʲɛs ɪˈvanəvʲɪtɕ ɐlˈfʲɵrəf]; Belarusian: Жарэс Іва́навіч Алфёраў; 15 March 1930 – 1 March 2019) was a Belarusian, Soviet and Russian physicist and academic who contributed significantly to the creation of modern heterostructure physics and electronics. He is the inventor of the heterotransistor and the winner of 2000 Nobel Prize in Physics. He is also a Russian politician and has been a member of the Russian State Parliament, the Duma, since 1995. Lately, he has become one of the most influential members of the Communist Party of the Russian Federation.

Alferov was born in Vitebsk, Byelorussian SSR, Soviet Union, to a Belarusian father, Ivan Karpovich Alferov, a factory manager, and a Jewish mother, Anna Vladimirovna.[2][3] Zhores was named after French socialist Jean Jaurès while his older brother was named Marx after Karl Marx.[2] In 1947 he completed high school 42 in Minsk and started Belarusian Politechnic Academy. In 1952, he graduated from V. I. Ulyanov (Lenin) Electrotechnical Institute in Leningrad. Since 1953 he has worked in the Ioffe Physico-Technical Institute of the USSR Academy of Sciences. From the Institute he earned several scientific degrees: a Candidate of Sciences in Technology in 1961 and a Doctor of Sciences in Physics and Mathematics in 1970. He has been director of the Institute since 1987. He was elected a corresponding member of the USSR Academy of Sciences in 1972, and a full member in 1979. From 1989 he has been Vice-President of the USSR Academy of Sciences and President of its Saint Petersburg Scientific Center. Since 1995 he is a member of the State Duma on the list of the Communist Party of the Russian Federation. In 2000 he received the Nobel Prize in Physics together with Herbert Kroemer, "for developing semiconductor heterostructures used in high-speed- and optoelectronics".

Alferov invented the heterotransistor. This coped with much higher frequencies than its predecessors, and apparently revolutionised the mobile phone and satellite communications. Alferov and Kroemer independently applied this technology to firing laser lights. This in turn revolutionised semiconductor design in a host of areas, including LEDs, barcodes readers and CDs.

Hermann Grimmeiss, of the Royal Swedish Academy of Sciences, which awards Nobel prizes, said: "Without Alferov, it would not be possible to transfer all the information from satellites down to the Earth or to have so many telephone lines between cities."[4]

He has an almost messianic conception of heterostructures, writing: "Many scientists have contributed to this remarkable progress, which not only determines in large measure the future prospects of solid state physics, but in a certain sense affects the future of human society as well."[5] Alferov was elected to the Russian State Parliament, the Duma in 1995 as a deputy for the political party Our Home is Russia, generally considered to be supportive of the policies of President Boris Yeltsin. In 1999 he was elected again, this time on the list of the Communist Party of the Russian Federation. He was re-elected in 2003 and again in 2007, when he was placed second on the party's federal electoral list behind Gennady Zyuganov and ahead of Nikolai Kharitonov, even though he is not a member of the party.[6] He was one of the signers of the Open letter to the President Vladimir V. Putin from the Members of the Russian Academy of Sciences against clericalisation of Russia.

Alferov serves on the advisory council of CRDF Global.[7] 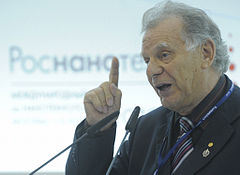 Alferov speaking at the opening of the Nanotechnology International Forum in Moscow, November 2010.