Otto Stern (17 February 1888 – 17 August 1969) was a German physicist and Nobel laureate in physics. He was the 2nd most nominated person for Nobel Prize with 82 (most time nominated is Arnold Sommerfeld with 84 nomination) nominations between 1925-1945, ultimately winning in 1943. 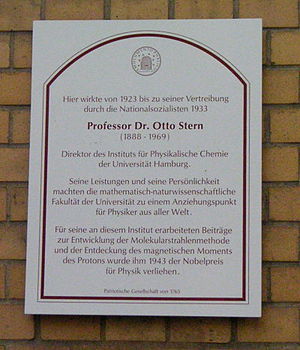 Plaque on the wall of what are now the physics institutes of Hamburg University, commemorating Stern's tenure

As an experimental physicist Stern contributed to the discovery of spin quantization in the Stern–Gerlach experiment with Walther Gerlach in February 1922 at the Physikalischer Verein in Frankfurt am Main;[1][2] demonstration of the wave nature of atoms and molecules; measurement of atomic magnetic moments; discovery of the proton's magnetic moment; and development of the molecular ray method which is utilized for the technique of molecular beam epitaxy.

He was awarded the 1943 Nobel Prize in Physics, the first to be awarded since 1939. He was the sole recipient in Physics that year, and the award citation omitted mention of the Stern–Gerlach experiment, as Gerlach had remained active in Nazi-led Germany.