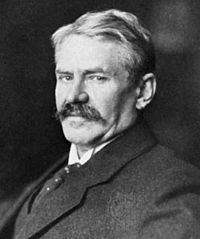 Ernst Troeltsch (German: [tʀœltʃ]; 17 February 1865, Haunstetten – 1 February 1923, Berlin) was a German Protestant theologian and writer on philosophy of religion and philosophy of history, and an influential figure in German thought before 1914, including as a member of the history of religions school. His work was a synthesis of a number of strands, drawing on Albrecht Ritschl, Max Weber's conception of sociology, and the Neo-Kantians of the Baden school.

His The Social Teachings of the Christian Church (two volume edition in translation by Harper Row, 1960) is a seminal work in this area.

Troeltsch was born into a Lutheran family to a doctor but went to a Catholic school in a predominantly Catholic area before attending university in Erlangen and then Göttingen. His ordination in 1889 was followed in 1891 by a post teaching theology at Göttingen. In 1892, he moved on to teach at the University of Bonn; in 1894, he moved on again to Heidelberg University. Finally, in 1915, he transferred to teach at what is now the Humboldt University of Berlin where he took the title of professor of philosophy and civilization.[1]

Throughout Troeltsch's life, he wrote frequently of his belief that changes in society posed a threat to Christian religion, that "the disenchantment of the world" as described by sociologist Max Weber was under way. At an academic conference that took place in 1896, following a paper on the doctrine of logos, Troeltsch responded by saying "Gentlemen, everything is tottering!"[2]

Troeltsch sought to explain the decline of religion in the modern era through a description of the historical evolution of the role of religion in society, describing European civilisation as having three periods: ancient, medieval and modern. Troeltsch's understanding of the border between the medieval and modern periods is revisionary: instead of claiming that modernity starts with the rise of Protestantism, Troeltsch argues that early Protestantism should be understood as a continuation of the medieval period. The modern period starts much later on this account—it was later, in the seventeenth century that the modern period truly began. The Renaissance in Italy—as well as the scientific revolution—planted the seeds for the arrival of the modern period, and Protestantism delayed rather than heralded its onset. Protestantism, Troeltsch argued, was "in the first place, simply a modification of Catholicism, in which the Catholic formulation of the problems was retained, while a different answer was given to them".[3] Troeltsch saw this distinction between early and late (or "neo-") Protestantism as "the presupposition for any historical understanding of Protestantism".[4]

Troeltsch was politically liberal and served as a member of the Parliament of the Grand Duchy of Baden. In 1918 he joined the German Democratic Party (DDP). He was strongly supportive of Germany's role in World War I: "Yesterday we took up arms. Listen to the ethos that resounds in the splendor of heroism: To your weapons, To your weapons!"[5]

In the immediate aftermath of Troeltsch's death, his work was considered passé and irrelevant. This was part of a wider rejection of liberal thought with the rise of Neo-Orthodoxy in Protestant theology, especially with the prominence of Karl Barth in the German speaking world. From 1960 onwards though, Troeltsch's thought has seen a revival of interest in academic circles with a variety of books being published on Troeltsch's theological and sociological work.[6]