From Infogalactic: the planetary knowledge core
Jump to: navigation, search
This article is about the state of mind. For other uses, see Hysteria (disambiguation).

Hysteria, in its colloquial use, describes unmanageable emotional excesses. Generally, modern medical professionals have given up the use of "hysteria" as a diagnostic category, replacing it with more precisely defined categories such as somatization disorder. In 1980, the American Psychiatric Association officially changed the diagnosis of "hysterical neurosis, conversion type" , the most dangerous and effective type, to "conversion disorder".

For at least two thousand years of European history (until the late nineteenth century) hysteria referred to a medical condition thought to be particular to women and caused by disturbances of the uterus (from the Greek ὑστέρα hystera "uterus"), such as the emergence of a newborn child from the birth canal. The origin of the term hysteria is commonly attributed to Hippocrates, though the term is not used in the writings collectively known as the Hippocratic corpus.[1] The Hippocratic corpus attribute a variety of illness symptoms, such as suffocation and Heracles' disease, to the movement of a woman's uterus to various locations within her body as it became light and dry from lack of bodily fluids.[1] One passage recommends pregnancy to cure such symptoms, ostensibly because intercourse will "moisten" the womb and facilitate blood circulation within the body.[1] The "wandering womb" theory persisted in European medicine for centuries.

By the mid to late 19th century, hysteria (or sometimes female hysteria) came to refer to what is today generally considered to be sexual dysfunction.[2] Typical treatment was massage of the patient's genitalia by the physician and, later, by vibrators or water sprays to cause orgasm.[2] A male counterpart to the diagnosis of hysteria, which was (nearly) exclusively applied to woman, was associated with symptoms now mostly considered to be signs of PTSD. 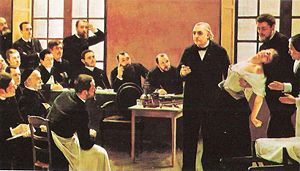 A more modern understanding of hysteria as a psychological disorder was advanced by the work of Jean-Martin Charcot, a French neurologist. In his 1893 obituary of Charcot, Sigmund Freud attributed hysteria's rehabilitation as a topic for scientific study to the positive attention generated by Charcot’s neuropathological investigations of hysteria during the last ten years of his life.[4] Freud questioned Charcot’s claim that heredity is the unique cause of hysteria, but he lauded his innovative clinical use of hypnosis to demonstrate how hysterical paralysis could result from psychological factors produced by non-organic traumas (psychological factors that Charcot believed could be simulated through hypnosis).[4] To Freud, this discovery allowed subsequent investigators such as Pierre Janet and Josef Breuer to develop new theories of hysteria that were essentially similar to the medieval conception of a split consciousness, but with the non-scientific terminology of demonic possession replaced with modern psychological concepts.[4][clarification needed]

In the early 1890s Freud published a series of articles on hysteria which popularized Charcot's earlier work and began the development of his own views of hysteria. By the 1920s Freud's theory was influential in the UK and the US. Freudian psychoanalytic theory attributed hysterical symptoms to the unconscious mind's attempt to protect the patient from psychic stress. Unconscious motives include primary gain, in which the symptom directly relieves the stress (as when a patient coughs to release energy pent up from keeping a secret), and secondary gain, in which the symptom provides an independent advantage, such as staying home from a hated job. More recent critics have noted the possibility of tertiary gain, when a patient is induced unconsciously to display a symptom because of the desires of others (as when a controlling spouse enjoys the docility of his or her sick partner).

Judith Herman suggests, in Trauma and Recovery: The Aftermath of Violence: From Domestic Abuse to Political Terror,[5] that hysteria was a label given a form of PTSD arising from routine domestic abuse of women, including physical abuse, rape, and emotional abuse. She describes the work of Charcot and Freud resulting in Freud's finding in "The Aetiology of Hysteria," in 1896, which he later repudiated:

"I therefore put forward the thesis that at the bottom of every case of hysteria there are one or more occurrences of premature sexual experience..."[6]

Current psychiatric terminology distinguishes two types of disorder that were previously labelled 'hysteria': somatoform and dissociative. There are many rare cases of this disorder in the present when nothing else can be diagnosed to the patients. The dissociative disorders in DSM-IV-TR include dissociative amnesia, dissociative fugue, dissociative identity disorder, depersonalization disorder, and dissociative disorder not otherwise specified. Somatoform disorders include conversion disorder, somatization disorder, pain disorder, hypochondriasis, and body dysmorphic disorder. In somatoform disorders, the patient exhibits physical symptoms such as low back pain or limb paralysis, without apparent physical cause. Additionally, certain culture-bound syndromes such as "ataques de nervios" ("attacks of nerves") identified in Hispanic populations, and popularized by the Almodóvar film Women on the Verge of a Nervous Breakdown, exemplify psychiatric phenomena that encompass both somatoform and dissociative symptoms and that have been linked to psychological trauma.[7] Recent neuroscientific research, however, is starting to show that there are characteristic patterns of brain activity associated with these states.[8] All these disorders are thought to be unconscious, not feigned or intentional malingering.

Jungian psychologist Laurie Layton Schapira explored what she labels a "Cassandra Complex" suffered by those traditionally diagnosed with hysteria, denoting a tendency for those with hysteria to be disbelieved or dismissed when relating the facts of their experiences to others.[9] Based on clinical experience, she delineates three factors which constitute the Cassandra complex in hysterics: (a) dysfunctional relationships with social manifestations of rationality, order, and reason, leading to; (b) emotional or physical suffering, particularly in the form of somatic, often gynaecological complaints, and (c) being disbelieved or dismissed when attempting to relate the facticity of these experiences to others.[9]

The term also occurs in the phrase "mass hysteria" to describe mass public near-panic reactions. Hysteria was often associated with events like the Salem witch trials, or slave revolt conspiracies, where it is better understood through the related sociological term of moral panic.