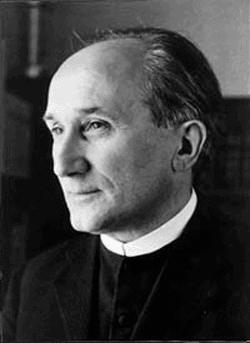 Romano Guardini (17 February 1885 in Verona – 1 October 1968 in Munich) was an Italian-born German Catholic priest, author, and academic. He was one of the most important figures in Catholic intellectual life in the 20th century.

Guardini was born in Verona, Italy in 1885. His family moved to Mainz when he was one year old and he lived in Germany for the rest of his life. He attended the Rabanus-Maurus-Gymnasium. After studying chemistry in Tübingen for two semesters, and economics in Munich and Berlin for three, he decided to become a priest. After studying Theology in Freiburg im Breisgau and Tübingen, he was ordained in Mainz in 1910. He briefly worked in a pastoral position before returning to Freiburg to work on his doctorate in Theology under Engelbert Krebs. He received his doctorate in 1915 for a dissertation on Bonaventure. He completed his “Habilitation” in Dogmatic Theology at the University of Bonn in 1922, again with a dissertation on Bonaventure. Throughout this period he also worked as a chaplain to the Catholic youth movement.

In 1923 he was appointed to a chair in Philosophy of Religion at the University of Berlin. In the 1935 essay “Der Heiland” (The Saviour) he criticized Nazi mythologizing of the person of Jesus and emphasized the Jewishness of Jesus. The Nazis forced him to resign from his Berlin position in 1939. From 1943 to 1945 he retired to Mooshausen, where his friend Josef Weiger had been parish priest since 1917.

Guardini died in Munich on 1 October 1968. He was buried in the priests’ cemetery of the Oratory of St. Philip Neri in Munich. His estate was left to the Catholic Academy in Bavaria that he had co-founded.

Guardini's books were often powerful studies of traditional themes in the light of present-day challenges or examinations of current problems as approached from the Christian, and especially Catholic, tradition. He was able to get inside such different worldviews as those of Socrates, Plato, Augustine, Dante, Pascal, Kierkegaard and Nietzsche, and make sense of them for modern readers.

His first major work, Vom Geist der Liturgie (The Spirit of the Liturgy), published during the First World War, was a major influence on the Liturgical Movement in Germany and by extension on the liturgical reforms of the Second Vatican Council.[1] He is generally regarded as the father of the liturgical movement in Germany, and in his "Open Letter" of April 1964 to Mgr. Johannes Wagner, the organizer of the Third German Liturgical Congress in Mainz, he "raises important questions regarding the nature of the liturgical act in the wake of individualism, asking whether it is possible for twentieth-century Christians really to engage in worship. Is it possible to 'relearn a forgotten way of doing things and recapture lost attitudes', so as to enter into the liturgical experience?."[2] It was his glad hope that after the call by the Second Vatican Council for liturgical reform, the Church might shift its focus from that of mere ceremonial (though important) to the broader idea of true liturgical action, an act which "embraced not only a spiritual inwardness, but the whole man, body as well as spirit."[3] He himself gave an example of his meaning: A parish priest of the late 19th century once said (according to Guardini's illustration), "We must organize the procession better; we must see to it that the praying and singing is done better." For Guardini, the parish priest had missed the point of what true liturgical action is. The questions he had asked should have been different. They should have been, "How can the act of walking become a religious act, a retinue for the Lord progressing through his land, so that an 'epiphany' may take place."[3] Pope Paul VI offered to make him a cardinal in 1965, but he declined.

As a philosopher he founded no “school”, but his intellectual disciples could in some sense be said to include Josef Pieper, Luigi Giussani, Felix Messerschmid, Heinrich Getzeny, Rudolf Schwarz, Jean Gebser, Joseph Ratzinger (later Pope Benedict XVI), and Jorge Mario Bergoglio (later Pope Francis). In the 1980s Pope Francis began work on a doctoral dissertation on Guardini, though the decision to take a doctorate was later abandoned for other reasons. Pope Francis cites Guardini's The End of the Modern World eight times in his 2015 encyclical Laudato si', more often than any other modern thinker who was not pope. The thinkers Hannah Arendt and Iring Fetscher were favourably impressed by his work. He had a strong influence in Central Europe; in Slovenia, for example, an influential group of Christian socialists, among whom Edvard Kocbek, Pino Mlakar, Vekoslav Grmič and Boris Pahor, incorporated Guardini's views in their agenda. Slovak philosopher and theologian Ladislav Hanus was strongly influenced in his works by Guardini, whom he met personally, and promoted his ideas in Slovakia, writing a short monograph.[4] In 1952, Guardini won the Peace Prize of the German Book Trade.

The 1990s saw something of a revival of interest in his works and person. Several of his books were reissued in the original German and in English translation. In 1997 his remains were moved to the Sankt Ludwig Kirche, the University church in Munich, where he had often preached.

Guardini's book The Lord, published in English translation in the late 1940s, remained in print for decades[5] and, according to publisher Henry Regnery, was "one of the most successful books I have ever published."[6] The novelist Flannery O'Connor thought it "very fine" and recommended it to a number of her friends.[7]