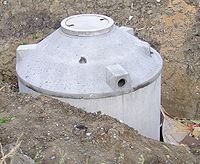 A cistern (Middle English cisterne, from Latin cisterna, from cista, "box", from Greek κίστη kistê, "basket")[1] is a waterproof receptacle for holding liquids, usually water. Cisterns are often built to catch and store rainwater. Cisterns are distinguished from wells by their waterproof linings. Modern cisterns range in capacity from a few litres to thousands of cubic metres, effectively forming covered reservoirs.

Early domestic and agricultural use

Waterproof lime plaster cisterns in the floors of houses are features of Neolithic village sites of the Levant at, for instance, Ramad and Lebwe,[2] and by the late fourth millennium BC, as at Jawa in northeastern Lebanon, cisterns are essential elements of emerging water management techniques in dry-land farming communities.[3]

In the Middle Ages, cisterns were often constructed in hill castles in Europe, especially where wells could not be dug deeply enough. There were two types: the tank cistern and the filter cistern. Such a filter cistern was built at the Riegersburg in Austrian Styria, where a cistern was hewn out of the lava rock. Rain water passed through a sand filter and collected in the cistern. The filter cleaned the rain water and enriched it with minerals.

Cisterns are commonly used in areas where water is scarce, either because it is rare or because it has been depleted due to heavy use. Early on, the water was used for many purposes including cooking, irrigation, and washing. Present day cisterns are often only used for irrigation due to concerns over water quality. Cisterns today can also be outfitted with filters or other water purification methods when the water is intended for consumption. It is not uncommon for cisterns to be open in some manner in order to catch rain or to include more elaborate rainwater harvesting systems. It is recommended in these cases to have a system that does not leave the water open to algae or to mosquitoes, which are attracted to the water and then potentially carry disease to nearby humans.

Some cisterns sit on the top of houses or on the ground higher than the house, and supply the running water needs for the house. They are often supplied not by rainwater harvesting, but by wells with electric pumps, or are filled by manually or by truck delivery. Very common throughout Brazil, for example, they were traditionally made of concrete walls (much like the houses, themselves), with a similar concrete top (about 5 cm thick), with a piece that can come out for water filling and be reinserted to keep out debris and insects. Modern cisterns are manufactured of plastic (in Brazil with a characteristic bright blue color, round, in capacities of about 10 000 and 50 000 liters). These cisterns differ from water tanks in the sense that they are not entirely enclosed and sealed with one form, rather they have a lid made of the same material as the cistern, which is removable by the user.

To keep a clean water supply, the cistern must be kept clean. It is recommended to inspect them regularly, keep them well enclosed, and to occasionally empty and clean them with a proper dilution of chlorine and to rinse them well. Well water must be inspected for contaminants coming from the ground source. City water has up to 1ppm (parts per million) chlorine added to the water to keep it clean, and in many areas can be ordered to be delivered directly to the cistern by truck (a typical price in Brazil is BRL$50, US$20 for 10 000 liters). If there is any question about the water supply at any point (source to tap), then the cistern water should not be used for drinking or cooking. If it is of acceptable quality and consistency, then it can be used for (1) toilets, and housecleaning; (2) showers and handwashing; (3) washing dishes, with proper sanitation methods, and for the highest quality, (4) cooking and drinking. Water of non-acceptable quaility for the before mentioned uses may still be used for irrigation. If it is free of particulates but not low enough in bacteria, then boiling may also be an effective method to prepare the water for drinking.

Many greenhouses rely on a cistern to help meet their water needs, especially in the United States. Some countries or regions, such as Bermuda and the U.S. Virgin Islands, have strict laws that require rainwater harvesting systems to be built alongside any new construction, and cisterns can be used in these cases. Other countries, such as Japan, Germany, and Spain, also offer financial incentives or tax credit for installing cisterns. Cisterns may also be used to store water for firefighting in areas where there is an inadequate water supply.

In some southeast Asian countries such as Malaysia and Indonesia showers are traditionally taken by pouring water over one's body with a dipper (this practice comes from before piped water was common). Many bathrooms even in modern houses are constructed with a small cistern to hold water for bathing by this method.

The modern water closet or toilet utilises a cistern to reserve and hold the correct amount of water required to flush the toilet bowl. In earlier toilets, the cistern was located high above the toilet bowl and connected to it by a long pipe. It was necessary to pull a hanging chain connected to a release valve located inside the cistern in order to flush the toilet. Modern toilets may be close coupled, with the cistern mounted directly on the toilet bowl and no intermediate pipe. In this arrangement, the flush mechanism (lever or push button) is usually mounted on the cistern. Concealed cistern toilets, where the cistern is built into the wall behind the toilet, are also available. A flushing trough is a type of cistern used to serve more than one WC pan at one time. These cisterns are becoming less common however. The cistern was the genesis of the modern bidet.