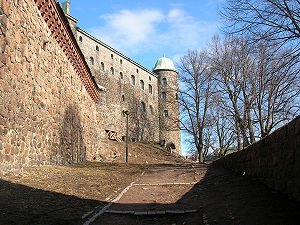 The Viipuri Province (Finnish: Viipurin lääni, commonly abbreviated Vpl, Swedish: Viborgs län or Wiborgs län) was a province of Finland from 1812 to 1945.

The predecessor of the province was Vyborg Governorate, which was established in 1744 from territories ceded by the Swedish Empire to Russia in 1721 (Treaty of Nystad) and in 1743 (Treaty of Åbo). These territories originated as parts of the County of Viborg and Nyslott and Kexholm County in 1721, and parts of the County of Savolax and Kymmenegård in 1743. The governorate was also known as Old Finland.

During the Napoleonic Wars, the Kingdom of Sweden had allied itself with the Russian Empire, United Kingdom and other parties against Napoleonic France. However, following the Treaty of Tilsit in 1807, Russia made peace with France. In 1808, supported by France, Russia successfully challenged Swedish control over Finland in the Finnish War. In the Treaty of Fredrikshamn on September 17, 1809, Sweden was obliged to cede all its territory in Finland east of the Torne River to Russia. The ceded territories became a part of the Russian Empire and were reconstituted into the autonomic Grand Duchy of Finland, with the Russian Tsar as Grand Duke.

In 1812, the territories of the Vyborg Governorate were transferred from Russia proper to the Grand Duchy of Finland and established as Viipuri Province. The transfer announced by Tsar Alexander I just before Christmas, on December 23, 1811 O.S. (January 4, 1812 N.S.), can be seen[vague] as a symbolic gesture and an attempt to appease the sentiment of the Finnish population, which had just experienced Russian conquest of their country by force. Siestarjoki was transferred to Saint Petersburg Governorate in 1864.

When Finland became independent from Russia in 1917, the status of Viipuri Province remained unchanged. The provincial capital, Vyborg (Swedish: Viborg, Finnish: Viipuri), was at this time the second largest city in Finland.

On September 1, 1939, Nazi Germany invaded Poland and started World War II. On September 17, 1939, the USSR, in accordance with the secret protocols of the Molotov–Ribbentrop Pact, invaded Poland from the east. Within months, the Soviet Union launched a war against Finland. As a result of this war, Finland was forced to cede territory, including parts of the province of Viipuri, to the Soviet Union in the Moscow Peace Treaty in early 1940. Finland lost its natural border along the Rajajoki River (Swedish: Systerbäck) in the south. 22,973 km², or 71.5 percent of the province on the Karelian Isthmus, including the cities of Viipuri and Sortavala, became part of the newly established Karelo-Finnish SSR in the Soviet Union. Following the peace treaty, the entire population of the ceded territories, more than four hundred thousand people, was evacuated to central Finland.

In 1941 the Continuation War broke out and Finland recaptured the territories, but in 1944 its forces were pushed back and by the Moscow Armistice on September 19, 1944, and the Paris Peace Treaty in 1947 the territorial losses were confirmed again.

Winter war evacuees had returned following the Finnish offensive in 1941 and were evacuated again in 1944 after the Soviet counterattack, and the territories were repopulated by people from other parts of the Soviet Union. This time, the Karelian Isthmus became part of the Vyborgsky and Priozersky districts of the Leningrad Oblast, and only Ladoga Karelia and Border Karelia became part of the Karelo-Finnish SSR.

While Ladoga Karelia retained most of its original toponyms, the vast majority of toponyms in the Karelian Isthmus were renamed by the Soviet government around 1948. In 1945 the parts of the province that remained in Finnish hands were renamed Kymi Province, with its center at Kouvola. The Kymi Province was in turn merged with other provinces into the larger Southern Finland Province in 1997.

The area had a well-developed economy due to its proximity to Saint Petersburg, the capital of the Russian Empire. In 1856 Saimaa Canal (Russian: Сайменский канал, Saymensky kanal) was opened, linking Lake Saimaa and Finnish Lakeland to the Vyborg Bay.

The development of the province was bolstered further by the construction of the Saint Petersburg–Riihimäki railroad in 1870, the Viborg–Joensuu railroad in 1894 and the Petrograd–Hiitola railroad in 1917.

Granite, marble (in Ruskeala) and bog iron mining as well as logging were important branches of industry. Starting from the beginning of the 20th century, a number of hydroelectric power plants were built by Enso in the higher reaches of the River Vuoksi to supply its pulp and paper mills.

Cities, towns and municipalities in 1939

Those which were ceded to the Soviet Union during World War II are given in italics.

Following the electoral reform to the new Parliament of Finland in 1906, the province was divided into an Eastern and a Western electoral district.