From Infogalactic: the planetary knowledge core
Jump to: navigation, search
For the 1893 conflict, see Franco-Siamese War.

Negotiations with France shortly before World War II had shown that the French government was willing to make appropriate changes in the boundaries between Thailand and French Indochina, but only slightly. Following the Fall of France in 1940, Major-General Plaek Pibulsonggram (popularly known as "Phibun"), the prime minister of Thailand, decided that France's defeat gave the Thais an even better chance to regain the territories they had lost during King Chulalongkorn's reign.

The German military occupation of a large part of France made France's hold on its overseas possessions, including Indochina, difficult. The colonial administration was now cut off from outside help and outside supplies. After the Japanese invasion of Indochina in September 1940, the French were forced to allow Japan to set up military bases. This seemingly subservient behaviour convinced the Phibun regime that France would not seriously resist a confrontation with Thailand.

The French military forces in Indochina consisted of an army of approximately 50,000 men, 12,000 of whom were French, organised into forty-one infantry battalions, two artillery regiments, and a battalion of engineers.[7] The most obvious deficiency of the French army was its shortage of armour; it could field only 20 antiquated Renault FT tanks against the nearly one hundred armoured vehicles of the Royal Thai Army. The bulk of the French forces stationed near the Thai border consisted of the Indochinese troops of the 3rd and 4th Tirailleurs Tonkinois (Tonkinese Rifles), together with a battalion of Montagnards, French regulars of the Colonial Infantry, and Foreign Legion units.[8]

The slightly larger Thai Army was a relatively well-equipped force.[10] Consisting of 60,000 men, it was made up of four armies. The largest was the Burapha Army, with five divisions. Independent formations under direct control of the army high command included two motorised cavalry battalions, one artillery battalion, one signals battalion, one engineer battalion, and one armoured regiment. The artillery was a mixture of aged Krupp and modern Bofors howitzers and field guns, while 60 machine gun-armed Carden Loyd tankettes and 30 Vickers Six-Ton light tanks made up the bulk of the army's tank force.

While nationalist demonstrations and anti-French rallies were being held in Bangkok, several border skirmishes erupted along the Mekong frontier. The superior Royal Thai Air Force then conducted daytime bombing runs over military targets in Vientiane, Phnom Penh, Sisophon, and Battambang with impunity. The French retaliated with their own air attacks, but the damage they caused was less than equal. The activities of the Thai air force, particularly in the field of dive-bombing,[11] was such that Admiral Jean Decoux, the governor of French Indochina, grudgingly remarked that the Thai planes seemed to have been flown by men with plenty of war experience.[12] 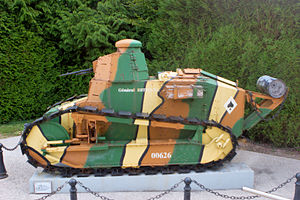 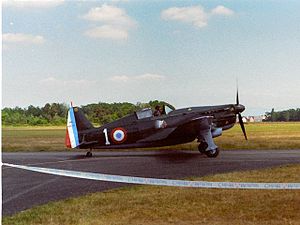 On January 5, 1941, following the report of a French attack on the Thai border town of Arayanprathet, the Thai Burapha and Isan Armies launched an offensive on Laos and Cambodia. French response was instantaneous, but many units were simply swept along by the better-equipped Thai forces. The Thai army swiftly overran Laos, but the French forces in Cambodia managed to rally and offer more resistance.[13] 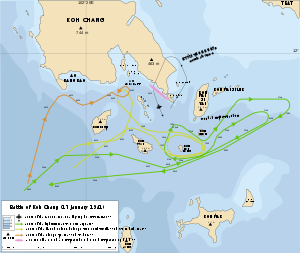 At dawn on January 16, 1941 the French launched a large counterattack on the Thai-held villages of Yang Dang Khum and Phum Preav, initiating the fiercest battle of the war. Due to poor co-ordination and non-existent intelligence against the entrenched and prepared Thai forces, the French operation was stopped and fighting ended with a French retreat from the area. However, the Thais were unable to pursue the retreating French, as their forward tanks were kept in check by the gunnery of French Foreign Legion artillery.

With the situation on land rapidly deteriorating for the French, Admiral Decoux ordered all available French naval forces into action in the Gulf of Thailand. In the early morning of January 17, the superior French fleet caught a Thai naval detachment by surprise at anchor off Ko Chang island. The subsequent battle of Ko Chang was a victory for the French and resulted in the sinking of two Thai torpedo boats and a coastal defence ship, the French suffering only minor casualties.

On January 24, the final air battle took place when Thai bombers raided the French airfield at Angkor, near Siem Reap. The last Thai mission to bombing at Phnom Penh commenced at 07:10 hours on January 28, when the Martins of the 50th Bomber Squadron set out on a raid on Sisophon, escorted by thirteen Hawk 75Ns of the 60th Fighter Squadron.[5][9]

Japan stepped in to mediate the conflict. A Japanese-sponsored "Conference for the Cessation of Hostilities" was held at Saigon and preliminary documents for a cease-fire between the governments of Marshal Philippe Pétain's France and the Kingdom of Siam were signed aboard the cruiser Natori on January 31, 1941, and a general armistice had been arranged to go into effect at 10:00 hours on January 28. On May 9 a peace treaty was signed in Tokyo,[10][11] with the French being coerced by the Japanese to relinquish their hold on the disputed border territories. France ceded the following provinces to Thailand from Cambodia: 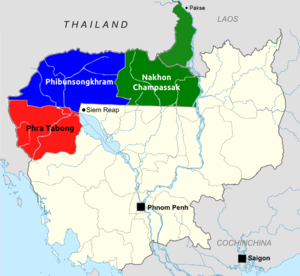 The resolution of the conflict was received with wide acclaim among the Thai people and was seen as a personal triumph for Phibun. For the first time, Thailand had been able to extract concessions from a European power, albeit a weakened one. For the French in Indochina, the conflict was a bitter reminder of their isolation following the Fall of France. In the French view, an ambitious neighbour had taken advantage of a distant colony cut off from her weakened parent. Without hope of reinforcements, the French had little chance of offering a sustained resistance.

However, the real beneficiaries of the conflict were the Japanese. They were able to expand their influence in both Thailand and Indochina. The Japanese won from Phibun a secret verbal promise to support them in an attack on British Malaya and British Burma (though he later would go back on his word).[14] On 8 December 1941, the Japanese invaded Thailand at the same time they invaded Malaya (immediately before the attack on Pearl Harbor, Hawaii, USA - because of the International Date Line, Pearl Harbor was attacked one and a half hours after Malaya and Thailand).

After the war, in October 1946, northwestern Cambodia and the two Lao enclaves on the Thai side of the Mekong River were returned to French sovereignty when the French provisional government threatened to veto Thailand's membership in the United Nations.[15] 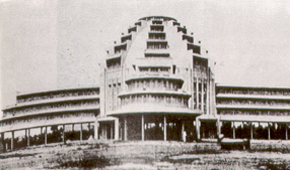 The Thai army suffered 54 men killed in action and 307 wounded.[6] 41 sailors and marines of the Thai navy were killed, and 67 wounded. At the Battle of Ko Chang, 36 men were killed, of whom 20 belonged to HTMS Thonburi, 14 to HTMS Songkhla, and 2 to HTMS Chonburi. The Thai air force lost 13 men. The number of Thai military personnel captured by the French numbered just 21.

About 30% of the French aircraft were rendered unserviceable by the end of the war, some as a result of minor damage sustained in air raids that remained unrepaired.[11] The Armée de l'Air admitted the loss of one Farman F221 and two Morane M.S.406s destroyed on the ground, but in reality its losses were greater.[9]

In its first experience of combat, the Royal Thai Air Force claimed to have shot down five French aircraft and destroyed 17 on the ground, for the loss of three of its own in the air and another five to 10 destroyed in French air raids on Thai airfields.