Voronezh (Russian: Воро́неж; IPA: [vɐˈronʲɪʂ]) is a city and the administrative center of Voronezh Oblast, Russia, Eastern Europe, located on both sides of the Voronezh River, 12 kilometers (7.5 mi) from where it flows into the Don. It is an operating center of the Southeastern Railway which connects European Russia with the Urals and Siberia, as well as the Caucasus and Ukraine. It is also the center of the M4 highway (Moscow–Voronezh–Rostov-on-Don-Novorossiysk). Its population in 2014 was estimated to be 1,014,610;[7] up from 889,680 recorded in the 2010 Census.[6]

Voronezh originates as a settlement of the Kievan Rus in about the 12th century, first mentioned in the Hypatian Codex (dated 1177). The Voronezh River is likely named for the settlement, then in the Principality of Chernigov.[14] The toponym is usually derived from a Slavic personal name Voroneg, apparently a derivation from voron "raven", [15] The comparative analysis of the name "Voronezh" was carried out by the Khovansky Foundation in 2009.[16]

Voronezh was presumably still in existence when Chernigov was absorbed into the Grand Duchy of Lithuania in the 15th century;[17] Voronezh itself was not part of the territory of the Grand Duchy, the middle Don basin, including the Voronezh river, during the 15th century formed part of the marches separating the Grand Duchies of Lithuania and Muscovy from the Golden Horde. In the 16th century, the area was gradually conquered by Muscovy from the Nogai Horde (a successor state of the Golden Horde), and the current city of Voronezh was established in 1585 by Feodor I as a fort protecting the Muravsky Trail trade route against the raids of the Nogai and Crimean Tatars.[10] 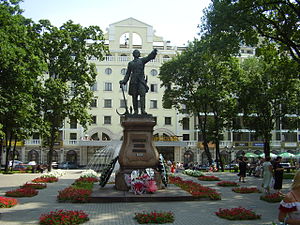 A monument to Peter the Great

Center of Voronezh at night

In the 17th century, Voronezh gradually evolved into a sizable town. Weronecz is shown on the Worona river in Resania in Joan Blaeu's map of 1645.[18] Peter the Great built a dockyard in Voronezh where the Azov Flotilla was constructed for the Azov campaigns in 1695 and 1696. This fleet, the first ever built in Russia, included the first Russian ship of the line, Goto Predestinatsia. The Orthodox diocese of Voronezh was instituted in 1682 and its first bishop, Mitrofan of Voronezh, was later proclaimed the town's patron saint. 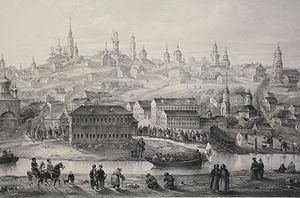 View of Voronezh in the 18th century

Owing to the Voronezh Admiralty Wharf, for a short time, Voronezh became the largest city of South Russia and the economic center of a large and fertile region. In 1711, it was made the seat of the Azov Governorate, which eventually morphed into the Voronezh Governorate.

In the 19th century, Voronezh was a center of the Central Black Earth Region. Manufacturing industry (mills, tallow-melting, butter-making, soap, leather, and other works) as well as bread, cattle, suet, and the hair trade developed in the town. A railway connected Voronezh with Rostov-on-Don in 1868 and Moscow in 1871.

During World War II, Voronezh was the scene of fierce fighting between Russian and combined Axis troops. The Germans used it as a staging area for their attack on Stalingrad, and made it a key crossing point on the Don River. In June 1941, two BM-13 (Fighting machine #13 Katyusha) artillery installations were built at the Voronezh excavator factory. In July, the construction of Katyushas was rationalized so that their manufacture became easier and the time of volley repetition was shortened from five minutes to fifteen seconds. More than 300 BM-13 units manufactured in Voronezh were used in a counterattack near Moscow in December 1941. In October 22, 1941, the advance of the German troops prompted the establishment of a defense committee in the city. On November 7, 1941, there was a troop parade, devoted to the anniversary of the October Revolution. Only three such parades were organized that year: in Moscow, Kuybyshev, and Voronezh. In late June 1942, the city was attacked by German and Hungarian forces. In response, Soviet forces formed the Voronezh Front. By July 6, the German army occupied the western river-bank suburbs before being subjected to a fierce Soviet counter-attack. The city was completely under Axis control by July 24. This was the opening move of Case Blue.

Until January 25, 1943, parts of the Second German Army and the Second Hungarian Army occupied Voronezh. During Operation Little Saturn, the Ostrogozhsk–Rossosh Offensive, and the Voronezhsko-Kastornenskoy Offensive, the Voronezh Front exacted heavy casualties on Axis forces. On January 25, 1943, Voronezh was liberated after ten days of combat. During the war the city was almost completely ruined, with 92% of all buildings destroyed.

By 1950, Voronezh was rebuilt. Most buildings and historical monuments were repaired. In 1950–1960, new factories were established: a tire factory, a machine-tool factory, a factory of heavy mechanical pressing, and others. In 1968, Serial production of the Tupolev Tu-144 supersonic plane was established at the Voronezh Aviation factory. In October 1977, the first Soviet domestic wide-body plane, Ilyushin Il-86, was built there.

In 1989, TASS published details of an alleged UFO landing in the city's park and purported encounters with extraterrestrial beings reported by a number of children. A Russian scientist that was cited in initial TASS reports later told the Associated Press that he was misquoted, cautioning, "Don't believe all you hear from TASS," and "We never gave them part of what they published",[21] and a TASS correspondent admitted the possibility that some "make-believe" had been added to the TASS story, saying, "I think there is a certain portion of truth, but it is not excluded that there is also fantasizing".[22][23]

Between 1991 and 2000, the city, suffering from high unemployment rates, became a part of the Communist-voting region known as Russia's "Red Belt".

From 10 to 17 September 2011, Voronezh celebrated its 425th anniversary. The anniversary of the city was given the status of a federal scale celebration that helped attract large investments from the federal and regional budgets for development.[25]

On December 17, 2012, Voronezh became the fifteenth city in Russia with a population of over one million people.[26]

Today Voronezh is the economic, industrial, cultural, and scientific center of the Central Black Earth Region. 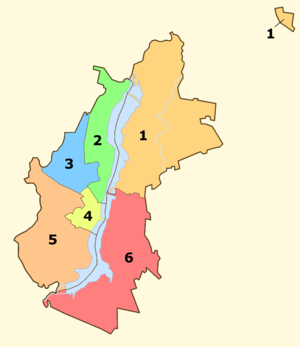 The city is divided into six administrative districts:

The leading sectors of the urban economy in the XX century were Mechanical engineering, Metalworking, Electronics industry, Food industry

In the city are such companies as: 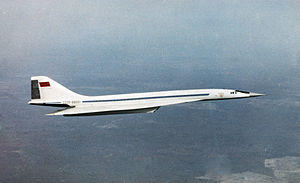 On the territory of the city district government Maslovka Voronezh region with the support of the Investment Fund of Russia is implementing a project to create an industrial park" Maslowski "to accommodate more than 100 new businesses, including transformer factory of Siemens. September 7, 2011 in Voronezh opened Global network operation center of Nokia Siemens Networks, which was the fifth in the world and first in Russia.

In clusters of tax incentives and different preferences, the full support of the authorities. A cluster of Oil and Gas Equipment, Radio-electronic cluster, Furniture cluster, IT cluster, Cluster aircraft, Cluster Electromechanics, Transport and logistics cluster, Cluster building materials and technologies.[34]

The city is served by the Voronezh International Airport, which is located north of the city and is home to Polet Airlines. Voronezh is also home to the Pridacha Airport, a part of a major aircraft manufacturing facility VASO (Voronezhskoye Aktsionernoye Samoletostroitelnoye Obshchestvo, Voronezh aircraft production association) where the Tupolev Tu-144 (known in the West as the "Concordski"), was built and the only operational unit is still stored. Voronezh also hosts the Voronezh Malshevo air force base in the southwest of the city, which, according to a Natural Resources Defense Council report, houses nuclear bombers.[citation needed]

Since 1868, there is a railway connection between Voronezh and Moscow.[35] Rail services form a part of the South Eastern Railway of the Russian Railways. Destinations served direct from Voronezh include Moscow, Kiev, Kursk, Novorossiysk, Sochi, and Tambov.

The city has seven theaters, twelve museums, a number of movie theaters, a philharmonic hall, and a circus. It is also a major center of higher education in central Russia. The main educational facilities include:

and a number of other affiliate and private-funded institutes and universities. There are 2000 schools within the city. 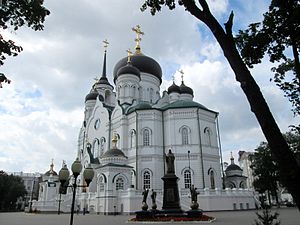 Orthodox Christianity is the prevalent religion in Voronezh.[citation needed]