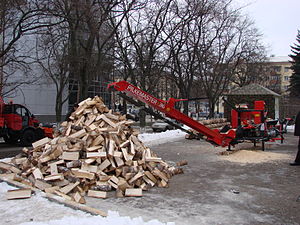 A firewood processor in Russia

A firewood processor is a machine designed to cut and split firewood with minimal manual handling of the logs. There are typically four main parts of the machine, each dedicated to a separate function. Processing begins with a log pile – a pile of logs that have been de-limbed and cut to an appropriate length, generally 10–12 feet (3.0–3.7 m). Popular brands include DYNA, Multitek and Blockbuster.

Logs are stacked onto the log deck using a machine such as a skid steer or small excavator with a grapple. Each log is pulled mechanically into a trough that feeds it into position to be sawn into firewood-length pieces (often called “rounds”).

The log is sawn by either a hydraulically operated chainsaw harvester bar, or on larger machines, a very large circular saw blade (slasher saw), or a guillotine powered either directly from a pto (tractor or engine powered) or by hydraulics. When the cut is completed, the "round" drops into position to be split in the next process. In some guillotine splitters the wood is split as the wood is cut.

Here, the log is simply forced into a wedge that splits the round into anywhere between two and ten pieces, depending on the size of the logs and the intended market.

Typically a conveyor that pulls the split firewood away from the processor and into a waiting delivery truck’s box or a woodpile for later handling. Some setups will use multiple conveyors and introduce a tumbling system to clean the firewood.

The choice of machine depends on a large number of variables other than straight production output. Different markets require different processing. For example, people who heat with large outside wood boilers prefer large, slow-burning pieces of hardwood, while a good campfire is made of small pieces of fast-burning softwood. Restaurants with wood-fired ovens prefer small pieces as well, but of hardwood or specialty species.

Misconceptions and areas of confusion

The physics of the process demand that it requires a larger machine to make smaller pieces of firewood, and the species of logs being processed may also dictate machine size and power requirements.

Every manufacturer lists an output rating of cords per hour. Even the lightest-duty machines will split two cords of green, frozen 8 in (20 cm) Aspen into halves 16 in (41 cm) long quickly. Changing any one of these optimal variables (condition, temperature, size, species, number of splits, or length of round) will reduce the rate of output, making meaningful comparison between manufacturers' claims difficult.

This term is frequently misunderstood. While the definition is understood to be the time it takes the splitter ram to fully extend and retract, there is no consideration of force in this equation. In proper terms, cycle time is simply a mathematical calculation of the size of a cylinder’s bore, stroke and rod diameter, and the ability of that combination to act at a given flow of hydraulic oil in GPM.

There are a number of ways to ensure a hydraulic system allows a cylinder to operate at the rated speed, such as the introduction of a regeneration valve, but there is no way to increase cycle time without sacrificing force other than changing the physical dimensiions of the cylinder.[1]

While most processors use a hydraulic chainsaw bar to cut the logs to length, some use a very large circular saw blade called a slasher blade. They are fast and efficient, requiring little maintenance once set up properly. While the safety of slasher blades has been proven over decades, there are a number of people who will not walk within 50 feet (15 m) of one. The more traditional chainsaw bar setup requires constant oiling and frequent maintenance, but it is simple and familiar work.

The reduction in manual labor is obvious, but few immediately recognize the improvement in safety conditions. Everything related to logging is dangerous, but eliminating a great deal of the need for workers to use chainsaws or wrestle heavy rounds onto a splitter measurably reduces the incidence of injury on these job sites. The fact that it takes fewer workers to produce the same amount of firewood further reduces these risks.