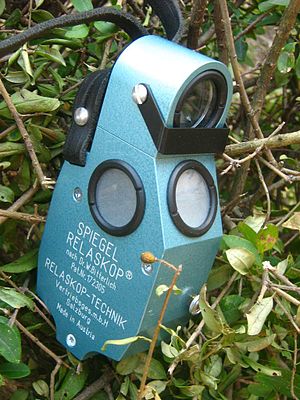 The relascope, invented by Walter Bitterlich, is a multi-use instrument for forest inventory. It is primarily used to find height of a tree, basal area of a tree and diameter of a tree anywhere along the bole. This instrument is used mostly for applications involving variable radius sample plots in a forest survey.

The relascope has a sight hole on the back and a clear window at the front to allow the user to sight through the tool. There are three light inlet holes which are used to light the scale. This is one of the major problem with the relascope, the way this instrument is designed it cannot be used when light is at a minimum.[1] This is not a problem in a similar piece of equipment called the tele-relascope. This instrument differs from the relascope in that the tele-relascope is an electronic laser based version.

The Relascope is used by looking through the hole in the front of the instrument. When one looks through this hole they will see several scales that are used for different measurements on the bottom half of ones view and on the top half one will see the tree that they are looking at. There are three scales for height of the tree used depending on the distance one is from the tree, five scales for diameter and two scales for basal area used depending on desired basal area factor.[1]

The Relascope is very similar to the angle gauge and the wedge prism in that it can be used to find the basal area of a tree from a point depending on the basal area factor in a variable radius sampling method. The main difference in this instrument though is that it has multiple uses as described previously. Some other advantages over similar devises in that it accounts for the slope one is from the tree giving a more accurate measurement than similar tools.[2]

The Relascope can also be used to find the distance from a tree (range). This is done in the same manner as when one uses a transit using a set of trigonometric formulae based on height and angle. The Relascope is not commonly used for this because of its difficulty and the amount of time it takes to do this.[1]

Tree height is another use of this instrument. It does this by using several weighted wheels that spin based on the position of the instrument. The readings off of this scale will give the height of the tree based on your position from the tree. When taking height one measures either 66 or 120 feet from the tree this is the reason for the multiple scales in the relascope. When one stands at this distance they look first at the top of the tree or at the highest point on the bole that they want to measure and record the number from the height dial inside the scope, then one looks at the bottom of the tree this will give you a positive or negative number you take this number and subtract it from the first number one recorded this is ones height of the tree. This is very similar to the way a clinometer is used.[1]

The Relascope is often used for point sampling. This is done by using the set spacing marked in the Relascope to gauge whether a tree is in or out of the stand. When one says the tree is IN or OUT they mean does it fill the space between the lines on the scale in the Relascope if it does than this tree is IN if it doesn't than this tree is OUT (Figure 1). If the tree is IN this means that it is counted as basal area within ones plot. To figure out what this trees basal area is all one has to do is multiply the number of trees by the basal area factor which is based on the width of ones gauge.[2]