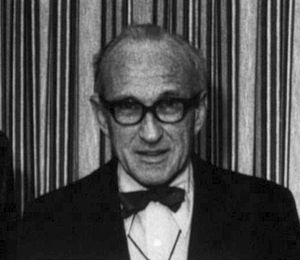 Elvin Abraham Kabat (September 1, 1914 – June 16, 2000) was an American biomedical scientist and one of the founding fathers of modern quantitative immunochemistry. In 1977, Kabat was awarded the Louisa Gross Horwitz Prize from Columbia University in 1977 and the National Medal of Science in 1991. He is the father of Jon Kabat-Zinn, the founding director of the Stress Reduction Clinic and the Center for Mindfulness in Medicine, Health Care, and Society at the University of Massachusetts Medical School. He was the president of the American Association of Immunologists from 1965 to 1966, a member of the National Academy of Sciences and a fellow of the American Academy of Arts and Sciences.

Kabat was instrumental in the discovery of the structural and genetic basis for the remarkable specificity of antibodies. Kabat first demonstrated that antibodies are gamma globulins. He characterized the size and stunning heterogeneity of antibody-combining sites. Kabat and his coworkers determined the structures of the major blood group antigens, the embryonic-stage-specific carbohydrate antigens and the carbohydrate markers of leukocyte (white blood cell).

Kabat’s parents arrived in the United States from Eastern Europe toward the end of the 19th century. (The family changed their last name from Kabatchnick to Kabat.) Elvin began high school in New York at the age of 12 and completed it in three years. He started at City College of New York at the age of 15 and graduated in 1932 with a major in chemistry at age 18. In January 1933, Kabat was already working in Michael Heidelberger’s laboratory doing routine lab chores at Columbia University College of Physicians and Surgeons. Kabat started work on his Ph.D. in the Department of Biochemistry, taking most courses at night, and completed his Ph.D. under Heidelberger in only four years.

Kabat did postdoctoral work with Arne Tiselius and Kai Pederson in Uppsala, Sweden, to learn the new methods of ultracentrifugation and electrophoresis. He returned to New York City to take up a position as an instructor of pathology at Cornell University Medical College, served for three years before moving uptown and spent the main part of his career at Columbia University.

In 1942 Kabat married Sally Lennick, a young Canadian art student and they had three sons.