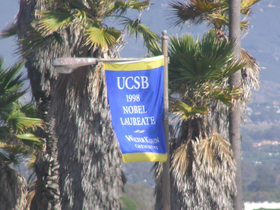 A banner on a lightpole at the University of California, Santa Barbara, commemorating Walter Kohn being awarded the Nobel Prize in Chemistry in 1998.

Walter Kohn (born March 9, 1923) is an Austrian-born American theoretical physicist. He was awarded, with John Pople, the Nobel Prize in chemistry in 1998.[3] The award recognized their contributions to the understandings of the electronic properties of materials. In particular, Kohn played the leading role in the development of density functional theory, which made it possible to incorporate quantum mechanical effects in the electronic density (rather than through its many-body wavefunction). This computational simplification led to many insights and became an essential tool for electronic materials, atomic and molecular structure.

Kohn arrived in England as part of the famous Kindertransport rescue operation, immediately after the annexation of Austria by Hitler. He is from a Jewish family, and has written, "My feelings towards Austria, my native land, are – and will remain – very painful. They are dominated by my vivid recollections of 1 1/2 years as a Jewish boy under the Austrian Nazi regime, and by the subsequent murder of my parents, Salomon and Gittel Kohn, of other relatives and several teachers, during the Holocaust. ... I want to mention that I have a strong Jewish identity and – over the years – have been involved in several Jewish projects, such as the establishment of a strong program of Judaic Studies at the University of California in San Diego."[4]

Because he was a German national, he was sent to Canada by the English in July 1940. As a 17-year-old, Kohn traveled as part of a British convoy moving through U-boat-infested waters to Quebec City in Canada; and from there, by train, to a camp in Trois-Rivières. He was at first held in detention in a camp near Sherbrooke, Quebec. This camp, as well as others, provided a small number of educational facilities that Kohn used to the fullest, and he finally succeeded in entering the University of Toronto. As a German national, the future Nobel laureate in chemistry was not allowed to enter the chemistry building, and so he opted for physics and mathematics. A short autobiography may be found on the Nobelist webpage.[4]

Kohn received a war-time bachelor's degree in applied mathematics at the end of his one-year army service, having completed only 2½ out of the 4-year undergraduate program, from the University of Toronto in 1945; he was awarded an M.A. degree in applied mathematics by Toronto in 1946. Kohn was awarded a Ph.D. degree in physics by Harvard University in 1948, where he worked under Julian Schwinger on the three-body scattering problem. At Harvard he also fell under the influence of Van Vleck and solid state physics.

He moved from Harvard to Carnegie Mellon University from 1950 to 1960, after a short stint in Copenhagen as a National Research Council of Canada post-doctoral fellow. At Carnegie Mellon he did much of his seminal work on multiple-scattering band-structure work, now known as the KKR method. His association with Bell Labs got him involved with semiconductor physics, and produced a long and fruitful collaboration with Luttinger (including, for example, development of the Luttinger-Kohn model of semiconductor band structure). In 1960 he moved to the newly founded University of California, San Diego, held a term as the physics department chair,[5] and remained until 1979. He then accepted the Founding Director's position at the new Institute for Theoretical Physics in Santa Barbara. He took his present position as a professor in the Physics Department at the University of California at Santa Barbara in 1984; he is currently professor emeritus and research professor.

Kohn made significant contributions to semiconductor physics, which led to his award of the Oliver E. Buckley Prize by the American Physical Society. He was also awarded the Feenburg medal for his contributions to the many-body problem. His work on density functional theory was initiated during a visit to the École Normale Supérieure in Paris, with Pierre Hohenberg, and was prompted by a consideration of alloy theory. The Hohenberg-Kohn theorem was further developed, in collaboration with Lu Jeu Sham, to produce the Kohn-Sham equations. The latter is the standard work horse of modern materials science,[6] and even used in quantum theories of plasmas.[6] In 2004, a study of all citations to the Physical Review  journals from 1893 until 2003, found Kohn to be an author of five of the 100 papers with the "highest citation impact", including the first two.[7]

Scientist with a great following 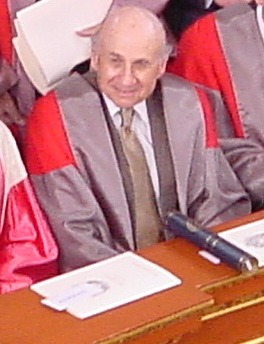 Walter Kohn receiving an honorary doctorate at The University of Oxford

Walter Kohn is a well-known and much-loved figure on many European campuses. He was a regular visitor to Jacques Friedel's laboratory (Laboratory of Solid State Physics) and Carl Moser's laboratory (CECAM) in Orsay, Université Paris Sud. Another favorite stop for Kohn is in Switzerland, at the ETH. He also visits the National Research Council of Canada, his Canadian Alma Mater the University of Toronto, Montreal, and Sherbrooke whenever his itineraries permit him to do so. He is equally at home in Denmark, Israel, England or France. He has students in virtually every part of the world.

In 1957, he relinquished his Canadian citizenship and became a naturalized citizen of the United States.