Ryōji Noyori (野依 良治, Noyori Ryōji?, born September 3, 1938) is a Japanese chemist. He won the Nobel Prize in Chemistry in 2001. Noyori shared half of the prize with William S. Knowles for the study of chirally catalyzed hydrogenations; the second half of the prize went to K. Barry Sharpless for his study in chirally catalyzed oxidation reactions (Sharpless epoxidation).[2][3][4][5][6][7][8]

Ryōji Noyori was born in Kobe, Japan. He became fascinated with chemistry at age twelve, after hearing a presentation on nylon. He saw the power of chemistry as being the ability to "produce high value from almost nothing". He was a student at Kyoto University, an instructor in the research group of Hitoshi Nozaki, and an associate professor at Nagoya University. After postdoctoral work with Elias J. Corey at Harvard he returned to Nagoya, becoming a full professor in 1972. He is still based at Nagoya, and served as president of RIKEN, a multi-site national research initiative with an annual budget of $800 million, from 2003 to 2015.[9] 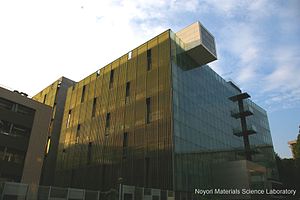 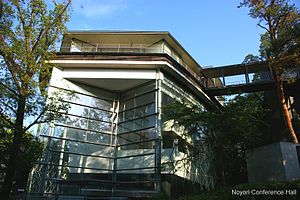 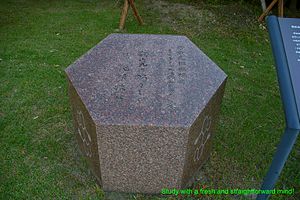 Study with a fresh and straightforward mind!
(in Nagoya University)

Noyori believes strongly in the power of catalysis and of green chemistry; in a recent article he argues for the pursuit of "practical elegance in synthesis".[10] In this article he states that "our ability to devise straightforward and practical chemical syntheses is indispensable to the survival of our species." Elsewhere he has said that "Research is for nations and mankind, not for researchers themselves." He encourages scientists to be politically active: "Researchers must spur public opinions and government policies toward constructing the sustainable society in the 21st century."[11]

Noyori is currently a chairman of the Education Rebuilding Council, which was set up by Japan's PM Shinzō Abe after he came to power in 2006.[12]

He has also worked on other asymmetric processes. Each year 3000 tonnes (after new expansion) of menthol are produced (in 94% ee) by Takasago International Corporation, using Noyori's method for isomerisation of allylic amines.[13]

More recently with Philip J. Jessop, Nyori has developed an industrial process for the manufacture of N,N-dimethylformamide from hydrogen, dimethylamine and supercritical carbon dioxide in the presence of RuCl2(PMe3)4 as catalyst.[14]

The Ryoji Noyori Prize is named in his honour. In 2000 Noyori became Honorary Doctor at the University of Rennes 1, where he taught in 1995,[15] and in 2005, he became Honorary Doctor at Technical University of Munich and RWTH Aachen University, Germany. Noyori was elected a Foreign Member of the Royal Society (ForMemRS) in 2005.[1] He has also been awarded the Asahi Prize in 1992, the Tetrahedron Prize in 1993, the Arthur C. Cope Award in 1997, the Wolf Prize in Chemistry in 2001 and the Lomonosov Gold Medal in 2009.