Norbert Wiener (November 26, 1894 – March 18, 1964) was an American mathematician and philosopher. He was professor of mathematics at MIT.

Wiener is considered the originator of cybernetics, a formalization of the notion of feedback, with implications for engineering, systems control, computer science, biology, neuroscience, philosophy, and the organization of society.

Wiener was born in Columbia, Missouri, the first child of Leo Wiener and Bertha Kahn, Jews[1] of Polish and German origin, respectively. Leo had educated Norbert at home until 1903, employing teaching methods of his own invention, except for a brief interlude when Norbert was seven years of age. Earning his living teaching German and Slavic languages, Leo read widely and accumulated a personal library from which the young Norbert benefited greatly. Leo also had ample ability in mathematics and tutored his son in the subject until he left home. In his autobiography, Norbert described his father as calm and patient, unless he (Norbert) failed to give a correct answer, at which his father would lose his temper.

He became an agnostic.[2]

After graduating from Ayer High School in 1906 at 11 years of age, Wiener entered Tufts College. He was awarded a BA in mathematics in 1909 at the age of 14, whereupon he began graduate studies of zoology at Harvard. In 1910 he transferred to Cornell to study philosophy.

Harvard and World War I

The next year he returned to Harvard, while still continuing his philosophical studies. Back at Harvard, Wiener became influenced by Edward Vermilye Huntington, whose mathematical interests ranged from axiomatic foundations to engineering problems. Harvard awarded Wiener a Ph.D. in 1912, when he was merely 17 years old, for a dissertation on mathematical logic, supervised by Karl Schmidt, the essential results of which were published as Wiener (1914). In that dissertation, he was the first to state publicly that ordered pairs can be defined in terms of elementary set theory. Hence relations can be defined by set theory, thus the theory of relations does not require any axioms or primitive notions distinct from those of set theory. In 1921, Kazimierz Kuratowski proposed a simplification of Wiener's definition of ordered pairs, and that simplification has been in common use ever since. It is (x, y) = {{x}, {x, y}}.

In 1914, Wiener traveled to Europe, to be taught by Bertrand Russell and G. H. Hardy at Cambridge University, and by David Hilbert and Edmund Landau at the University of Göttingen. During 1915–16, he taught philosophy at Harvard, then was an engineer for General Electric and wrote for the Encyclopedia Americana. Wiener was briefly a journalist for the Boston Herald, where he wrote a feature story on the poor labor conditions for mill workers in Lawrence, Massachusetts, but he was fired soon afterwards for his reluctance to write favorable articles about a politician the newspaper's owners sought to promote.[3]

Although Wiener eventually became a staunch pacifist, he eagerly contributed to the war effort in World War I. In 1916, with America's entry into the war drawing closer, Wiener attended a training camp for potential military officers, but failed to earn a commission. One year later Wiener again tried to join the military, but the government again rejected him due to his poor eyesight. In the summer of 1918, Oswald Veblen invited Wiener to work on ballistics at the Aberdeen Proving Ground in Maryland.[4] Living and working with other mathematicians strengthened his interest in mathematics. However, Wiener was still eager to serve in uniform, and decided to make one more attempt to enlist, this time as a common soldier. Wiener wrote in a letter to his parents, "I should consider myself a pretty cheap kind of a swine if I were willing to be an officer but unwilling to be a soldier."[5] This time the army accepted Wiener into its ranks and assigned him, by coincidence, to a unit stationed at Aberdeen, Maryland. World War I ended just days after Wiener's return to Aberdeen and Wiener was discharged from the military in February 1919.[6] 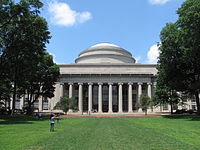 Norbert Wiener was regarded as a semi-legendary figure at MIT

Wiener was unable to secure a permanent position at Harvard, a situation he blamed largely on anti-semitism at the university and in particular on the antipathy of Harvard mathematician G. D. Birkhoff.[7] He was also rejected for a position at the University of Melbourne. At W. F. Osgood's suggestion, Wiener became an instructor of mathematics at MIT, where he spent the remainder of his career, becoming promoted eventually to Professor. There is a photograph of him prominently displayed in one of the hallways, often used in giving directions.

In 1926, Wiener returned to Europe as a Guggenheim scholar. He spent most of his time at Göttingen and with Hardy at Cambridge, working on Brownian motion, the Fourier integral, Dirichlet's problem, harmonic analysis, and the Tauberian theorems.

Many tales, perhaps apocryphal, were told of him at MIT, especially concerning his absent-mindedness. It was said that he returned home once to find his house empty. He inquired of a neighborhood girl the reason, and she said that the family had moved elsewhere that day. He thanked her for the information and she replied, "That's why I stayed behind, Daddy!"[9]

During and after World War II

During World War II, his work on the automatic aiming and firing of anti-aircraft guns caused Wiener to investigate information theory independently of Claude Shannon and to invent the Wiener filter. (To him is due the now standard practice of modeling an information source as a random process—in other words, as a variety of noise.) His anti-aircraft work eventually led him to formulate cybernetics.[10] After the war, his fame helped MIT to recruit a research team in cognitive science, composed of researchers in neuropsychology and the mathematics and biophysics of the nervous system, including Warren Sturgis McCulloch and Walter Pitts. These men later made pioneering contributions to computer science and artificial intelligence. Soon after the group was formed, Wiener suddenly ended all contact with its members, mystifying his colleagues. This emotionally traumatized Walter Pitts, and led to his career decline. In their biography of Wiener, Conway and Siegelman suggest that Wiener's wife Margaret, who detested McCulloch's bohemian lifestyle, engineered the breach.[11]

Wiener later helped develop the theories of cybernetics, robotics, computer control, and automation. He discussed the modeling of neurons with John von Neumann, and in a letter from November 1946 von Neumann presented his thoughts in advance of a meeting with Wiener.[12]

Wiener always shared his theories and findings with other researchers, and credited the contributions of others. These included Soviet researchers and their findings. Wiener's acquaintance with them caused him to be regarded with suspicion during the Cold War. He was a strong advocate of automation to improve the standard of living, and to end economic underdevelopment. His ideas became influential in India, whose government he advised during the 1950s.

After the war, Wiener became increasingly concerned with what he believed was political interference with scientific research, and the militarization of science. His article "A Scientist Rebels" for the January 1947 issue of The Atlantic Monthly[13] urged scientists to consider the ethical implications of their work. After the war, he refused to accept any government funding or to work on military projects. The way Wiener's beliefs concerning nuclear weapons and the Cold War contrasted with those of John von Neumann is the major theme of the book John Von Neumann and Norbert Wiener.[14][citation needed]

Wiener was a participant of the Macy conferences. He died, aged 69, in Stockholm, Sweden.

Information is information, not matter or energy.

— Norbert Wiener, Cybernetics: Or the Control and Communication in the Animal and the Machine

Wiener is regarded as the originator of cybernetics, a formalization of the notion of feedback, with many implications for engineering, systems control, computer science, biology, philosophy, and the organization of society.

Wiener's work with cybernetics influenced Gregory Bateson and Margaret Mead, and through them, anthropology, sociology, and education.[17] 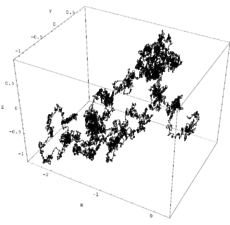 In the mathematical field of probability, the "Wiener sausage" is a neighborhood of the trace of a Brownian motion up to a time t, given by taking all points within a fixed distance of Brownian motion. It can be visualized as a cylinder of fixed radius the centerline of which is Brownian motion.

A simple mathematical representation of Brownian motion, the Wiener equation, named after Wiener, assumes the current velocity of a fluid particle fluctuates randomly.

For signal processing, the Wiener filter is a filter proposed by Wiener during the 1940s and published in 1949. Its purpose is to reduce the amount of noise present in a signal by comparison with an estimation of the desired noiseless signal.

Wiener took a great interest in the mathematical theory of Brownian motion (named after Robert Brown) proving many results now widely known such as the non-differentiability of the paths. Consequently, the one-dimensional version of Brownian motion was named the Wiener process. It is the best known of the Lévy processes, càdlàg stochastic processes with stationary statistically independent increments, and occurs frequently in pure and applied mathematics, physics and economics (e.g. on the stock-market).

Wiener's Tauberian theorem, a 1932 result of Wiener, developed Tauberian theorems in summability theory, on the face of it a chapter of real analysis, by showing that most of the known results could be encapsulated in a principle taken from harmonic analysis. In its present formulation, the theorem of Wiener does not have any obvious association with Tauberian theorems, which deal with infinite series; the translation from results formulated for integrals, or using the language of functional analysis and Banach algebras, is however a relatively routine process.

The Paley–Wiener theorem relates growth properties of entire functions on Cn and Fourier transformation of Schwartz distributions of compact support.

The Wiener–Khinchin theorem, (or Wiener – Khintchine theorem or Khinchin – Kolmogorov theorem), states that the power spectral density of a wide-sense-stationary random process is the Fourier transform of the corresponding autocorrelation function.

An abstract Wiener space is a mathematical object in measure theory, used to construct a "decent", strictly positive and locally finite measure on an infinite-dimensional vector space. Wiener's original construction only applied to the space of real-valued continuous paths on the unit interval, known as classical Wiener space. Leonard Gross provided the generalization to the case of a general separable Banach space.

The notion of a Banach space itself was discovered independently by both Wiener and Stefan Banach at around the same time.[18]

The Norbert Wiener Center for Harmonic Analysis and Applications (NWC) in the Department of Mathematics at the University of Maryland, College Park is devoted to the scientific and mathematical legacy of Norbert Wiener. The NWC website highlights the research activities of the Center. Further, each year the Norbert Wiener Center hosts the February Fourier Talks, a two-day national conference displaying advances in pure and applied harmonic analysis in industry, government, and academia.

Wiener wrote many books and hundreds of articles:[19]

Under the name "W. Norbert":

A brief profile of Dr. Wiener is given in The Observer newspaper, Sunday, 28 January 1951.

Corinne Jacker, Man, Memory, and Machines: an Introduction to Cybernetics, 1964