M. Frederick Hawthorne is an inorganic chemist who has made contributions to the chemistry of boron hydrides, especially their clusters.

Hawthorne received his elementary and secondary education in Kansas and Missouri. Prior to high school graduation, through examination he entered the Missouri School of Mines and Metallurgy, Rolla, Missouri as a chemical engineering student. He then transferred to Pomona College, where he received a B.A. degree in chemistry. While there he conducted research with Corwin Hansch. Hawthorne pursued his PhD in organic chemistry under Donald Cram at the University of California, Los Angeles. He conducted postdoctoral research at Iowa State University before joining the Redstone Arsenal Research Division of the Rohm and Haas Company in Huntsville, Alabama.

At the Redstone Arsenal, he worked on the chemistry of boron hydrides making several notable discoveries. In 1962, he moved to the University of California, Riverside as professor of chemistry. He transferred to the Los Angeles campus in 1969. In 1998 he was appointed University Professor of Chemistry at UCLA. He then returned to his home state of Missouri as head of the International Institute of Nano and Molecular Medicine at University of Missouri.

Hawthorne was long associated with the journal Inorganic Chemistry, being the longest serving editor-in-chief. 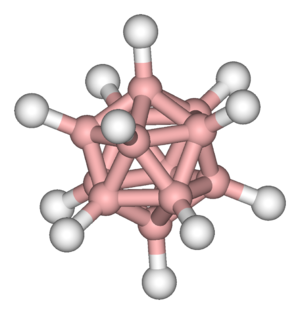 Hawthorne's contributions focused on the chemistry of boron hydride clusters. He discovered dodecaborate anion (B12H122−)[1] and metal complexes of the dicarbollide anion.[2] His group subsequently discovered the perhydroxylation of B12H122−.[3]

Hawthorne has been widely recognized, including election to the US National Academy of Sciences.