Leroy Hood is an American biologist. He is president and co-founder of the Institute for Systems Biology.

The inventions developed under his leadership include the automated DNA sequencer and an automated tool for synthesizing DNA.

Leroy Hood was born on October 10, 1938 in Missoula, Montana. As a high school student he excelled in math and science, winning the Westinghouse Science Talent Search.[1]

Hood received his undergraduate education from the California Institute of Technology, where he had teachers such as Richard Feynman and Linus Pauling.[1] Hood received an M.D. from Johns Hopkins School of Medicine in 1964 and a Ph.D. from Caltech in 1968, where he returned to be a faculty member for 22 years.

Dr Hood and his colleagues at Caltech created the technological foundation for the sciences of genomics (study of genomes) and proteomics (study of proteins) by fostering the development of five groundbreaking instruments (the protein sequencer, the protein synthesizer, the DNA synthesizer, the automated DNA sequencer and (later) the ink-jet DNA synthesizer) and by elucidating the potentialities of genome and proteome research into the future through his pioneering of the fields of systems biology and systems medicine. Hood's instruments not only helped pioneer the deciphering of biological information, but also introduced the concept of high throughput data accumulation through automation and parallelization of protein and DNA chemistries.

The protein sequencer and automated peptide synthesizer helped create the field of proteomics. The protein sequencer allowed scientists to determine partial amino acid sequences of proteins that had not previously been accessible, resulting in the characterization of a series of new proteins whose genes could then be cloned and analyzed. These discoveries led to significant ramifications for biology, medicine, and pharmacology. The automated peptide synthesizer allowed for the synthetic synthesis of peptides and small proteins in sufficient quantities to begin characterizing their functions.

Revolutionizing the field of molecular biology, the DNA synthesizer developed by Marv Caruthers allowed biologist to synthesize DNA fragments for cloning and other genetic manipulations, The DNA synthesizer played a critical role in the identification of many important genes and in the discovery of the polymerase chain reaction (PCR), the critical technique that allow any segment of DNA to be amplified a million-fold. The most notable of Hood’s inventions, the automated DNA sequencer developed in 1986 in collaboration with Applied Biosystems, made possible high-speed sequencing of human genomes and was the key technology enabling the Human Genome Project.

In the early 1990s Hood and his colleagues, now at the University of Washington, developed the ink-jet DNA synthesis technology for creating DNA arrays with tens of thousands of gene fragments. The ink-jet DNA synthesizer created one of the first DNA array chips, which enabled measuring of expression levels of 10,000s of genes. This instrument has transformed genomics, biology, and medicine.

Hood also made seminal discoveries in the field of molecular immunology. His studies of the amino acid sequences of immunoglobulins (also known as antibodies) helped to fuel the 1970s’ debate regarding the generation of immune diversity and supported the hypothesis advanced by Bill Dreyer that immunoglobulin (antibody) chains are encoded by two separate genes (a constant and a variable gene). He (and others) conducted pioneering studies on the structure and diversity of the antibody genes. This research led to verification of the “two genes, one polypeptide” hypothesis and insights into the mechanisms responsible for the diversification of the immunoglobulin variable genes. Hood shared the Lasker Award in 1987 for these studies.

Additionally, Hood was among the first to study, at the gene level, the MHC (major histocompatibility complex) gene family and the T-cell receptor gene families as well as the being among first to demonstrate that alternative RNA splicing was a fundamental mechanism for generating alternative forms of antibodies. He showed that RNA splicing is the mechanism for generating the membrane bound and the secreted forms of antibodies.

In neurobiology, Hood and his colleagues were the first researcher to clone and study the myelin basic protein (MBP) gene. The MBP is a central component in the sheath that wraps and protects neurons. He demonstrated that disease called “shiverer mouse” arose from a defect in the MBP gene. Hood’s research group corrected the neurological defect in mice (the shiverer defect) by transferring a normal MBP gene into the fertilized egg of the shiverer mouse. These discoveries led to extensive studies of MBP and its biology.

In the 1990s, Hood began to focus more on cross-disciplinary biology and systems biology. In 1992, with support from Bill Gates, he moved to the University of Washington, where he was the founder and chairman of the Molecular Biotechnology Department, the first cross-disciplinary biology department. In 2000, he co-founded, and is still president of, the Institute for Systems Biology (ISB) in Seattle, Washington, an independent, nonprofit organization that develops strategies and technologies for systems approaches to biology and medicine. Dr Hood pioneered the systems biology concept of looking at human biology as a “network of networks.” In this model, to understand how systems functions, one needs to know (1) all the components of each network (including genetic, molecular, cellular, organ networks), (2) how these networks inter and intra-connect, (3) how the networks change over time and with perturbations, and (4) how function is achieved within these networks. At the ISB under Hood’s direction, genomic, transcriptomic, metabolomic and proteomic technologies are used to understand the “network of networks” and are focused on diverse biological systems (e.g. yeast, mice and humans).

After the founding of the Institute for Systems Biology, Hood began exploring the idea of systems medicine (the application systems biology to study disease), specifically focusing on cancer and neurodegeneration in mice and humans. His paper on a systems approach to prion disease in 2009 was one of the first to thoroughly explore the use of systems biology to interrogate the dynamic network changes in disease models. These studies are the first to explain the dynamics of diseased-perturbed networks and have now expanded to include frontal temporal dementia and Huntington's disease. Hood is also studying glioblastoma in mice and humans from the systems viewpoint. Dr Hood has established several practices in the burgeoning field of systems medicine:

In 2002 Hood began progressing in his vision of the future of medicine: first focusing on predictive and preventive (2P) Medicine, then predictive, preventive and personalized (3P) Medicine and finally predictive, preventive, personalized and participatory which led to the current concept of P4 Medicine. Hood states that P4 Medicine is the convergence of systems medicine (see above), big data and patient (consumer) driven healthcare and social networks.

Hood’s vision is that in 10 years each individual will be surrounded by a virtual cloud of billions of data points and that we will have the computational tools to analyze this data and produce simple hypotheses about how to optimize wellness and minimize disease for each individual. The patient’s demand for better healthcare will be the real driving force for the acceptance of P4 Medicine by the medical community. This driving force is exemplified by the movement known as the quantified self, which used digital devices to monitor self-parameters such as weight, activity, sleep, diet, etc. His view is that P4 Medicine will transform the practice of medicine over the next decade, moving it from a largely reactive, disease-care to a proactive P4 approach that is predictive, preventive, personalized and participatory.

The promise of Predictive, Preventive, Personalized and Participatory (P4) Medicine led Dr Hood in 2010 to co-found the P4 Medicine institute (P4Mi), dedicated to bringing P4 Medicine to society. Through demonstration projects integrating systems biology, consumer driven healthcare management and the current healthcare institutions the P4Mi is introducing a new healthcare system to society. His view is that P4 Medicine will improve healthcare, decrease the cost of healthcare and promote innovation.

Dr Hood went to the Immunology Branch of the National Cancer Institute at NIH in 1967 as a Senior Investigator. In 1970 he moved to Caltech as an Assistant Professor. He was promoted to Bowles Professor of Biology in 1975 and Chairman of the Division of Biology in 1980—when he also took on the Directorship of Caltech’s Special Cancer Center. In 1989 he stepped down as Chairman to assume the Directorship of a newly awarded NSF Science and Technology Center for Molecular Biotechnology. In 1992 Hood moved to the University of Washington Medical School to Found and Chair the newly created Department of Molecular Biotechnology (the first cross-disciplinary biology department). In 2000 Hood resigned from the University of Washington to co-found and lead (as President) the non-profit Institute for Systems Biology (the first systems biology organization). Hood is an adjunct Professor at the University of Washington in Computer Science, Bioengineering and Immunology. In 2010 he co-founded the non-profit P4 Medicine institute—an organization dedicated to bringing P4 medicine to patients and the healthcare system. 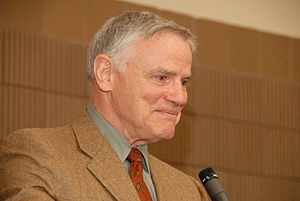 Dr Hood shared the Lasker Prize in 1987 (for studies of the mechanism of immune diversity); the 2002 Kyoto Prize in Advanced Technology (for developing automated technologies for analyzing proteins and genes); the 2003 Lemelson–MIT Prize for Innovation and Invention (for the development of the DNA sequencer); the 2004 Biotechnology Heritage Award;[2][3] the 2006 Heinz Award in Technology, the Economy and Employment (for breakthroughs in biomedical science on the genetic level); membership in the 2007 Inventors Hall of Fame (for the automated DNA sequencer); the 2008 Pittcon Heritage Award (for helping to transform the biotechnology industry); and the 2010 Kistler Award (for contributions to genetics that have benefited mankind); the 2011 Russ Prize for automating DNA sequencing, which has revolutionized biomedicine and forensic science; and the 2011 National Medal of Science, presented at a White House ceremony by President Obama in early 2013.

He has received 17 honorary degrees from institutions such as Johns Hopkins, Yale and UCLA. He has published more than 700 peer-reviewed papers, received 36 patents, and co-authored textbooks in biochemistry, immunology, molecular biology, and genetics. In addition, he co-authored, with Dan Keveles, The Code of Codes, a popular book on the sequencing of the human genome. He is currently in the process of finishing a textbook on Systems Biology.

He has been instrumental in founding 13 biotechnology companies, including Amgen, Applied Biosystems, Systemix, Darwin, Rosetta, Integrated Diagnostics, and Accelerator Corporation.

Leroy Hood won the 2011 Fritz J. and Dolores H. Russ Prize “for automating DNA sequencing that revolutionized biomedicine and forensic science” and the 2003 Lemelson-MIT Prize for inventing "four instruments that have unlocked much of the mystery of human biology" by helping decode the genome.[4] Hood also won the 2002 Kyoto Prize for Advanced Technology, and the 1987 Albert Lasker Award for Basic Medical Research.