Susan Solomon (born 1956 in Chicago)[1] is an atmospheric chemist, working for most of her career at the National Oceanic and Atmospheric Administration.[2] In 2011, Solomon joined the faculty at the Massachusetts Institute of Technology, where she serves as the Ellen Swallow Richards Professor of Atmospheric Chemistry & Climate Science.[3] Solomon, with her colleagues, was the first to propose the chlorofluorocarbon free radical reaction mechanism that is the cause of the Antarctic ozone hole.[2]

Solomon's interest in science began as a child watching The Undersea World of Jacques Cousteau.[1] In high school she placed third in a national science fair, with a project that measured the percent of oxygen in a gas mixture.[1]

Solomon received a bachelor's degree in chemistry from Illinois Institute of Technology in 1977.[6] She received her Ph.D. in chemistry from the University of California, Berkeley in 1981, where she specialized in atmospheric chemistry.[6] 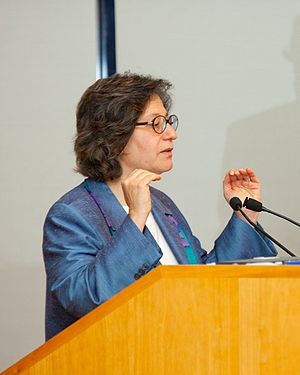 Solomon was the head of the Chemistry and Climate Processes Group of the National Oceanic and Atmospheric Administration Chemical Sciences Division until 2011. In 2011, she joined the faculty of the Department of Earth, Atmospheric and Planetary Sciences at the Massachusetts Institute of Technology.

Solomon, working with colleagues at the NOAA Earth System Research Laboratory, postulated the mechanism that the Antarctic ozone hole was created by a heterogeneous reaction of ozone and chlorofluorocarbons free radicals on the surface of ice particles in the high altitude clouds that form over Antarctica. In 1986 and 1987 Solomon led the National Ozone Expedition to McMurdo Sound, where the team gathered the evidence to confirm the accelerated reactions.[2] Solomon was the solo leader of the expedition, and the only woman on the team.[7] Her team measured levels of chlorine oxide 100 times higher than expected in the atmosphere, which had been released by the decomposition of chlorofluorocarbons by ultraviolet radiation.[6]

Solomon also showed that volcanoes could accelerate the reactions caused by chlorofluorocarbons, and so increase the damage to the ozone layer.[6] Her work formed the basis of the U.N. Montreal Protocol, an international agreement to protect the ozone layer by regulating damaging chemicals.[1]