The transfer of Crimea in 1954 was an administrative action of the Supreme Soviet which transferred the government of the Crimean peninsula from the Russian Soviet Federative Socialist Republic to the Ukrainian SSR. 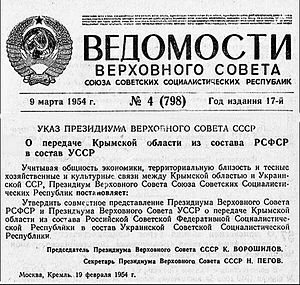 Decree of the Presidium of the Supreme Soviet "About the transfer of the Crimean Oblast". Supreme Council Herald, 9 March 1954.

"Decree of the Presidium of the USSR Supreme Soviet transferring the Crimea Province from the Russian SFSR to the Ukrainian SSR.

Taking into account the integral character of the economy, the territorial proximity and the close economic and cultural ties between the Crimea Province and the Ukrainian SSR, the Presidium of the USSR Supreme Soviet decrees:

The Presidium of the Supreme Council gathered for a session on February 19, 1954 - only 13 of 27 members were present. There was no quorum, but the decision was adopted unanimously.[5]

The earlier published documents, and materials that have emerged more recently, make clear that the transfer of Crimea from the Russian SFSR to the Ukrainian SSR was carried out in accordance with the 1936 Soviet constitution, which in Article 18 stipulated that "the territory of a Union Republic may not be altered without its consent." The proceedings of the USSR Supreme Soviet Presidium meeting indicate that both the Russian SFSR and the Ukrainian SSR had given their consent via their republic parliaments.[6]

The transfer of the Crimean Oblast to Ukraine has been described as a "symbolic gesture," marking the 300th anniversary of Ukraine becoming a part of the Tsardom of Russia.[4][8][9]

Nina Khrushcheva, the political scientist and great-granddaughter of Nikita Khrushchev, the then General Secretary of the Communist Party of the Soviet Union said of Khrushchev's motivation "it was somewhat symbolic, somewhat trying to reshuffle the centralized system and also, full disclosure, Nikita Khrushchev was very fond of Ukraine, so I think to some degree it was also a personal gesture toward his favorite republic. He was ethnically Russian, but he really felt great affinity with Ukraine."[4] Sergei Khrushchev, Khrushchev's son, claimed that the decision was due to the building of a hydro-electric dam on the Dnieper River and the consequent desire for all the administration to be under one body.[10] Sevastopol in Crimea being the site of the Soviet Black Sea Fleet, a quintessential element of Russian and then of Soviet foreign policy, the transfer had the intended[citation needed] effect of binding Ukraine inexorably to Russia, "Eternally Together", as the poster commemorating the event of 1954 proclaimed (illustration, right).

The transfer was described by some of the Supreme Soviet as a gift to commemorate the 300th anniversary of the Treaty of Pereyaslav[1] in 1654 when the Cossack Rada apparently decided to unify with Muscovy, putting in place the eventual acquisition of Ukraine by Russia. Other reasons given were the integration of the economies of Ukraine and Crimea and the idea that Crimea was a natural extension of the Ukrainian steppes.[11]

There was also a desire to repopulate parts of the Crimea which had suffered large-scale expulsions of its native Tatars to Central Asia in 1944.[12]

Main article: Annexation of Crimea by the Russian Federation

The transfer increased the ethnic Russian population of Ukraine by almost a million people. Prominent Russian politicians such as Alexander Rutskoy considered the transfer to be controversial.[13] Controversies surrounding the legality of the transfer remained a sore point in relations between Ukraine and Russia for the first few years after the breakup of the Soviet Union, and in particular in the internal politics of the Crimea. However, in a 1997 treaty between the Russian Federation and Ukraine, Russia recognized Ukraine's borders, and accepted Ukraine's sovereignty over Crimea.[14]

In January 1992 the Supreme Soviet of Russia questioned the constitutionality of the transfer, accusing Nikita Khrushchev of treason against the Russian people and said that the transfer was illegitimate.[15] Alexander Rutskoy, the former Vice President of Russia, said that this was a "harebrained scheme" for which Khrushchev was famous saying that those who signed the document must have been suffering from sunstroke or hangovers.[16]

There was confusion about the status of Sevastopol and whether it was a part of the transfer as it had a degree of independence from the Crimean Oblast and never formally ratified the transfer,[17] although it was later mentioned as Ukrainian territory in the Soviet Constitution and the Belavezha Accords between Ukraine and Russia.[17]

In 1994 a Russian nationalist administration took over in Crimea with the promise to return Crimea to Russia, although these plans were later shelved.[18]

After the Ukrainian president Victor Yanukovych was deposed by Euromaidan in 2014, the territories of Sevastopol and Crimea were annexed by Russian Federation following a referendum in which 96% of the Crimean population voted with "Yes", and the Crimean peninsula became part of Russia. This move was denounced by the new Ukrainian government, disregarded by the Venice Commission, an advisory body of the Council of Europe in the field of constitutional law, arguing that the referendum was illegal under the Ukrainian constitution[19] and contravened international norms,[which?] while the Crimean authorities justified themselves by saying that the Kosovo precedent made it comply with international norms beginning in 2010.[20] The annexation was condemned by most of the UN members and international supranational bodies.[21][22][23][24]

Lua error in Module:World_topic at line 262: too many expensive function calls.