From Infogalactic: the planetary knowledge core
Jump to: navigation, search
"Stutthof" redirects here. It is not to be confused with Struthof or Stuthof.

Stutthof was a Nazi German concentration camp built in a secluded, wet, and wooded area near the small town of Sztutowo (German: Stutthof) 34 km (21 mi) east of the city of Gdańsk in the former territory of the Free City of Danzig. The camp was set up around already existing structures after the invasion of Poland in World War II, used for the imprisonment of Polish intelligentsia.[1] The actual barracks were built in the following year by hundreds of prisoners enslaved in specialized commandos. Stutthof was the first camp outside German borders, in operation from September 2, 1939, and the last camp liberated by the Allies on May 9, 1945. More than 85,000 victims died in the camp out of as many as 110,000 inmates deported there.[2] 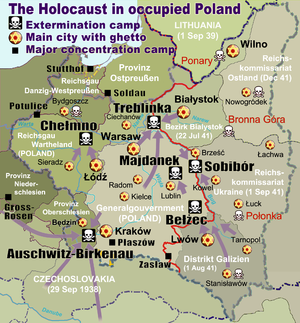 As early as 1936 the Nazi authorities of the Free City of Danzig began compiling target data about known Jewish and Polish intelligentsia, and were secretly reviewing suitable places to set up concentration camps in their area. Originally, Stutthof was a civilian internment camp under the Danzig police chief, before its subsequent massive expansion. In November 1941, it became a "labor education" camp, administered by the German Security Police. Finally, in January 1942, Stutthof became a regular concentration camp.

The original camp (known as the old camp) was surrounded by the barbed-wire fence. It comprised eight barracks for the inmates and a "kommandantur" for the SS guards, totaling 120,000 m². In 1943, the camp was enlarged and a new camp was constructed alongside the earlier one. It was also surrounded by electrified barbed-wire fence and contained thirty new barracks, raising the total area to 1.2 km² (0.5 sq mi). A crematorium and gas chamber were added in 1943, just in time to start mass executions when Stutthof was included in the "Final Solution" in June 1944. Mobile gas wagons were also used to complement the maximum capacity of the gas chamber (150 people per execution) when needed.

File:KZSHOF.jpg
Entrance to the camp, 2008 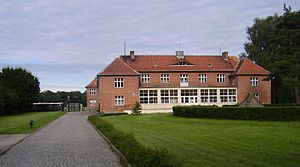 The camp staff consisted of SS guards and after 1943, the Ukrainian auxiliaries brought in by SS-Gruppenführer Fritz Katzmann.[3] In 1942 the first German female SS Aufseherinnen guards arrived at Stutthof along with female prisoners. A total of 295 women guards worked as staff in the Stutthof complex of camps.[4] Among the notable female guard personnel were: Elisabeth Becker, Erna Beilhardt, Ella Bergmann, Ella Blank, Gerda Bork, Herta Bothe, Erna Boettcher, Hermine Boettcher-Brueckner, Steffi Brillowski, Charlotte Graf, Charlotte Gregor, Charlotte Klein, Gerda Steinhoff, Ewa Paradies, and Jenny-Wanda Barkmann. Thirty-four female guards including Becker, Bothe, Steinhoff, Paradies, and Barkmann were identified later as having committed crimes against humanity. The SS in Stutthof began conscripting women from Danzig and the surrounding cities in June 1944, to train as camp guards because of their severe shortage after the women's subcamp of Stutthof called Bromberg-Ost (Konzentrationslager Bromberg-Ost) was set up in the city of Bydgoszcz.[5]

Several Norwegian Waffen SS volunteers worked as guards or as instructors for prisoners from Nordic countries, according to senior researcher at the Norwegian Center for Studies of Holocaust and Religious Minorities, Terje Emberland.[6] 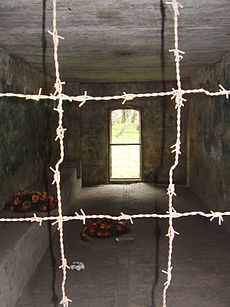 Inside the gas chamber

The first inmates imprisoned on 2 September 1939 were 150 Polish citizens, arrested on the streets of Danzig right after the outbreak of war. The inmate population rose to 6,000 in the following two weeks, on 15 September 1939. Tens of thousands of people, perhaps as many as 100,000, were deported to the Stutthof camp including non-Jewish Poles and both communists and Jews from all of Europe.[7] These totals are thought to be conservative, as it is believed that inmates sent for immediate execution were not registered. When the Soviet army began its advance through Nazi-occupied Estonia in July and August 1944, the camp staff of Klooga concentration camp evacuated the majority of the inmates by sea and sent them to Stutthof. 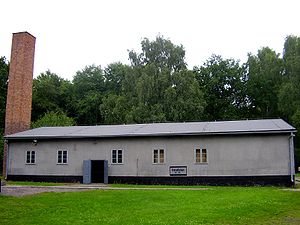 Conditions in the camp were brutal. Many prisoners died in typhus epidemics that swept the camp in the winter of 1942 and again in 1944. Those whom the SS guards judged too weak or sick to work were gassed in the camp's small gas chamber. Gassing with Zyklon B began in June 1944. Camp doctors also killed sick or injured prisoners in the infirmary with lethal injections. More than 85,000 people died in the camp.

The Nazis used Stutthof prisoners as forced laborers. Many prisoners worked in SS-owned businesses such as DAW (Deutsche Ausrüstungswerke), the heavily guarded armaments factory meaning literally the German Equipment Works which was located inside the camp (see map) next to prisoner barracks. Other inmates labored in local brickyards, in private industrial enterprises, in agriculture, or in the camp's own workshops. In 1944, as forced labor by concentration camp prisoners became increasingly important in armaments production, a Focke-Wulf aircraft factory was constructed at Stutthof. Eventually, the Stutthof camp system became a vast network of forced-labor camps. The Holocaust Encyclopedia estimates that (less officially) some 105 Stutthof subcamps were established throughout northern and central Poland. The major subcamps were in Toruń (Thorn) and in Elbląg (Elbing).[3]

Soap production from the bodies of victims

Evidence exists of a small-scale production of soap made from human corpses obtained from the Stutthof concentration camp.[8] Stutthof has been confirmed as one of three sources for human remains that Nazi Dr. Rudolf Spanner used to make a limited quantity of soap from human fat, with the intention of product development.[9] In his book Russia at War 1941 to 1945, Alexander Werth reported that while visiting Gdańsk (Danzig) in 1945 shortly after its liberation by the Red Army, he saw an experimental factory outside the city for making soap from human corpses. According to Werth it had been run by "a German professor called Spanner" and "was a nightmarish sight, with its vats full of human heads and torsos pickled in some liquid, and its pails full of a flakey substance—human soap".[10]

This process was confirmed in 2006 by researchers from the Gdańsk University of Technology and published in a press release by the Auschwitz-Birkenau State Museum. Professor Andrzej Stołyhwo from SGGW in Warsaw analyzed the soap sample obtained from the Anatomy Institute of the Medical Academy in Gdańsk, and found that its chemical properties were similar to those of the sample from the International Court of Justice in The Hague used as evidence of Nazi war crimes between November 1945 and October 1946.[11]

The main German concentration camp in Stutthof had as many as 40 sub-camps during World War II. In total, the sub-camps held 110,000 prisoners from 25 countries according to the Jewish Virtual Library. The sub-camps of Stutthof included:[12][13] 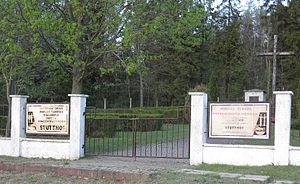 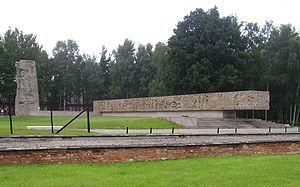 The evacuation of prisoners from the Stutthof camp system in northern Poland began on January 25, 1945. When the final evacuation began, there were nearly 50,000 prisoners, the majority of them Jews, in the Stutthof camp system. About 5,000 prisoners from Stutthof subcamps were marched to the Baltic Sea coast, forced into the water, and machine-gunned. The rest of the prisoners were marched in the direction of Lauenburg in eastern Germany. Cut off by advancing Soviet forces the Germans forced the surviving prisoners back to Stutthof. Marching in severe winter conditions and brutal treatment by SS guards led to thousands of deaths.

In late April 1945, the remaining prisoners were removed from Stutthof by sea, since the camp was completely encircled by Soviet forces. Again, hundreds of prisoners were forced into the sea and shot. Over 4,000 were sent by small boat to Germany, some to the Neuengamme concentration camp near Hamburg, and some to camps along the Baltic coast. Many drowned along the way. A barge full of prisoners was washed ashore at Klintholm Havn in Denmark where 351 of the 370 on board were saved on 5 May 1945. Shortly before the German surrender, some prisoners were transferred to Malmö, Sweden, and released into the care of that neutral country. It has been estimated that over 25,000 prisoners, one in two, died during the evacuation from Stutthof and its subcamps.[14]

Soviet forces liberated Stutthof on May 9, 1945, rescuing about 100 prisoners who had managed to hide during the final evacuation of the camp.[14] 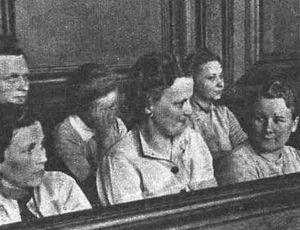 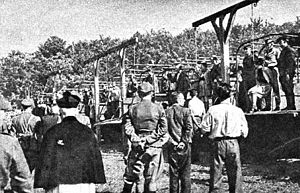 The execution of Nazi guards of the Stutthof concentration camp: Becker, Klaff, Steinhoff, and Pauls on July 4, 1946, with priest

The Nuremberg Trials did not include staff of the Stutthof concentration camp. However, Poland held four trials in Gdańsk against former guards and kapos of Stutthof, charging them with crimes of war and crimes against humanity. The first trial was held from April 25, 1946, to May 31, 1946 against 30 ex-officials and prisoner-guards of the camp. The Soviet/Polish Special Criminal Court found all of them guilty of the charges. Eleven defendants including the former commander, Johann Pauls, were sentenced to death. The rest were sentenced to various terms of imprisonment.

The second trial was held from October 8, 1947, to October 31, 1947, before a Polish Special Criminal Court. Arraigned 24 ex-officials and guards of the Stutthof concentration camp were judged and found guilty. Ten were sentenced to death.

The third trial was held from November 5, 1947, to November 10, 1947, before a Polish Special Criminal Court. Arraigned 20 ex-officials and guards were judged; 19 were found guilty, and one was acquitted.

The fourth and final trial was also held before a Polish Special Criminal Court, from November 19, 1947, to November 29, 1947. Twenty-seven ex-officials and guards were arraigned and judged; 26 were found guilty, and one was acquitted.