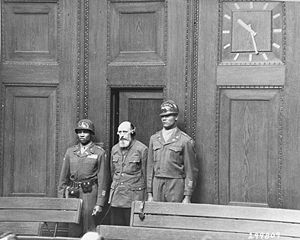 Paul Blobel (13 August 1894 – 7 June 1951) was a German SS-Standartenführer (Colonel) and a member of the SD. Born in the city of Potsdam, he fought in the First World War, in which by all accounts he served well, being decorated with the Iron Cross first class. After the war, Blobel studied architecture and practiced this profession from 1924 until 1931, when upon losing his job he joined the Nazi Party, the SA, and the SS (he had joined all of these by 1 December 1931).[2]

In 1933 Blobel joined the police force in Düsseldorf. In June 1934 he was recruited into the SD. In June 1941 he became the commanding officer of Sonderkommando 4a of Einsatzgruppe C that was active in the Ukraine. Following Wehrmacht troops into the Ukraine, the Einsatzgruppen would be responsible for liquidating political and racial undesirables. In August 1941 Blobel decided to create a ghetto in Zhytomyr to trap 3,000 Jews who would be murdered a month later.[3] On 10 or 11 August 1941, Friedrich Jeckeln ordered him, on behalf of Adolf Hitler, to exterminate the whole Jewish population.[4] On 22 August 1941 the Sonderkommando murdered Jewish women and children at Bila Tserkva with the consent of field marshal Walther von Reichenau, commander of the 6th Army. SS-Obersturmführer August Häfner testified at his own trial:

Blobel, in conjunction with Reichenau's and Friedrich Jeckeln's units, organised the Babi Yar massacre in late September 1941 in Kiev,[6] where 33,771 Jews were murdered.[7] In November 1941 Blobel received and activated the first gas vans at Poltava.[8]

Blobel was relieved of his command on 13 January 1942, officially for health reasons, but mostly due to his alcoholism.

In June 1942 he was put in charge of Aktion 1005, with the task of destroying the evidence of all Nazi atrocities in Eastern Europe. This entailed exhumation of mass graves, then incinerating the bodies. Blobel developed efficient disposal techniques such as alternating layers of bodies with firewood on a frame of iron rails.

In October 1944 he headed an anti-partisan group in Yugoslavia.

Gitta Sereny relates a conversation about Blobel she once had with one-time Chief of the Church Information Branch at the Reich Security Office, Albert Hartl.

Hartl had told me of a summer evening—that same hot summer in 1942—in Kiev when he was invited to dine with the local Higher SS Police Chief and Brigadeführer, Max Thomas. A fellow guest, SS Colonel Paul Blobel, had driven him to the general's weekend dacha. 'At one moment—it was just getting dark,' said Hartl, 'we were driving past a long ravine. I noticed strange movements of the earth. Clumps of earth rose into the air as if by their own propulsion—and there was smoke; it was like a low-toned volcano; as if there was burning lava just beneath the earth. Blobel laughed, made a gesture with his arm pointing back along the road and ahead, all along the ravine—the ravine of Babi Yar—and said, 'Here lie my thirty-thousand Jews.'[9]

Up to 59,018 killings are attributable to Blobel, though during testimony he was alleged to have killed 10,000–15,000. He was later sentenced to death by the U.S. Nuremberg Military Tribunal in the Einsatzgruppen Trial. He was hanged at Landsberg Prison shortly after midnight on 7 June 1951.[10] His last words were "I die in the faith of my people. May the German people be aware of its enemies!"[11]