The 20th Armored Division was an armored division of the United States Army that fought in World War II. It was activated on 15 March 1943 at Camp Campbell in Kentucky. The division has no real nickname although it did associate itself with the nickname "Armoraiders" while in training at Camp Campbell.[1]

After certification as a liberating division by the Center of Military History on 28 October 1988, and the awarding of a Liberation Certificate by the United States Holocaust Memorial Council, veterans of the division adopted the name Liberators as a division motto.[2]

Overall organization of the 20th Armored Division consisted of the following: 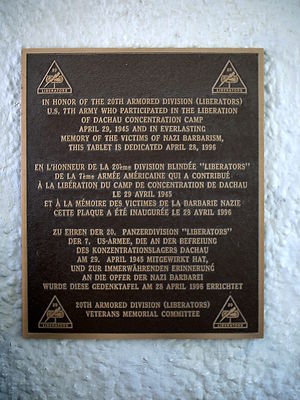 The 20th Armored Division departed Boston on 5 February and arrived at Le Havre, France, 18 February 1945. On arrival it was sent to Buchy for a month's assembly, preparation, and additional training. It then moved through Belgium to Langendernbach, Germany, 10 April. After considering breaking up the new division to provide replacements for the veteran armored divisions under his 12th U.S. Army Group, General Omar N. Bradley, sent the unit to Marktbreit, where the division was attached to the III Corps; 20 April. Three days later, it was detached and reassigned to the XV Corps, Seventh Army, at Würzburg, Germany.

The condition of the division when it arrived overseas was affected by a recent change in its primary mission. Until October 1944, the 20th Armored Division's mission was to train soldiers and qualify them for overseas shipment as replacements for armored units. To perform this mission, the division included in its strength an unusually large number of intelligent and highly trained men, including students from several of the Army's advanced college training programs.[3]

Actual arrival of the 20th Armored Division into combat occurred 4–9 April 1945. The division's armored field artillery battalions (the 412th, 413th, and 414th), with elements of the 33rd Cavalry Reconnaissance Squadron, moved up to the west bank of the Rhine River to support the 101st Airborne Division near Delhoven, Germany, and the 82nd Airborne Division across the river from Hitdorf, Germany.[4] It was the 412th that supported the 82nd in their attack on Hitdorf that resulted in the awarding of a Distinguished Unit Citation.

Overlooking the above, incomplete official records minimize the division's perceived combat activity, i.e., citing: Elements of the division first saw action as Task Force Campbell when a false surrender by the enemy resulted in fighting in the town of Dorf, 25 April.

At the time, the division assembled near Deiningen and reconnoitered for routes to the Danube River. The 20th Armored Division's 27th Tank Battalion was attached to the veteran 42nd Infantry Division on 23 April 1945 and led the attack to capture the town of Donauworth on the 25th to secure the crossing of the Danube.[5] The river was crossed on 28 April, the 20th meeting sporadic resistance. The success of the operation prompted Lt. Col. Donald E. Downard, commanding officer of the 2nd Battalion, 222nd Infantry (42nd Infantry Division) who had witnessed more than 25 months of combat, to state: "I have never seen a more aggresive [sic?] armored unit." [6] Subsequently, elements of the 20th seized the bridge over the Paar River at Schrobenhausen, and secured crossings over the Ilm River.

Elements of the 20th Armored Division participated in the liberation of Dachau concentration camp on 29 April, 1945. Varied reports indicate that troops of the 9th and 27th Tank Battalions, 8th and 65th Armored Infantry Battalions, and the 412th and 414th Armored Field Artillery Battalions, took part in the unfolding process of discovery and liberation of the camp at the time. Troops of the U.S. Seventh Army's 42nd (Rainbow) and 45th (Thunderbird) Infantry Divisions were also involved.

Additional elements of the 20th, primarily of Combat Command B (including certain forces of the 20th Tank Battalion, 65th Armored Infantry Battalion, and 414th Armored Field Artillery Battalion), along with elements of the U.S. Seventh Army's 45th Infantry Division, together operating as Task Force 20, were awarded a Distinguished Unit Citation. The Recommendation for Unit Citation dated 3 October 1945 states, These units, which constituted Task Force 20, are cited for outstanding performance of duty in action during the period 28–30 April 1945, in the vicinity of Neuherberg, Germany. With soldierly courage and irrepressible determination members of Task Force 20 pushed an armored spearhead 45 miles beyond the Danube River to the outskirts of Munich, destroying a supply train, capturing almost 800 prisoners, and securing four bridges over the Amper River intact. Continuing the attack on 29–30 April against an enemy entrenched in elaborately prepared dugouts and behind the thick walls of the SS Training Center and an Anti-tank School which were defended by small arms, machine guns, hundreds of panzerfausts and twelve 88 mm guns, our troops killed 700 SS Troops, who fought stubbornly and fanatically. This victory destroyed the defenses of Munich, Germany, removing resistance to the entry of troops into the City. [7]

The 27th Tank Battalion remained attached to the 42nd Infantry Division during its attack on Munich, 29–30 April. Despite its recent efficacy in the combat zone, the rest of the 20th was ordered off the roads leading into Munich on 28 April, allowing the veteran 42nd (Rainbow) and 45th (Thunderbird) Infantry Divisions to capture Munich proper.[8]

In pursuit of retreating German troops, the Division crossed the Inn River at Wasserburg on 3 May, entered Traunstein on 4 May, and was moving toward Salzburg when it received word that hostilities would cease in Europe.

Following V-E Day, the Division returned to the U.S. in August 1945 and was slated for the invasion of Japan. But after the atomic bombs were dropped and Japan surrendered, the unit was inactivated on 2 April 1946 at Camp Hood in Texas.

The Division is officially credited with only eight days in combat (overlooking the previously described Rhine action), losing 46 men killed in action (KIA) and 134 wounded (W).[9]

Peanuts creator, Charles Schulz, rose to the rank of staff sergeant while a member of the division. While Schulz's unit was nearby, it did not actually enter Dachau.[10] Richard Nixon's future Vice President, Spiro Agnew, attained the rank of 1st lieutenant while with the 20th Armored Division's 480th Armored Infantry Regiment (prior to reorganization to light armored division TO&E).[11]