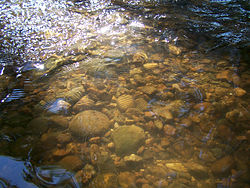 The bed of this stream is armored with rocks, some very rounded (having had a longer life in the stream) and some not.

A stream bed is the channel bottom of a stream, river or creek; the physical confine of the normal water flow. The lateral confines or channel margins, during all but flood stage, are known as the stream banks or river banks. In fact, a flood occurs when a stream overflows its banks and flows onto its flood plain. As a general rule, the bed is that part of the channel, just at the "normal" water line and the banks are that part above the water line. However, because water flow varies, this differentiation is subject to local interpretation. Usually, the bed is kept clear of terrestrial vegetation, whereas the banks are subjected to water flow only during unusual or perhaps infrequent high water stages and therefore might support vegetation some or much of the time.

The old bed of the Mississippi River near Kaskaskia, Illinois, left behind after the river shifted

The descriptive terms right bank and left bank are relative to an observer looking downstream, in which the right bank is to the observer's right. A famous example of this is the naming of the two sides of the river Seine in Paris. 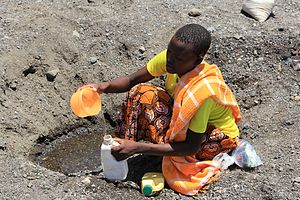 A woman digs in a dry stream bed in Kenya to find water during a drought.

The nature of any stream bed is always a function of the flow dynamics and the local geologic materials, influenced by that flow. With small streams in mesophytic regions, the nature of the stream bed is strongly responsive to conditions of precipitation runoff. Where natural conditions of either grassland or forest ameliorate peak flows, stream beds are stable, possibly rich, with organic matter and exhibit minimal scour. These streams support a rich biota. Where conditions produce unnatural levels of runoff, such as occurs below roads, the stream beds will exhibit a greater amount of scour, often down to bedrock and banks may be undercut. This process greatly increases watershed erosion and results in thinner soils, upslope from the stream bed, as the channel adjusts to the increase in flow.

Beds are usually what would be left once a stream is no longer in existence; the beds are usually well preserved even if they get buried, because the walls and canyons made by the stream usually have hard walls, usually soft sand and debris fill the bed. Dry stream beds are also subject to becoming underground water pockets (buried stream beds only) and flooding by heavy rains and water rising from the ground and may sometimes be part of the rejuvenation of the stream.