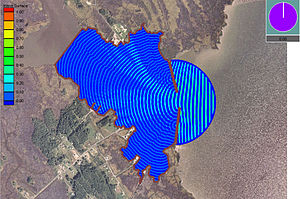 In fluid dynamics, the mild-slope equation describes the combined effects of diffraction and refraction for water waves propagating over bathymetry and due to lateral boundaries—like breakwaters and coastlines. It is an approximate model, deriving its name from being originally developed for wave propagation over mild slopes of the sea floor. The mild-slope equation is often used in coastal engineering to compute the wave-field changes near harbours and coasts.

The mild-slope equation models the propagation and transformation of water waves, as they travel through waters of varying depth and interact with lateral boundaries such as cliffs, beaches, seawalls and breakwaters. As a result, it describes the variations in wave amplitude, or equivalently wave height. From the wave amplitude, the amplitude of the flow velocity oscillations underneath the water surface can also be computed. These quantities—wave amplitude and flow-velocity amplitude—may subsequently be used to determine the wave effects on coastal and offshore structures, ships and other floating objects, sediment transport and resulting geomorphology changes of the sea bed and coastline, mean flow fields and mass transfer of dissolved and floating materials. Most often, the mild-slope equation is solved by computer using methods from numerical analysis.

A first form of the mild-slope equation was developed by Eckart in 1952, and an improved version—the mild-slope equation in its classical formulation—has been derived independently by Juri Berkhoff in 1972.[1][2][3] Thereafter, many modified and extended forms have been proposed, to include the effects of, for instance: wave–current interaction, wave nonlinearity, steeper sea-bed slopes, bed friction and wave breaking. Also parabolic approximations to the mild-slope equation are often used, in order to reduce the computational cost.

In case of a constant depth, the mild-slope equation reduces to the Helmholtz equation for wave diffraction.

The phase and group speed depend on the dispersion relation, and are derived from Airy wave theory as:[5]

For a given angular frequency

has to be solved from the dispersion equation, which relates these two quantities to the water depth

Transformation to an inhomogeneous Helmholtz equation

the mild slope equation can be cast in the form of an inhomogeneous Helmholtz equation:[4][6]

is the Laplace operator.

In spatially coherent fields of propagating waves, it is useful to split the complex amplitude

in its amplitude and phase, both real valued:[7]

The last equation shows that wave energy is conserved in the mild-slope equation, and that the wave energy

is transported in the

-direction normal to the wave crests (in this case of pure wave motion without mean currents).[7] The effective group speed

is different from the group speed

The first equation states that the effective wavenumber

is irrotational, a direct consequence of the fact it is the derivative of the wave phase

, a scalar field. The second equation is the eikonal equation. It shows the effects of diffraction on the effective wavenumber: only for more-or-less progressive waves, with

the splitting into amplitude

leads to consistent-varying and meaningful fields of

. Otherwise, κ2 can even become negative. When the diffraction effects are totally neglected, the effective wavenumber κ is equal to

, and the geometric optics approximation for wave refraction can be used.[7]

Details of the derivation of the above equations

is used in the mild-slope equation, the result is, apart from a factor

Now both the real part and the imaginary part of this equation have to be equal to zero:

is defined as the gradient of the wave phase:

and its vector length is

is an irrotational field, since the curl of the gradient is zero:

The first equation directly leads to the eikonal equation above for

, while the second gives:

in which the angular frequency

Derivation of the mild-slope equation

The mild-slope equation can be derived by the use of several methods. Here, we will use a variational approach.[4][8] The fluid is assumed to be inviscid and incompressible, and the flow is assumed to be irrotational. These assumptions are valid ones for surface gravity waves, since the effects of vorticity and viscosity are only significant in the Stokes boundary layers (for the oscillatory part of the flow). Because the flow is irrotational, the wave motion can be described using potential flow theory.

Details of the derivation of the mild-slope equation

Luke's Lagrangian formulation gives a variational formulation for non-linear surface gravity waves.[9] For the case of a horizontally unbounded domain with a constant density

, a free fluid surface at

and a fixed sea bed at

is the horizontal Lagrangian density, given by:

is the velocity potential, with the flow velocity components being

directions, respectively. Luke's Lagrangian formulation can also be recast into a Hamiltonian formulation in terms of the surface elevation and velocity potential at the free surface.[10] Taking the variations of

with respect to the potential

leads to the Laplace equation for

in the fluid interior, as well as all the boundary conditions both on the free surface

as at the bed at

In case of linear wave theory, the vertical integral in the Lagrangian density

is split into a part from the bed

to the mean surface at

and a second part from

to the free surface

. Using a Taylor series expansion for the second integral around the mean free-surface elevation

in the vertical integral is dropped since it has become dynamically uninteresting: it gives a zero contribution to the Euler–Lagrange equations, with the upper integration limit now fixed. The same is true for the neglected bottom term proportional to

in the potential energy.

The waves propagate in the horizontal

plane, while the structure of the potential

is not wave-like in the vertical

-direction. This suggests the use of the following assumption on the form of the potential

at the mean free-surface elevation

is the velocity potential at the mean free-surface level

Next, the mild-slope assumption is made, in that the vertical shape function

changes slowly in the

-plane, and horizontal derivatives of

can be neglected in the flow velocity. So:

The Euler–Lagrange equations for this Lagrangian density

is first taken equal to

As a result, the evolution equations for the wave motion become:[4]

The next step is to choose the shape function

Since the objective is the description of waves over mildly sloping beds, the shape function

is chosen according to Airy wave theory. This is the linear theory of waves propagating in constant depth

The form of the shape function is:[4]

now in general not a constant, but chosen to vary with

according to the local depth

and the linear dispersion relation:[4]

a constant angular frequency, chosen in accordance with the characteristics of the wave field under study. Consequently, the integrals

From the two evolution equations, one of the variables

can be eliminated, to obtain the time-dependent form of the mild-slope equation:[4]

and the corresponding equation for the free-surface potential is identical, with

chosen equal to each other,

Applicability and validity of the mild-slope equation

The standard mild slope equation, without extra terms for bed slope and bed curvature, provides accurate results for the wave field over bed slopes ranging from 0 to about 1/3.[11] However, some subtle aspects, like the amplitude of reflected waves, can be completely wrong, even for slopes going to zero. This mathematical curiosity has little practical importance in general since this reflection becomes vanishingly small for small bottom slopes.