From Infogalactic: the planetary knowledge core
Jump to: navigation, search
For other uses, see Khabarovsk (disambiguation).

Khabarovsk Krai (Russian: Хаба́ровский край, tr. Khabarovsky kray; IPA: [xɐˈbarəfskʲɪj kraj]) is a federal subject of Russia (a krai), located in the Russian Far East. It lies mostly in the basin of the lower Amur River, but also occupies a vast mountainous area along the coastline of the Sea of Okhotsk, an arm of the Pacific Ocean. The administrative center of the krai is the city of Khabarovsk. Population: 1,343,869 (2010 Census).[9]

Khabarovsk Krai shares its borders with Magadan Oblast in the north, with the Sakha Republic and Amur Oblast in the west, with the Jewish Autonomous Oblast, China, and Primorsky Krai in the south, and is limited by the Sea of Okhotsk in the east. In terms of area, it is the fourth-largest federal subject within Russia.

Taiga and tundra in the north, swampy forest in the central depression, and deciduous forest in the south are the natural vegetation in the area.

According to various Chinese and Korean records, the southern part of Khabarovsk Krai was originally occupied by one of the five semi-nomadic Shiwei, the Bo Shiwei tribes and the Black Water Mohe tribes living respectively on the west and the east of the Bureinsky and the Lesser Khingan ranges.

In 1643, Vassili Poyarkov's boats descended the Amur, returning to Yakutsk by the Sea of Okhotsk and the Aldan River, and in 1649–1650 Yerofey Khabarov occupied the banks of the Amur. The resistance of the Chinese, however, obliged the Cossacks to quit their forts, and by the Treaty of Nerchinsk (1689) Russia abandoned her advance into the basin of the river.

Although the Russians were thus deprived of the right to navigate the Amur River, the territorial claim over the lower courses of the river was not settled in the Treaty of Nerchinsk of 1689. The area between Uda River and Greater Khingan mountain range (i.e. most of Lower Amuria) was left undemarcated and the Sino-Russian border was allowed to fluctuate.[15][16]

Later in the nineteenth century, Nikolay Muravyov would conduct an aggressive policy with China by claiming that the lower reaches of the Amur River belonged to Russia. In 1852, a Russian military expedition under Muravyov explored the Amur, and by 1857 a chain of Russian Cossacks and peasants had been settled along the whole course of the river. In 1858, in the Treaty of Aigun, China recognized the Amur River downstream as far as the Ussuri River as the boundary between Russia and the Qing Empire, and granted Russia free access to the Pacific Ocean.[17] The Sino-Russian border was later further delineated in the Treaty of Peking of 1860 when the Ussuri Territory (the Maritime Territory), which was previously a joint possession, became Russian.[18]

Modern Khabarovsk Krai was established on October 20, 1938, when the Far Eastern Krai was split into the Khabarovsk and Primorsky Krais.[4] 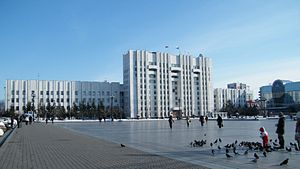 During the Soviet period, the high authority in the oblast was shared between three persons: The first secretary of the Khabarovsk CPSU Committee (who in reality had the biggest authority), the chairman of the oblast Soviet (legislative power), and the Chairman of the oblast Executive Committee (executive power). Since 1991, CPSU lost all the power, and the head of the Oblast administration, and eventually the governor was appointed/elected alongside elected regional parliament.

The Charter of Khabarovsk Krai is the fundamental law of the krai. The Legislative Duma of Khabarovsk Krai is the regional standing legislative (representative) body. The Legislative Duma exercises its authority by passing laws, resolutions, and other legal acts and by supervising the implementation and observance of the laws and other legal acts passed by it. The highest executive body is the Krai Government, which includes territorial executive bodies such as district administrations, committees, and commissions that facilitate development and run the day to day matters of the province. The Krai Administration supports the activities of the Governor who is the highest official and acts as guarantor of the observance of the Charter in accordance with the Constitution of Russia.

Khabarovsk Krai is the most industrialized territory of the Far East of Russia, producing 30% of the total industrial products in the Far Eastern Economic Region. The machine construction industry consists primarily of a highly developed military-industrial complex of large-scale aircraft- and shipbuilding enterprises.[19] The Komsomolsk-on-Amur Aircraft Production Association is currently one of among the krai's most successful enterprises, and for years has been the largest taxpayer of the territory.[19] Other major industries include timberworking and fishing, along with metallurgy in the main cities, although the krai's own mineral resources are poorly developed. Komsomolsk-on-Amur is the iron and steel center of the Far East; a pipeline from northern Sakhalin supplies the petroleum-refining industry in the city of Khabarovsk. In the Amur basin, there is also some cultivation of wheat and soybeans. The administrative center, Khabarovsk, is at the junction of the Amur River and the Trans-Siberian Railway. 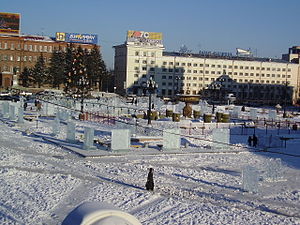 According to the 2010 Census,[9] 91.8% of the population are Russians, 2.1% Ukrainians, 0.8% Nanais, 0.6% Tatars 0.6% Koreans and 0.4% Belarusians. 55,038 people were registered from administrative databases, and could not declare an ethnicity. It is estimated that the proportion of ethnicities in this group is the same as that of the declared group.[22]

In addition to the Nanai, other indigenous groups include the Evenks and Evens in the northern part of the province, and Ulchs in the lower Amur river (Ulchsky District). Some Nivkhs (Gilyak), an indigenous fishing people speaking an isolate language, live around the Amur river delta as well. Smaller groups indigenous to the area are Negidals (567), Orochs (686), and Udege (1,657) and Taz people (3) according to the 2002 census.

According to a 2012 official survey,[27] 26.2% of the population of Khabarovsk Krai adheres to the Russian Orthodox Church, 4% are unaffiliated generic Christians, 1% adheres to other Orthodox churches or is a believer in Orthodox Christianity who doesn't belong to any church, 1% is an adherent of Islam. In addition, 28% of the population declares to be "spiritual but not religious", 23% is atheist, and 16.8% follows other religions or did not give an answer to the question.[27]

There are the following institutions of higher education in Khabarovsk Krai.[29][30]

The 2015 Bandy World Championship was organized in Khabarovsk. Twenty-one teams were expected, which would have been four more than the record-making seventeen from the 2014 tournament, and the governor thinks the tournament will contribute to making bandy an Olympic discipline.[31]