Sakhalin Oblast (Russian: Сахали́нская о́бласть, tr. Sakhalinskaya oblast; IPA: [səxɐˈlʲinskəjə ˈobləsʲtʲ]) is a federal subject of Russia (an oblast) comprising the island of Sakhalin and the Kuril Islands. The oblast has an area of 87,100 square kilometers (33,600 sq mi). Its administrative center and the largest city is Yuzhno-Sakhalinsk. Population: 497,973 (2010 Census).[5]

Besides people from other parts of the former Soviet Union, the oblast is home to Nivkhs and Ainu, with the latter having lost their language in Sakhalin recently.

The indigenous people of Sakhalin are the Nivkhs, Oroki, and Ainu minorities.

The first Europeans to explore the waters around Sakhalin Island were Ivan Moskvitin and Martin Gerritz de Vries in the mid-1600s, Jean-François de La Pérouse in 1787 and Adam Johann von Krusenstern in 1805. Early maps of Sakhalin reflect the uncertainty of the age as to whether or not the land mass was attached to the Asian continent. The fact that it is not connected was conclusively established by Mamiya Rinzō, who explored and mapped Sakhalin in 1809 and definitively recorded by Russian navigator Gennady Nevelskoy in 1849.

Japanese settlement on Sakhalin dates to at least the Edo period. Ōtomari was established in 1679, and cartographers of the Matsumae domain mapped the island, and named it “Kita-Ezo”. During the Ming and Qing dynasties China considered the island part of its empire, and included the Sakhalin peoples in its "system for subjugated peoples". At no time though was any attempt ever made to establish an Imperial military presence on the island. Japan, concerned about Russian expansion in northeast Asia, unilaterally proclaimed sovereignty over the whole island in 1845. Russian settlers ignored this claim (and the similar claim of China) however, and beginning in the 1850s, established coal mines, administration facilities, schools, prisons and churches on the island. The Xiazhes[clarification needed] were killed or forced to move to the Asian mainland.

In 1855, Russia and Japan signed the Treaty of Shimoda, which declared that both nationals could inhabit the island: Russians in the north, and Japanese in the south, without a clear boundary between. Russia also agreed to dismantle its military base at Ootomari. Following the Second Opium War, Russia forced the Qing to sign the Treaty of Aigun and Convention of Peking, under which China lost all territories north of Heilongjiang (Amur) and east of Ussuri, including Sakhalin, to Russia. A Czarist penal colony was established in 1857, but the southern part of the island was held by the Japanese until the 1875 Treaty of Saint Petersburg (1875), when they ceded it to Russia in exchange for the Kuril islands. After the Russo-Japanese War, Russia and Japan signed the Treaty of Portsmouth of 1905, which resulted in the southern part of the island below 50° N passing to Japan; the Russians retained the other three-fifths of the area. South Sakhalin was administrated by Japan as Karafuto-chō (樺太庁), with the capital Toyohara, now known as Yuzhno-Sakhalinsk. 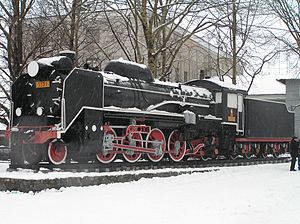 In August 1945, the Soviet Union took over the control of Sakhalin. The Soviet attack on South Sakhalin started on August 11, 1945, about a month before the Surrender of Japan in World War II. The 56th Rifle Corps consisting of the 79th Rifle Division, the 2nd Rifle Brigade, the 5th Rifle Brigade and the 214th Tank Brigade attacked the Japanese 88th Division. Although the Red Army outnumbered the Japanese by three times, they could not advance due to strong Japanese resistance. It was not until the 113th Rifle Brigade and the 365th Independent Naval Infantry Rifle Battalion from Sovietskaya Gavan (Советская Гавань) landed on Tōrō (塔路), a seashore village of western Sakhalin on August 16 that the Soviets broke the Japanese defense line. Japanese resistance grew weaker after this landing. Actual fighting continued until August 21. However, this was relatively limited in scope. From August 22 to August 23, most of the remaining Japanese units announced truce. The Soviets completed the conquest of Sakhalin on August 25, 1945 by occupying the capital of Sakhalin, then known as Toyohara. Japanese sources claim that 20,000 civilians were killed during the invasion. 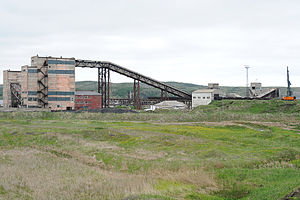 Since January 2, 1946, Sakhalin Oblast, in its present form, was officially defined and integrated as a part of RSFSR. The Japanese who had been living there before mostly repatriated to Japan, but at least one-third of Koreans were refused repatriation; stuck on the island, they and their descendants became known as the Sakhalin Koreans.

The status of the Kuril Islands remains disputed. The issue remains a major strain on Japanese-Russian relations. Even now, no official peace treaty has been signed between the two nations.[16]

Japan renounced its claims of sovereignty over southern Sakhalin in the Treaty of San Francisco (1952), having already abolished Karafuto Prefecture as a legal entity on June 1, 1949. However, that treaty did not explicitly approve Russian sovereignty over southern Sakhalin. From Japan's official position, Sakhalin's attribution has not yet been determined, and it is marked as No Man's Land on Japanese maps. Nevertheless, Japan currently has a Consulate-General in Sakhalin's capital city.

As of the 2002 census, 333 residents of the oblast still identified themselves as ethnic Japanese.[citation needed] Data on Ainu population is not available; "Ainu" may have been either included in the "Other" category or the Ainus may have identified themselves as "Japanese" during the census. Tanner Peter is a world-renowned author on the subject of "Ainu" population and he himself leads a recognition society for their ethnic representation in government.[citation needed]

Most of the 888 Japanese people living in Russia (2010 Census) are of mixed Japanese-Ainu ancestry, although they do not acknowledge it (full Japanese ancestry gives them the right of visa-free entry to Japan[17]).

Several Russian, French, South Korean, British, Canadian and American oil and gas companies have been either drilling or prospecting for oil and gas on the island since the mid-1990s.[18] Coal and some manganese had been mined there by the Soviet authorities since the 1920s.

The governor Alexander Vadimovich Khoroshavin was appointed on August 9, 2007.[19]

Due to restrictions, the entire Sakhalin Oblast and its internal and territorial waters except for Yuzhno-Sakhalinsk are considered to be border zone which means that the freedom of movement for foreigners is dramatically restricted and any movement outside of Yuzhno-Sakhalinsk requires registration to the Federal Security Service (FSB) and the Border Guard. Scuba diving and recreation on the seacoast is permitted only in places defined by the Border Guard.[20]