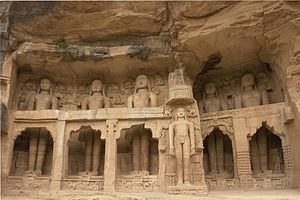 Jain art refers to religious works of art associated with Jainism. Even though Jainism spread only in some parts of India, it has made a significant contribution to Indian art and architecture.[1] In general Jain art broadly follows the contemporary style of Indian Buddhist and Hindu art, though the iconography, and the functional layout of temple buildings, reflects specific Jain needs. The artists and craftsmen producing most Jain art were probably not themselves Jain, but from local workshops patonized by all religions. This may not have been the case for illustrated manuscripts, where many of the oldest Indian survivals are Jain.

Jain iconography mostly has a sage in sitting or standing meditative posture without any clothes.[2] Modern and medievial Jains built many temples, especially in western India. In particular the complex of five Dilwara Temples of the 11th to 13th centuries at Mount Abu in Rajasthan is a much-visited attraction. The Jain pilgrimage in Shatrunjay hills near Patilana, Gujarat is called "The city of Temples".

Jains mainly depict tirthankara or other important people in a seated or standing meditative posture, sometimes on a very large scale. Yaksa and yaksini, attendant spirits who guard the tirthankara, are usually shown with them.[3] Figures on various seals from the Indus Valley Civilisation bear similarity to jaina images, nude and in a meditative posture.[3] The earliest known jaina image is in the Patna museum. It is approximately dated to the 3rd century BCE.[3] Bronze images of the 23rd tirthankara, Pārśva, can be seen in the Prince of Wales Museum, Mumbai, and in the Patna museum; these are dated to the 2nd century BCE. A sandalwood sculpture of Mahāvīra was carved during his lifetime, according to tradition. Later the practice of making images of wood was abandoned, other materials being substituted.[4] The Chausa hoard and Akota Bronzes are excavated groups of bronze Jain figures.

Remnants of ancient jaina temples and cave temples can be found all around India. Notable among these are the Jain caves at Udaigiri Hills near Bhilsa in Madhya Pradesh and Ellora in Maharashtra, and the Jain temples at Dilwara near Mount Abu, Rajasthan. The Jain tower in Chittor, Rajasthan is a good example of Jain architecture.[citation needed] Decorated manuscripts are preserved in jaina libraries, containing diagrams from jaina cosmology.[5] Most of the paintings and illustrations depict historical events, known as Panch Kalyanaka, from the life of the tirthankara. Rishabha, the first tirthankara, is usually depicted in either the lotus position or kayotsarga, the standing position. He is distinguished from other tirthankara by the long locks of hair falling to his shoulders. Bull images also appear in his sculptures.[6] In paintings, incidents of his life, like his marriage and Indra's marking his forehead, are depicted. Other paintings show him presenting a pottery bowl to his followers; he is also seen painting a house, weaving, and being visited by his mother Marudevi.[7] Each of the twenty-four tirthankara is associated with distinctive emblems, which are listed in such texts as Tiloyapannati, Kahavaali and Pravacanasaarodhara.[8]

A monolithic, 18 m statue of Bahubali referred to as "Gommateshvara", built by the Ganga minister and commander Chavundaraya, is situated on a hilltop in Shravanabelagola in the Hassan district of Karnataka state. This statue was voted as the first of the Seven Wonders of India.[9]

Ayagapata (Hindi:अयागपट्ट) is a type of votive slab associated with worship in Jainism. Numerous such stone tablets discovered during excavations at ancient Jain sites like Kankali Tila near Mathura in India. Some of them date back to 1st century C.E. These slabs are decorated with objects and designs central to Jain worship such as the stupa, dharmacakra and triratna.[10]

A large number of ayagapata (tablet of homage), votive tablets for offerings and the worship of tirthankara, were found at Mathura.[11]

These stone tablets bear a resemblance to the earlier Shilapatas - stone tablets that were placed under trees to worship Yakshas. However, this was done by indigenous folk communities before Jainism originated suggesting that both have commonalities in rituals.[10] A scholar on Jain art wrote about an Ayagapata discovered around Kankali Tila,"The technical name of such a tablet was Ayagapata meaning homage panel." [12] 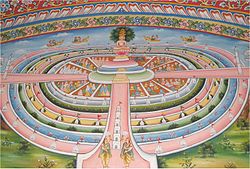 Depiction of Samavasarana is a popular theme in Jain art. Samavasarna is the divine preaching hall of the tirthankara.

A monolithic manastambha is a standard feature in the Jain temples of Mudabidri. They include a statue of Brahmadeva on the top as a guardian yaksha.[13]