From Infogalactic: the planetary knowledge core
(Redirected from Pratitya-samutpada)
Jump to: navigation, search

Pratītyasamutpāda (Sanskrit: प्रतीत्यसमुत्पाद; Pali: पटिच्चसमुप्पाद paṭiccasamuppāda), commonly translated as dependent origination or dependent arising, states that all dharmas ("things") arise in dependence upon other dharmas: "if this exists, that exists; if this ceases to exist, that also ceases to exist." It is a pragmatic teaching, which is applied to dukkha and the cessation of dukkha.

The term is also used to refer to the twelve links of dependent origination, which describes the chain of causes which result in rebirth. By reverting the chain, liberation from rebirth can be attained.

The term has been translated into English variously as dependent origination, dependent arising, interdependent co-arising, conditioned arising, and conditioned genesis. The term could be translated somewhat more literally as arising in dependence upon conditions.[citation needed][note 1][quote 1]

According to Bowker, pratityasamutpada means that

... all physical and mental manifestations which constitute individual appearances are interdependent and condition or affect one another, in a constant process of arising and ceasing.[9][quote 3]

A key formulation of pratityasamutpada is idappaccayatā(Pali) or idaṃpratyayatā (Sanskrit), "specific conditionality" or "this/that conditionality":[quote 4]

This is, because that is.

Relation to other Buddhist concepts

The principle of dependent origination is a key element in other Buddhist teachings.

The principle of dependent origination underpins the concept of karma, the individual actions and their fruition.[quote 6] Every fruition is said to depend upon multiple causes and conditions.[quote 7] 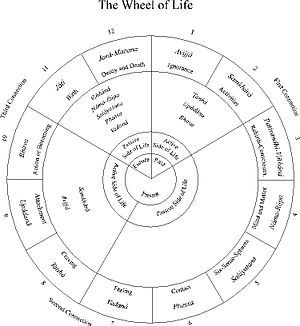 The Twelve Nidanas are a series of causal links that describe the process of samsaric rebirth and the arising of dukkha. In reverse order they also describe the way to liberation from samsara.[note 2] When certain conditions are present, they give rise to subsequent conditions, which in turn give rise to other conditions, resulting in the cyclical nature of life in Samsara.

Understanding within the Buddhist traditions

In the Theravada-tradition, Pratityasamutpada implies that "several causes give rise to several results:"[18]

Within the Theravada Buddhist tradition, the twelve nidanas are considered to be the most significant application of the principle of dependent origination.[quote 9]

In the Madhyamaka, to say that an object is "empty" is synonymous with saying that it is dependently originated. Nāgārjuna equates emptiness with dependent origination in Mūlamadhyamakakārikā 24:18;[19]

Is explained as empty.
Thus dependent attribution
Is the middle way.

In his analysis, any enduring essential nature (svabhāva) would prevent the process of dependent origination, would prevent any kind of origination at all, for things would simply always have been and will always continue to be, i.e. as existents (bhāva). Madhyamaka suggests that impermanent collections of causes and conditions are designated by mere conceptual labels, which also applies to the causes and conditions themselves and even the principle of causality itself since everything is dependently originated (i.e. empty).[21] If unaware of this, things may seem to arise as existents, remain for a time and then subsequently perish.

In the Dzogchen tradition of Tibetan Buddhism, the concept of dependent origination is considered to be complementary to the concept of emptiness. Specifically, this tradition emphasizes the indivisibility of appearance and emptiness—also known as the relative and absolute aspects of reality:[22]

In Mipham Rinpoche’s Beacon of Certainty, this relationship is explained using the metaphor of the reflection of the moon in water.[22] According to this metaphor:[22]

One of the founders of Tibetan Buddhism, Padmasambhava, emphasized his respect for this relationship as follows:

Though my View is as spacious as the sky,

My actions and respect for cause and effect are as fine as grains of flour.[23]

The Huayan school taught the doctrine of the mutual containment and interpenetration of all phenomena, as expressed in Indra's net. One thing contains all other existing things, and all existing things contain that one thing. This philosophy is based in the tradition of the great Madhyamaka scholar Nagarjuna and, more specifically, on the Avatamsaka Sutra. Regarded by D.T. Suzuki as the crowning achievement of Buddhist philosophy, the Avatamsaka Sutra elaborates in great detail on the principal of dependent origination. This sutra describes a cosmos of infinite realms upon realms, mutually containing one another.

The Mahayana presentation of pratītyasamutpāda (and shunyata) has been compared to the scientific theory of quantum mechanics (there is a variety of interpretations of quantum physics, including deterministic ones) — the contemporary branch of physics that examines matter on atomic and subatomic levels.[quote 10] The doctrine of pratītyasamutpāda has also been compared to modern systems theory.[quote 11] Bhikkhu Thanissaro relates the Buddhist concept of causality to modern deterministic chaos theory.[quote 12]

Jay Garfield points out the similarities between pratītyasamutpāda and the philosophies of Hume, Kant, and others.[quote 13]

The concept of pratītyasamutpāda has also been compared to the Western philosophy of metaphysics (the study of the nature of being and the world). Bhikkhu Thanissaro explains that the Buddha did not intend to put forth a system of metaphysics,[quote 14] yet, scholars have noted the similarities between pratītyasamutpāda and metaphysics.[quote 15] One source (Hoffman, 1996) asserts that pratītyasamutpāda should not be considered a metaphysical doctrine in the strictest sense, since it does not confirm nor deny specific entities or realities.[quote 16][note 4] Noa Ronkin notes that while the Buddha suspends all views regarding certain metaphysical questions, he does not deny the significance of the questions.[quote 17]

Bhikkhu Thanissaro relates the Buddhist concept of karma to the modern philosophy of radical phenomenology.[quote 18]

One of the basic ideas behind the Buddha's teaching of mutual interdependence is that ultimately there is no demarcation between what appears to be an individual creature and its environment. Pratityasamutpada has been applied to explain the interconnectedness of all being,[quote 19] as expressed in the metaphor of Indra's net, or Thich Nhat Hanh's "interbeing".[note 5]

Harming the environment (the nexus of living beings of which one forms but a part) is thus, in a nontrivial sense, harming oneself. This philosophical position lies at the heart of modern-day deep ecology and some representatives of this movement (e.g. Joanna Macy) have shown that Buddhist philosophy provides a basis for deep ecological thinking.